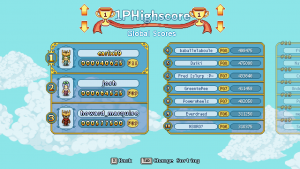 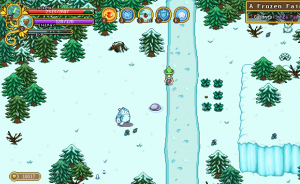 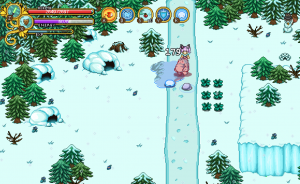 
Wow! I’m loving that Shadow Clone animation! Very nicely done! Especially the way the face tilts upward. I also think you guys should go through with the snow cave spawning idea. It would give them some purpose and it would be cool to have something else function like the beehives.


I agree with Antar.

1. Any thoughts on adding filters such as xBRZ?

2. Any chance of getting more/higher screen resolutions?

1. Maybe some day as an option for those who want it! It’s not high priority though.

2. Perhaps! It’s not much use, though, since the main reason for wanting higher screen resolution is to fill the screen, which can be done by changing to full screen. The resolutions are currently constrained to multiples of 640×360 because anything else will squash the pixels and make the game look worse!


@Zorlac: Why would one want to have filters? It would destroy the whole pixel style.


Oh my god O.o you guys are amazing :|
Pls keep adding such decorations like on the balcony it looks so beautiful !
Snowcaves and the Shadow clone….
I´m so looking forward to this