Another week has ended, in which Teddy finally ha gotten around to work on the infamous cutscene! While there’s still a lot of work to be done, the groundwork has been laid and some interesting reveals will take place… 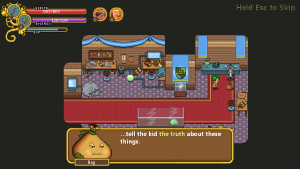 What in the world could the Bag mean? Hang in there and you’ll find out in time!

Fred has kept working on stuff for the festival, mainly NPC flavor animations and the such to help the festival feel alive and bustling!

Meanwhile, Vilya has been working on a bunch of different things, including giving the Shady Merchant a shop title of his own:

As mentioned before, he will start selling items you’ve previously sold to other NPCs, making it possible to buy back stuff you regret parting with. We thought a fun thing to do would be to increase the amount of items surrounding him as you sell more and more stuff to the other shopkeepers. Right now we’ve made 6 different steps:

There’s also a bunch of new hats (and next week there will be even more!): 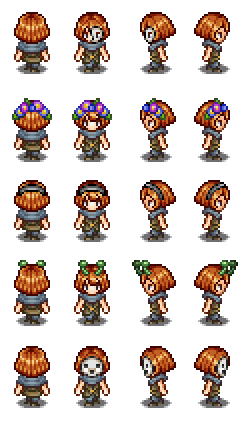 Vilya also made a bunch of icons for upcoming achievements, including getting 10 and 20 cards, as well as catching all pets & fishes (though the later two won’t be implemented until the game is done, as we’ll keep adding both pets and fishes until that point):