This week I (Vilya) have finally started working on Puzzle World, the small extension of Tai Ming’s second zone set in the north! It’s been a blast – but first, let’s take a look at something I forgot: the Giant Thorn-Worm boss portrait!

Based on Fred’s sprite, the Giant Thorn-Worm boss portrait is pretty straight forward, as it’s.. well, just a worm. Of course, it had to be adjusted in some ways: for one, it needed to be a lot longer than it is in the sprite, or it’d barely reach above the title text! I also added a few more spikes to its back.

Other than that, I tried to stay true to the sprite. Perhaps I could have added some texture to its skin, and maybe I will at a later stage – but I think it’s important that the boss portrait resembles the actual sprite as much as possible, especially when the sprite is as big as the Giant Thorn-Worm is.

As for the boss title itself, the main title will be “Giant Thorn-Worm”, with “The Threat from Below” as its sub-title. This is actually a reference to the movie Tremors, which was known as “Hotet från Underjorden” (The Threat From Below/the Underground) when it came to Sweden! 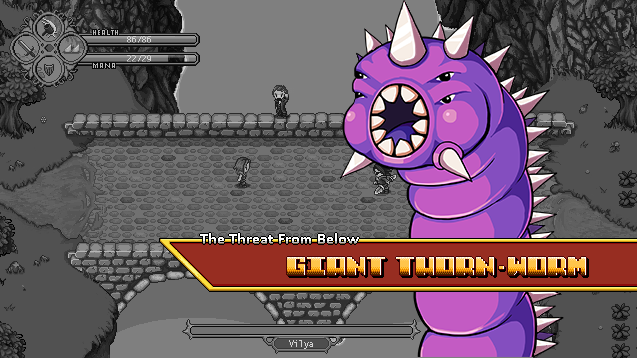 And now…. It’s time to begin! Using the sketches from last week, I’m going to create the backgrounds for each of the Puzzle World rooms. It’s gonna be a lot of fun, since this place will be totally different from everything else in Tai Ming graphics wise: bright colors and crazy color combinations everywhere! Wohoo!

To celebrate a completely new set of graphics, here’s a video showing the process of creating this room! Videos are definitely more fun to do when there are a lot of new graphics involved, so I’ll probably do one or two graphics for each new area, rather than spam a ton of videos of me recoloring and reshaping previously made objects from now on:

After finishing recording the video, I decided to add and change a few minor things before the finished room. First up, moving the question mark poster to the front – in the back it could be anything, and I think it’s unnecessary to confuse players about it:

Next. adding some balloons. I mean, it’s a theme park, after all – so it’s not really complete without a few balloons. Right?

Third, in the original sketch I had a “cool effect” around the first door of the theme park, which felt a bit redundant after I completed the rest of the room. However, after giving it some thought, I wanted to try creating it after all – in the worst case we’ll simply remove the effect again, but for now I kind of like it:

Here’s the finished first room after these changes: 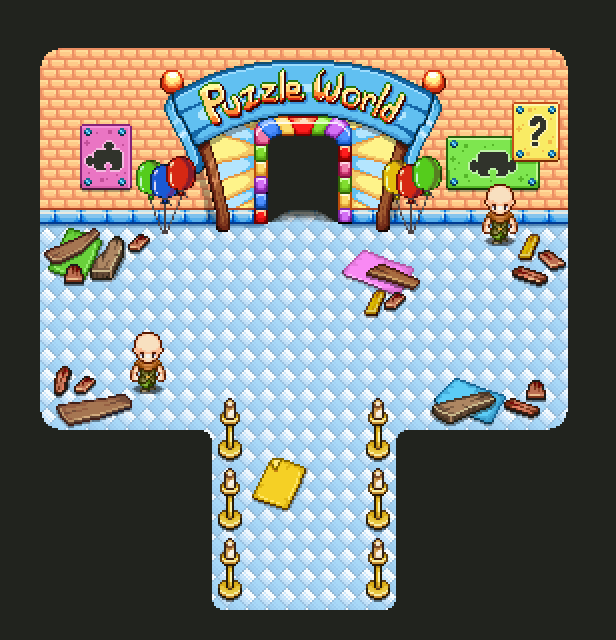 And now: the first actual puzzle room of this brand-new theme park! This one is focused on statues, but solving it won’t be as easy as you might have thought – you see, the guys building the puzzle haven’t actually finished it yet, so you’ll have to figure out another way to get out of here.. :)

A step-by-step GIF of the design! Since most of the wall and floor stuff has been made already, there’s a lot less to do in this room. The banners are actually reused from the HQ (though resized and remade just a tiny bit), while the pillars and the puzzle parts on the floor had to be made from scratch.

Next, some half-built puzzle blocks in wood, lying around on the floor:

These puzzle blocks are made in wood and are supposed to be based on the ‘real’ puzzle blocks you find out and about in the world of Grindea. However, I chose to make these in wood so that when you travel to the present to fight enemies, there aren’t a bunch of puzzle blocks blocking your way as you battle – they have decayed and only planks will be left on the floor, which have no colliders.

It also serves to remind people that the guy who build this theme park is kind of cheap and would rather build the puzzle blocks in a cheap material than order the more expensive plastic- or stone versions… ;)

Finished version of the room: 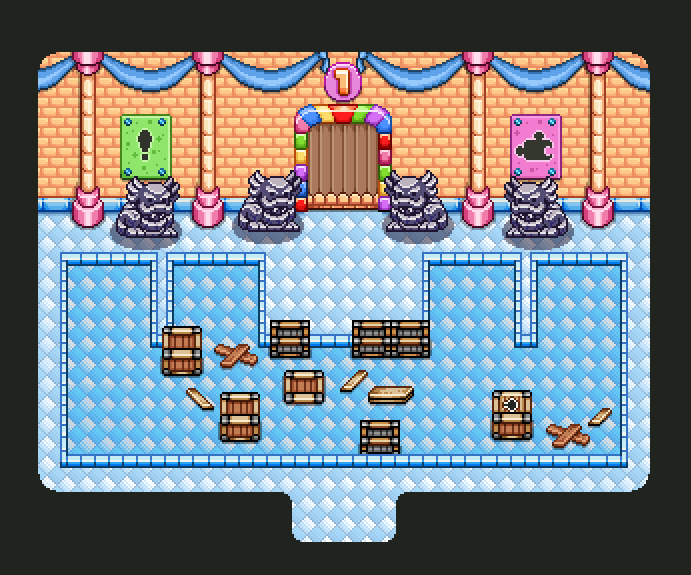 Now, after focusing so long on Tai Ming’s second zone, it’s finally nearing completion and we can look on to the third and final zone! As such, we had a meeting where we discussed exactly how it will look and what will take place here… 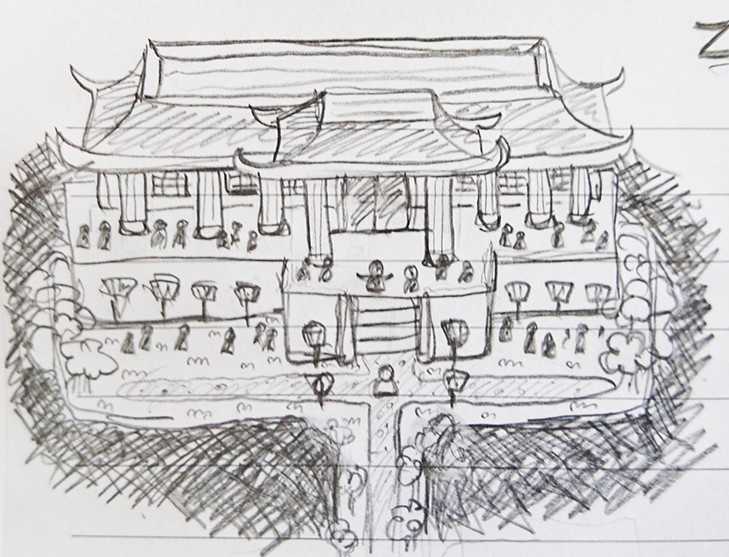 Since the second zone has become quite big and advanced, we agreed that it’s best to keep the third zone smaller and a lot more straight forward, in order to pace things well. When you first enter this zone, you will see a weird celebration and a bunch of strange things happening in front of a lot of people outside an ancient shrine! I know I’m vague, but it’s gonna be really cool if we get it right! 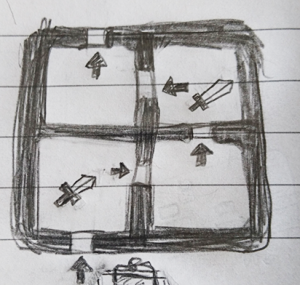 Next, you’ll be sent back to the present, where you’ll make your way through the shrine itself. Here you’ll be sent back and forth in time seemingly randomly – the time warp thing has gone crazy it seems! There will be some battles and some cutscenes explaining what’s happening next, and things are getting quite scary..!

Finally, you’ll reach your destination: outside, on the other end of the shrine, is a meadow with an altar at the end. At the altar, you’ll find an artefact, and not one but two epic fights draw close…

I’m so excited to begin making the third zone now that it’s been designed much more thoroughly and I almost feel like the end of the temple is within grasp! Of course, there’s still a lot of stuff left (we’re still not done with the second zone, after all!), but having it all designed really helps a lot with looking ahead :)

Oh yeah, meanwhile, Fred has been finished one NPC after another! Soon all of Tai Ming will be full of people :D


The Puzzle World door effect is really cool. I think you should keep it! It makes it feel a lot more theme park-y.


I also like the door effect! Thanks for the updates guys, the work you do is amazing!! <3


Love the hat merchant! Makes me want to buy everything they have :)

You guys have kept the quality at astounding levels. Gonna buy me friend a gift copy once stuff this land on stable!