Hello guys! It’s been another week, and now I (Vilya) am back with another recap of the big things we’ve been working on :D

This week, the work on Puzzle World continues! Next step is to transform the Statue Room into it’s sorry present state. Since this will be the first room to be turned into a present version, it’s extra important to get everything right since a bunch of the props, such as the planks, will be reused in upcoming rooms.

Here’s a GIF showing the process:

As usual with transforming rooms or environments from past (fresh & new) to present (old and worn), most of it is changing colors. But just turning a bright yellow into a dull brown won’t cut it in many cases, such as the door: as wood grows old, it will get worn down and cracks may appear. Therefore I added more lines in the wood, as well as holes here and there, where I imagine the wood has been broken over time: 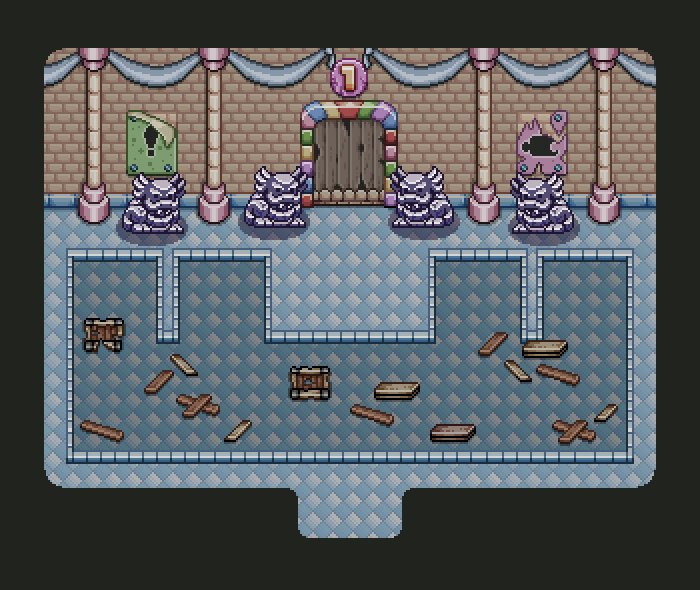 Next room is a little different! It’s been sponsored by the Flying Fortress crew, and so it has been decorated to look like a room in Flying Fortress – only with wallpapers and a fake floor… :)

When creating this room, I had two options. Either I use the already-made texture of the Flying Fortress walls & floor, or I make a new one. It’s likely people wouldn’t be able to tell the difference, since it was so long since you went through the Flying Fortress in the main story – but I still opted to make new graphics.

I did this for two reasons: one, it gave me the opportunity to make the texture look even more like a wallpaper texture – instead of looking exactly like it does in Flying Fortress (which is built of what’s at least supposed to be real rocks), I could make a softer texture which would be easier to pass off as wallpaper. Second, the Flying Fortress graphics are very old at this point, and I worried that adding such an old texture among all the new stuff would look jarring – I’ve developed a lot as an artist since that time, so the difference in quality and style is quite big. 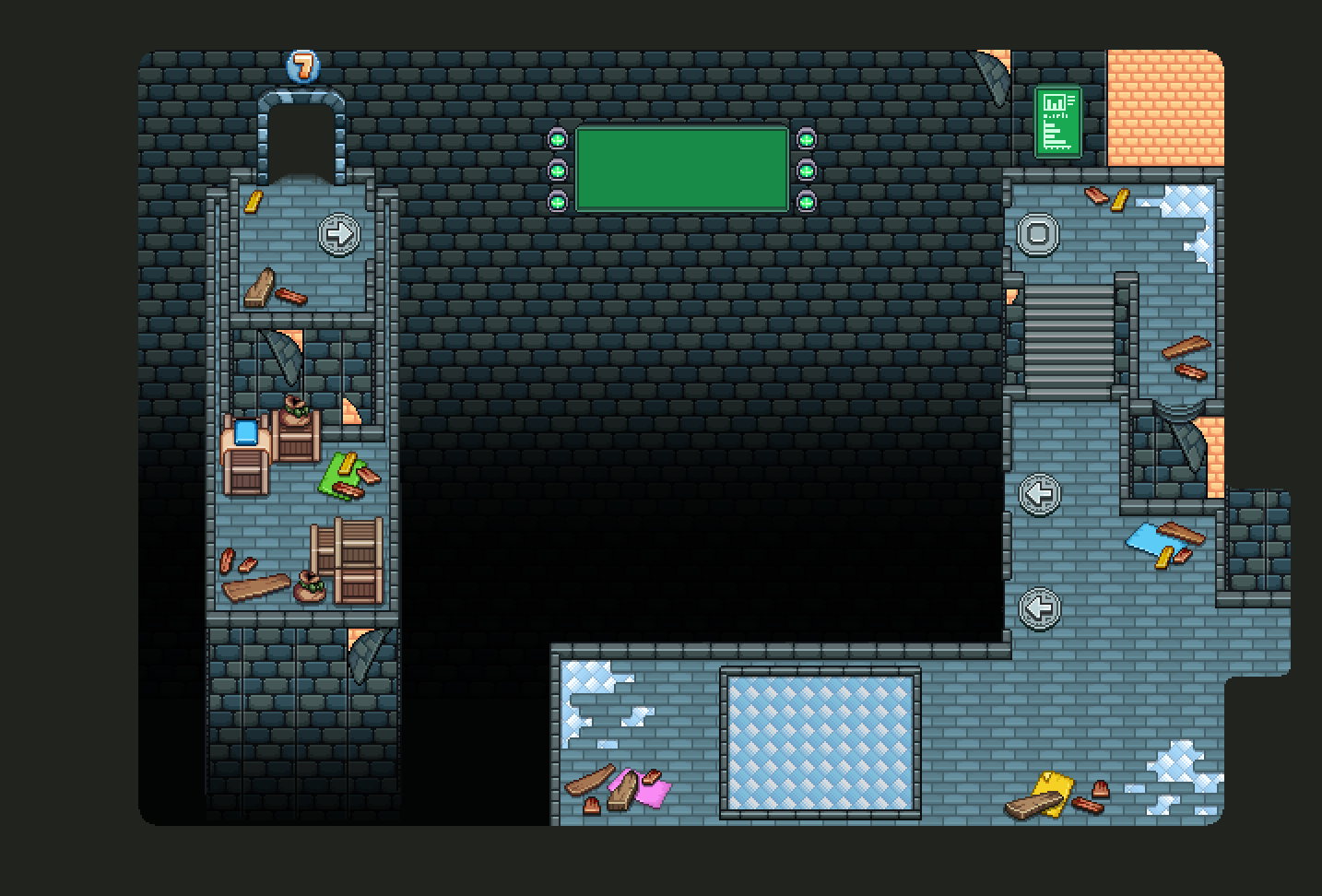 Since this room is already quite gloomy to begin with, it was a bit of a challenge to darken and dull the colors down without everything becoming too dark for the present version. Instead of going too crazy with the darkening effects, I decided to ruin more of the wallpaper around the areas where you’ll run around, having the real wall show through:

After finishing the past version, I added a pair of boxes that block the exit to the right. In this version however, the boxes are moved (since you enter the room in this timeline) and instead block your path to the top part of the room. To get there, you’ll need to complete the phase shift puzzle! 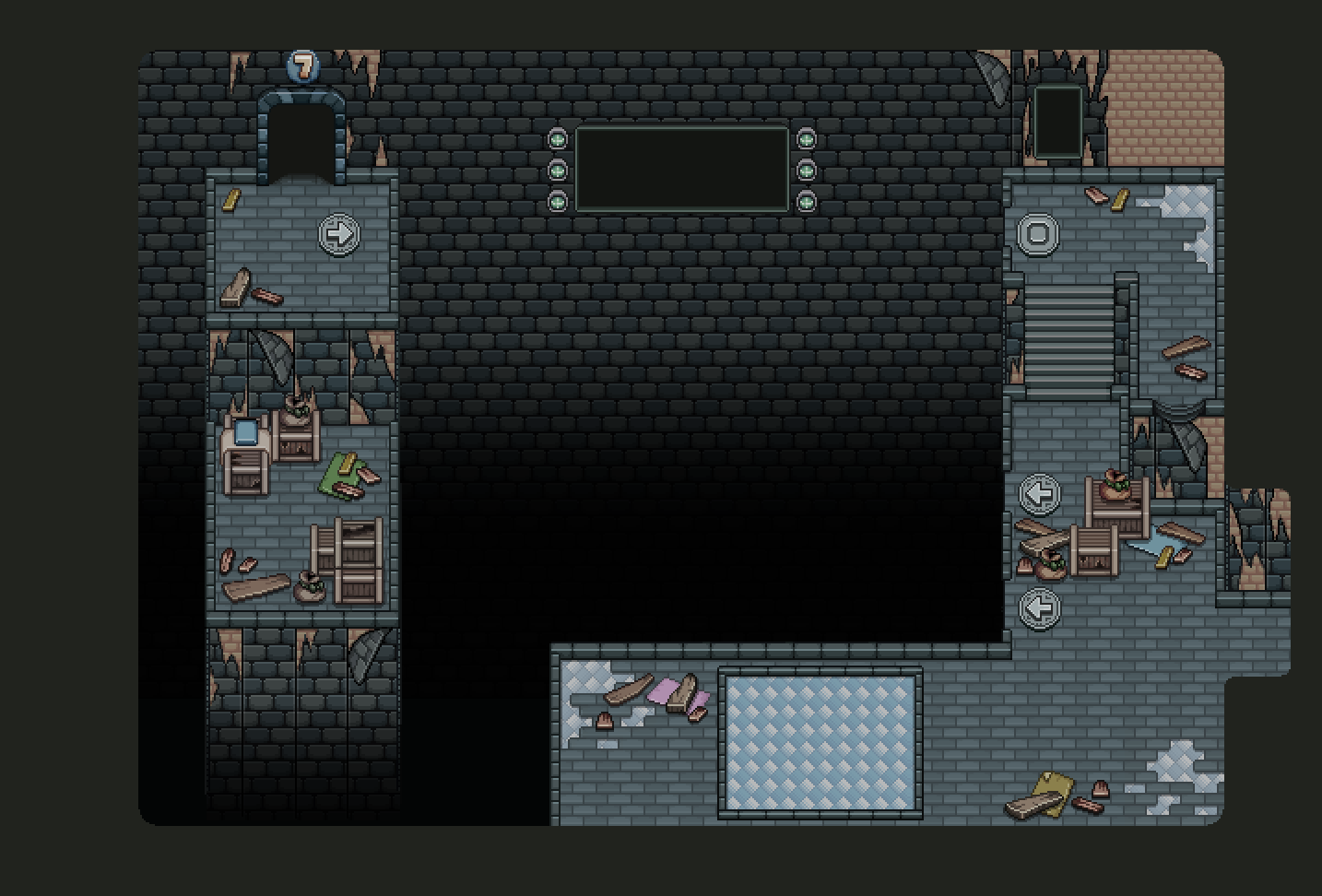 And yes, for those who noticed the difference between the Past and Present version: we decided to change the design of the left platform a little, as the previous version was a little hard to read for some people. The previous version is to the left, the new version to the right: 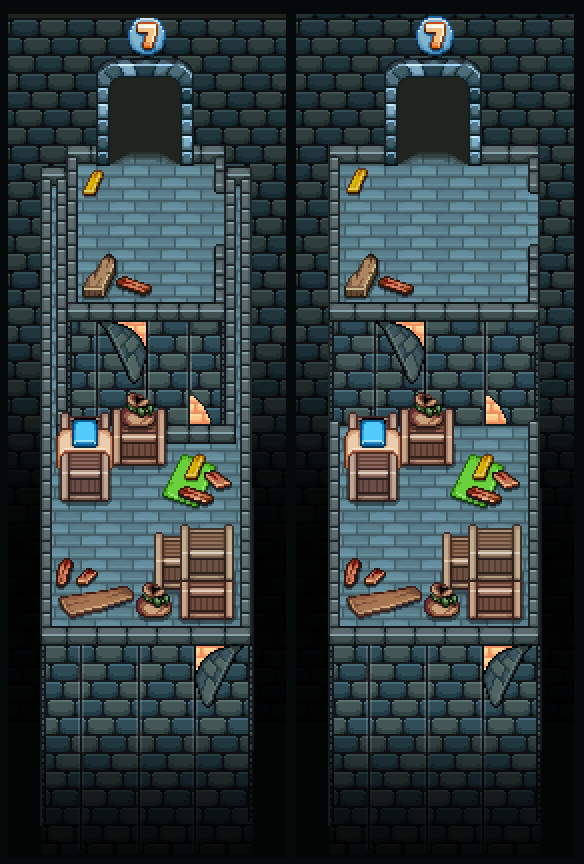 Next, after Fred finished adding some NPCs to the inn (left), I took over and added some props that I thought would suit them:

The girl on the right is a bit underage, so instead of drinking she’s having a meal while studying hard to become a Collector like her sister (which will also be added to the table later on). Faita, the sword teacher from the first zone, is kind of drowning her disbelief at being second best at everything with a glass of unnamed alcohol (or is it soda?) ;)

Meanwhile, instead of cleaning up the bar, Montbel the owner (who isn’t present in the picture) has left all kinds of bottles and bowls on it for visual effect. ‘Aint he nice?

Speaking of NPCs, Fred has kept working on adding more of them to Tai Ming’s second zone, so here’s another bunch:

Finally, let’s end the week with a portrait! I actually forgot I still had two more to make for the second Tai Ming zone. Guess I got a little bit too excited about starting to make backgrounds for Puzzle World!

This guy is a hat salesman, having his shop set up outside the ancient Collector’s HQ. Like the hat salesman in Evergrind City, he has a kind of elegance to him! I guess it comes with the job, huh?