Hello guys, Vilya here! The first week since the second part of Tai Ming was uploaded to Frontline has now gone past, and we’ve spent eagerly listening to your feedback (and fixing bugs)! Thank you to everyone who left comments and suggestions, we’ll add and improve a bunch of things before we consider this part properly done.

Some of you have already noticed that after finishing the first zone, it’s possible to get stuck, with the time warp portals disappearing. While this isn’t quite working as intended, the truth is that once you’ve finished an area, you’ll only be able to return to it in the present time.

We have a couple of reasons for this, and it wasn’t an easy choice to make. I mean, of course it would have been great if you could always go back to finish any puzzles or secrets you might have missed. On the other hand, we felt like the area would have a bigger impact once you realize that when you’ve seen all there is to the story here, you can’t go back to talk to the people again. They have passed on already and belong only in a distant past which you shouldn’t have had access to in the first place.

We also didn’t want the player to feel frustrated because they can’t go back to, say, the first zone, and simply try to convince Zhamla or Sizou to change their ways once you realize how events in that zone turned Zhamla from a young, optimistic boy into a serious and rather obsessed young man.

We could have just simply not mentioned the fact, or thrown in a line about not changing past events, but again, this way felt like it’d have more of an impact.

Now, obviously you’re not supposed to get stuck anywhere in the present. So how are we gonna solve the fact that there are a ton of blockades that you need time travel to get past?

This fellow is a traveling adventurer (with dreams of becoming a Collector, perhaps?) who you’ll meet many times on your journey. Once you’ve finished the first part of Tai Ming, he’ll arrive to move things out of the way and create a passage that you can use as well. Once you’re done with the second zone, he’ll move on and do the same there.

So what about all the treasures you might have missed on your first play through? Worry not, you’ll be able to get them later in the game, one way or another (we have a bunch of ideas), so missing an item in Tai Ming won’t affect your 100% completion if you manage to find it somewhere else later. 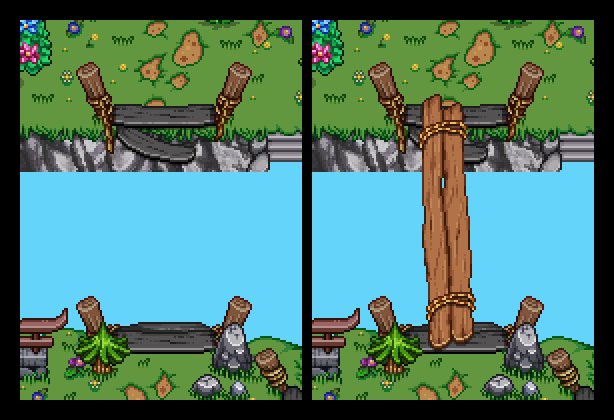 After all, hundreds of years have passed since the time when Tai Ming was a bustling town, and it’s not unlikely that once you stop messing around with the time jumps, someone simply moved the items somewhere else.

With this new information, it might be worth going through Tai Ming one more time to see if you missed any secrets, would you say? Head out and collect! The 100% completion awaits you!

Next up, in celebration of having completed my part of Tai Ming’s second zone, I decided to take a quick break from the asian theme and move back to Evergrind City and its surrounding fields!

This map here is in fact the one that can be found north of the farm, in the western Evergrind Fields! It’ll be the key to opening the final dungeon, but until you figure out how to do that it’s just a bunch of resting ruins in the middle of the woods.

For this area, I began with a very simple sketch just to get a feel of the layout. Then I added a bunch of the surrounding props (trees, and the like) with our editor, before creating the new stuff: 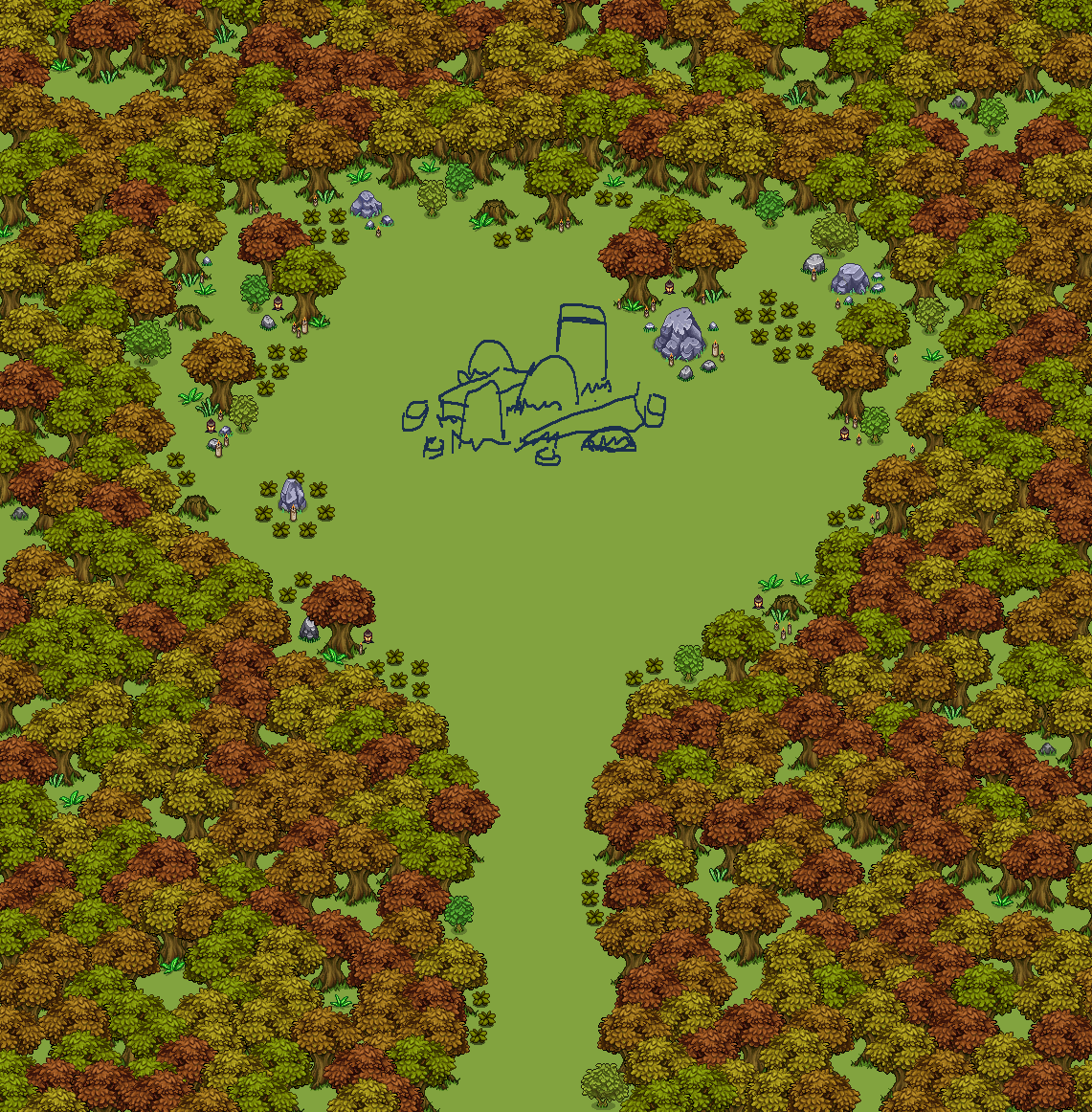 Then, it’s on to making the actual ruins:

And finally, adding all the details to bring the place together: 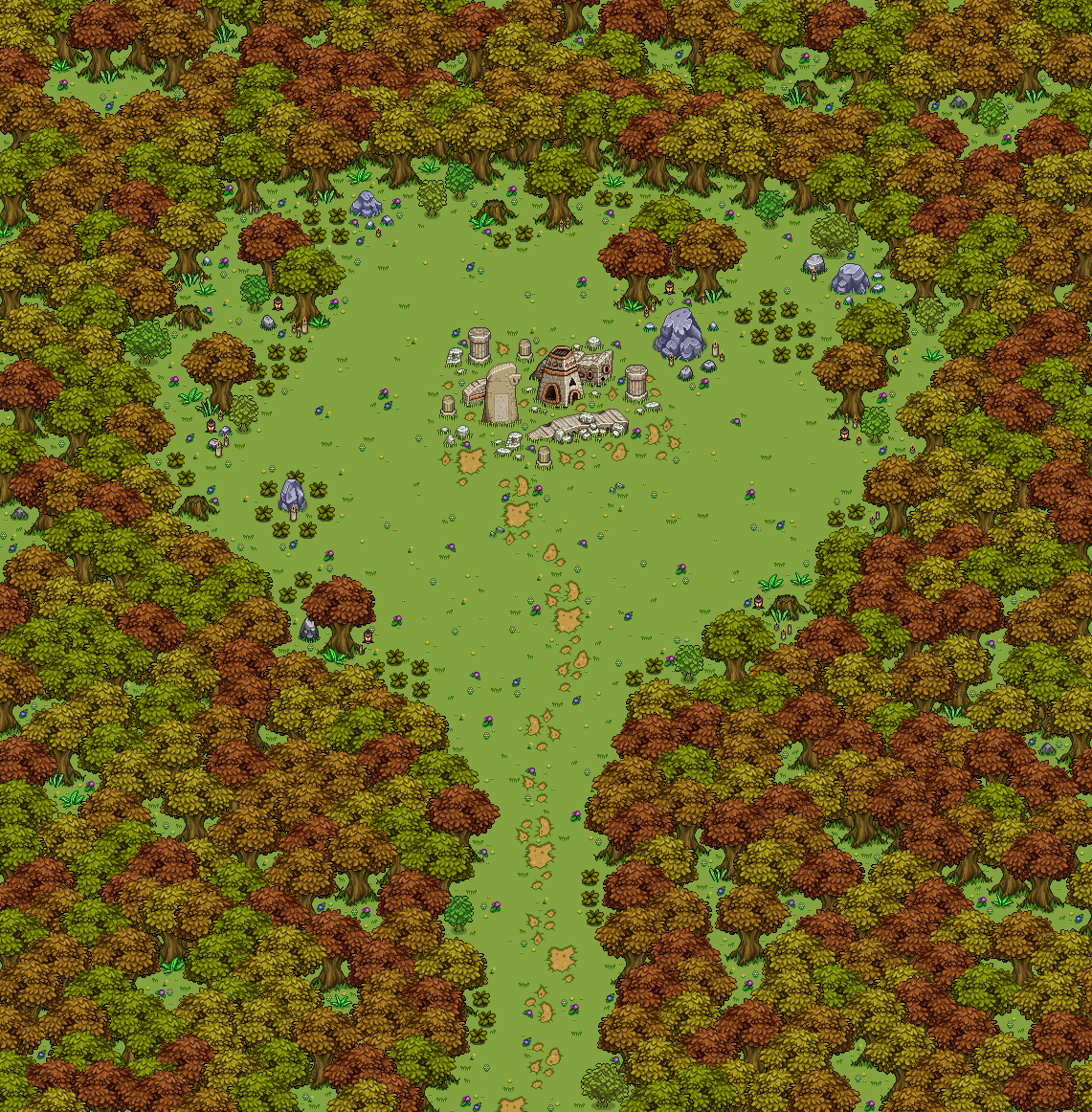 While this map likely won’t be implemented until all three zones of Tai Ming are completed, it’s been on my mind for a long time, and I’m sure the “this way is blocked until we implement temple x” notice has bothered a lot of you guys as well! This way, at least you’ll be able to move around almost everywhere (with the exception of the desert and onwards, which hasn’t been added yet of course) without annoying notices!

And now, time to start working on Zone03. We’ve already begun prototyping most of the area, with the exception of the final two rooms (one which will house the Mimic boss, and one which will feature… something else). 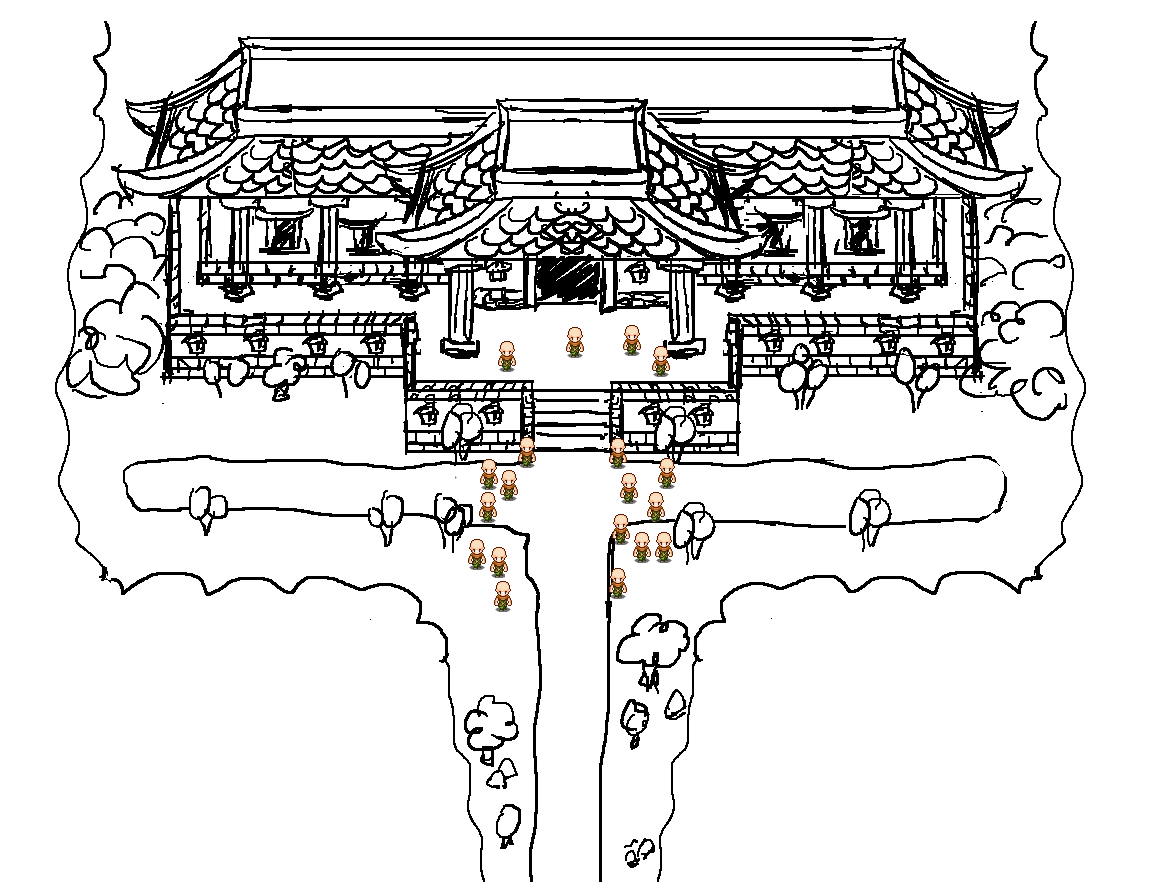 Our very first prototype consists of extremely simple black & white sketches, where I just draw whatever I think would look cool. I mainly freestyle the size of each map, but try to keep in mind certain things like whether there will be battles taking place, or where the camera will pause in cutscenes and such. 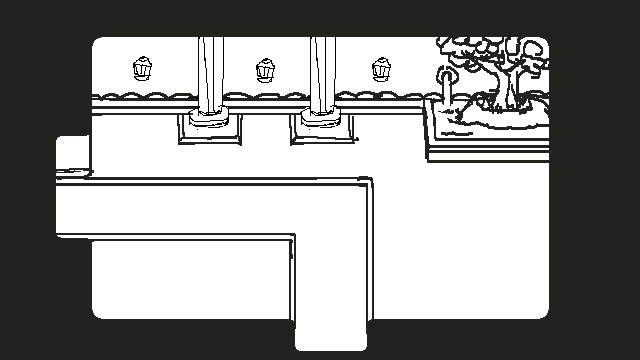 Once I’ve sketched whatever I feel is important to size-check or run by the others, I give the sketches to Teddy who adds them to the game engine. He won’t add any colliders or anything at this point, but often he’ll make sure the doors work in cases like this where we need to run through more than one map connected to one another. 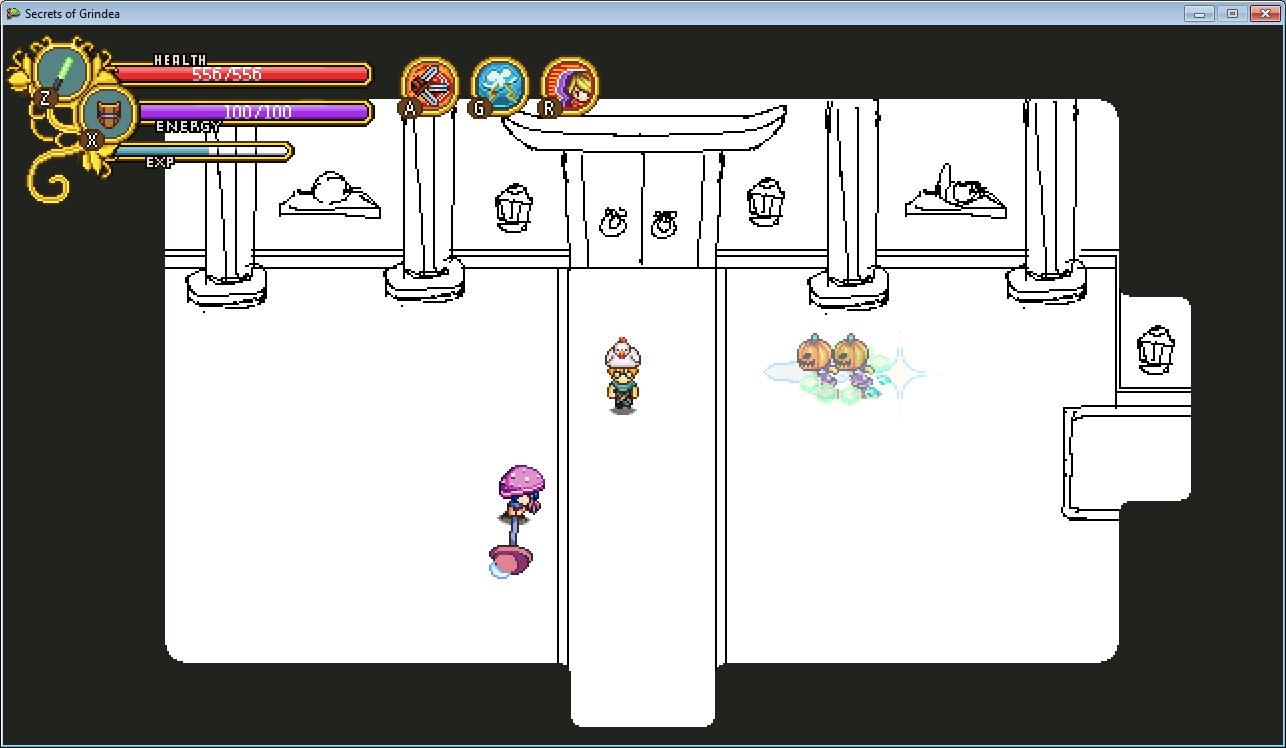 Then, me, Teddy and Fred run through the maps in multiplayer, talking about what we think as we go along. Are the rooms big enough? Will there be enough room to fight? Does the camera position well? 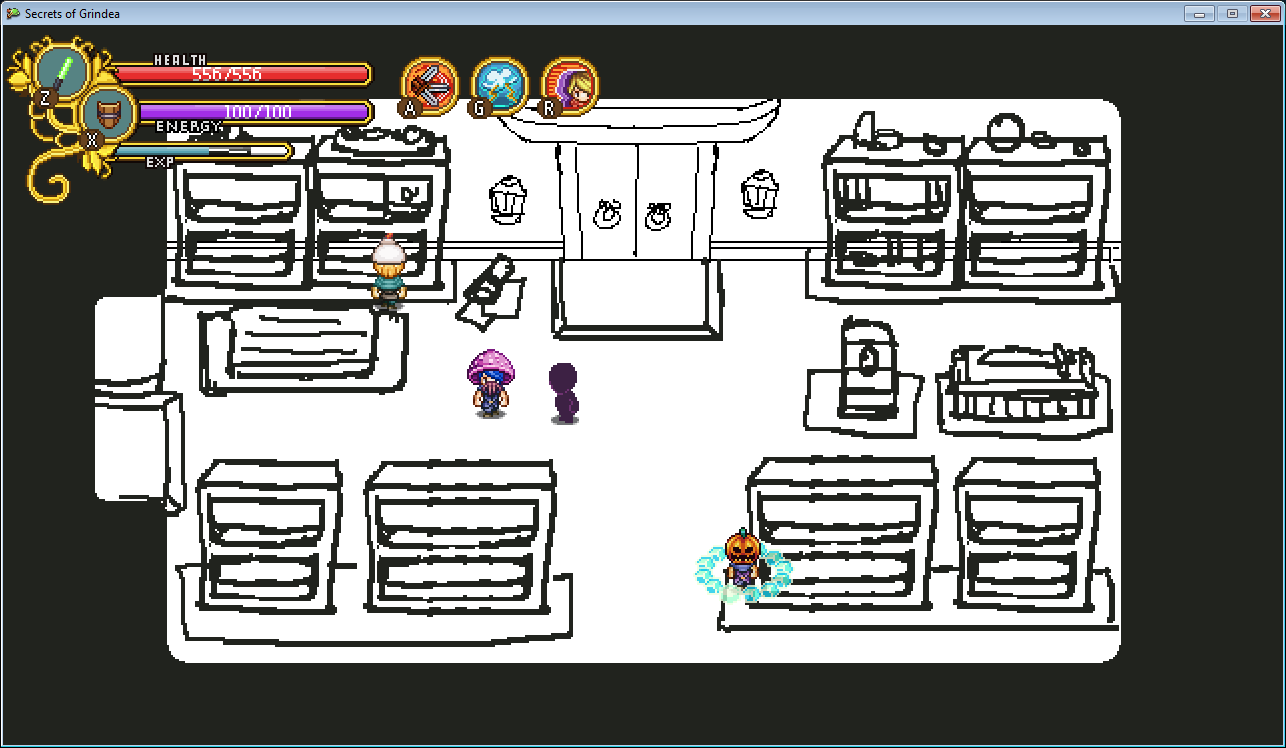 Often I’ve come up with ideas for what should happen in the rooms, either before or while I make the sketches, and in this multiplayer test we tend to brainstorm a lot as well. We’ll ask ourselves things like “wouldn’t it be cool if this happened here”, or “wouldn’t it be nice to have a painting of x there”, among other things. 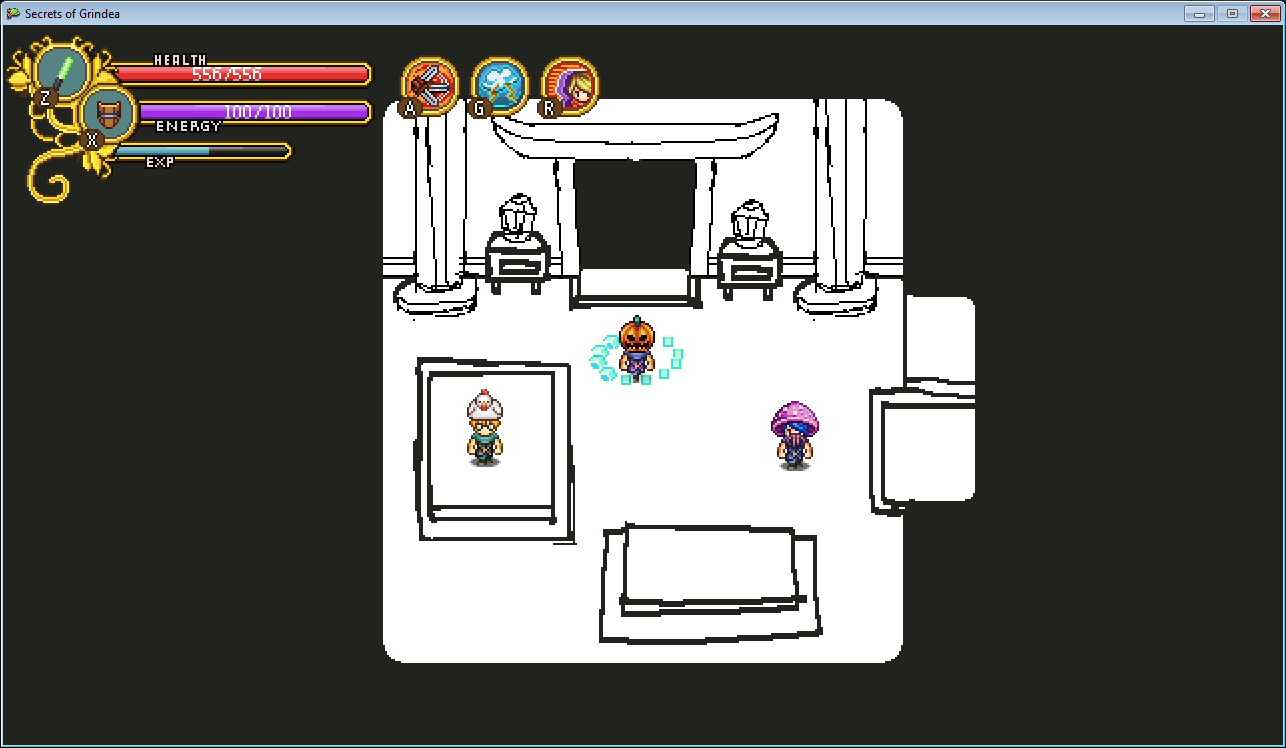 In the case above, I made a design with 2 tables, but as we talked about what the flashback orb will show in this room, we decided it’d be better to have it take place at one long table instead. We talked about how long the table should be, and two of us had to act as indicators so I could take a screenshot and add a table approx. the size the characters show (plus some more decorations): 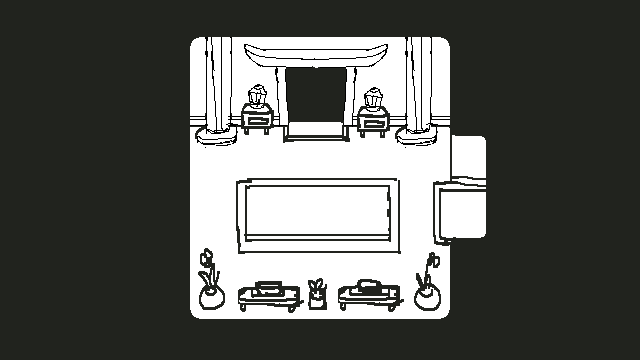 After going through each of the rooms in a similar way, with us talking about the sketches and me editing them as per what we decide, we’ve got a decent “whitebox” version of the place. There are no final graphics, but since we’re satisfied with the size, it’s possible to start adding colliders as well as prototyping enemy encounters.

Since this zone is only four rooms, two outdoor areas and a boss fight, we certainly hope finishing this place will be faster than zone02. There will be a lot of epic things happening here though, so I guess we’ll have to wait and see how many super difficult animations Fred will have to make before we’re satisfied…. Stay tuned ;)


I can’t wait to get my hands on these new updates, the game just keeps getting better and better!