Time to move into the sacred shrine! What could be hidden in here?

The first room is planned to be a room where you’ll do some fighting and… well, not much else really! Now, we haven’t even planned on adding a flashback orb to this place, which means that technically, this room will only be viewed in the present (there will be no time rifts in this third part of Tai Ming).

Because of this, I could have chosen to jump into doing the old and ruined stuff from the beginning, and completely skipped this step of making a past version. However, because we’re known to change our minds a lot, and since it’s a lot easier to start from something whole and ruin it after, than to start with something broken and paint it whole, I decided to make this version anyway!

Below is the finished result! Again, it’s possible you won’t even get to see this in the game, so I guess you could see it as a true behind-the-scenes treat ;) 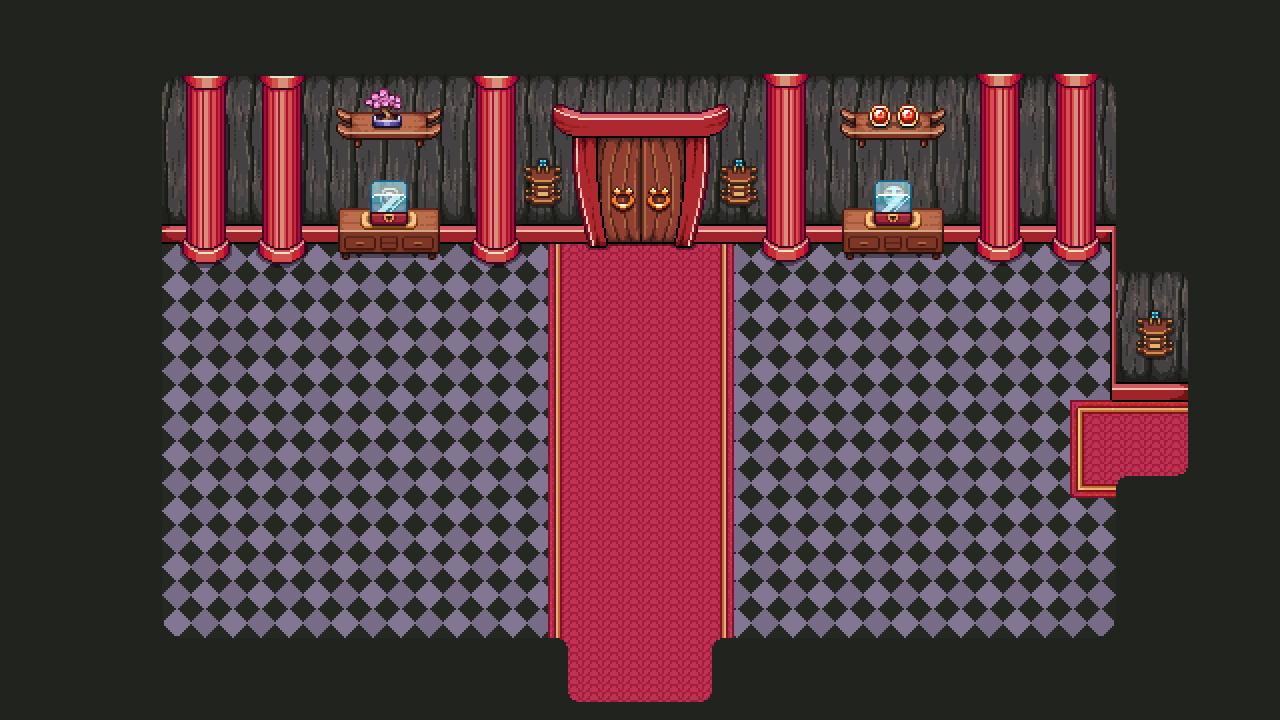 Next up, making the ruined version, which might even show up in the game!!

As usual, this is typically a matter of dulling down color and painting a bunch of cracks and holes in everything.

For this room, I also added a bunch of thrash in the corner which may serve as a spawning point for monkeys when you fight (it looks much better if they appear from behind somewhere, rather than just fade into existence)!

Since you’ll mainly be fighting in here, there’s not a lot of stuff on the floor (as usual). In the end the room will hopefully look lively enough one there’s a bunch of enemies roaming about! 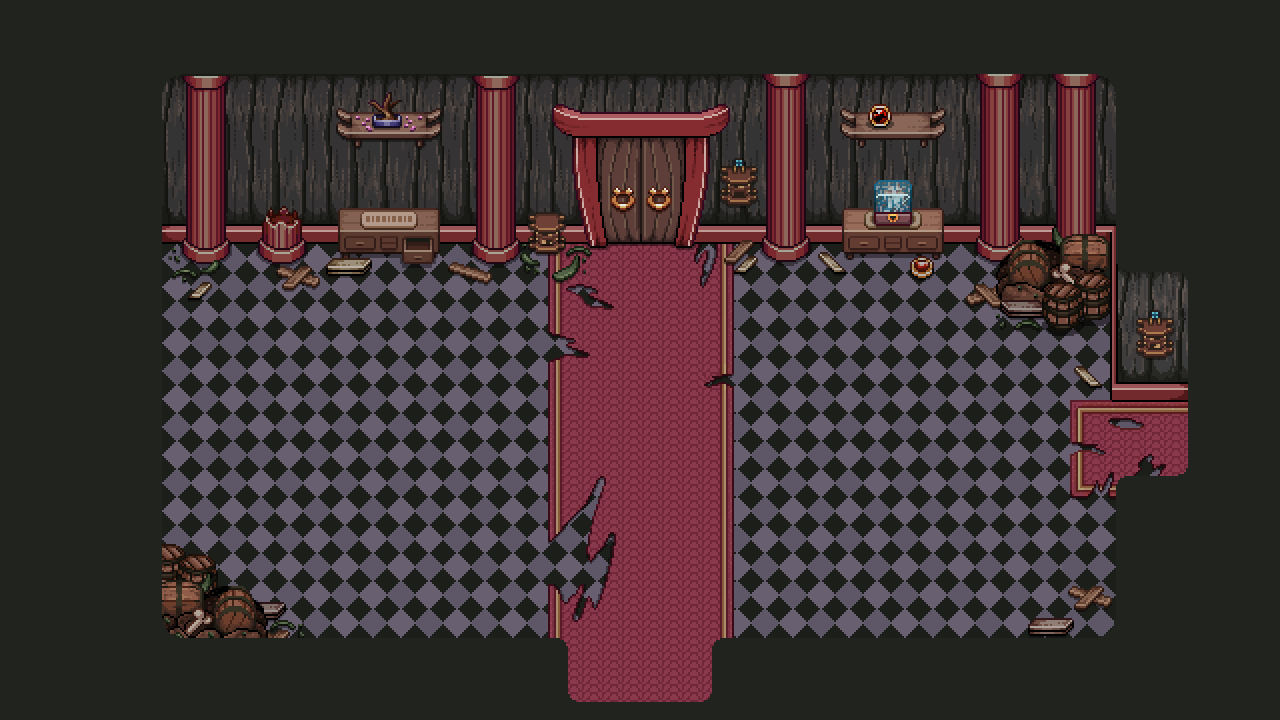 From the first to the last room: time to take a look at the Shrine’s exit/meeting room…

In this room, there will be a quite important flashback orb, showing you the priests trying to deal with certain horrible things that have happened in Tai Ming since your last time jump! 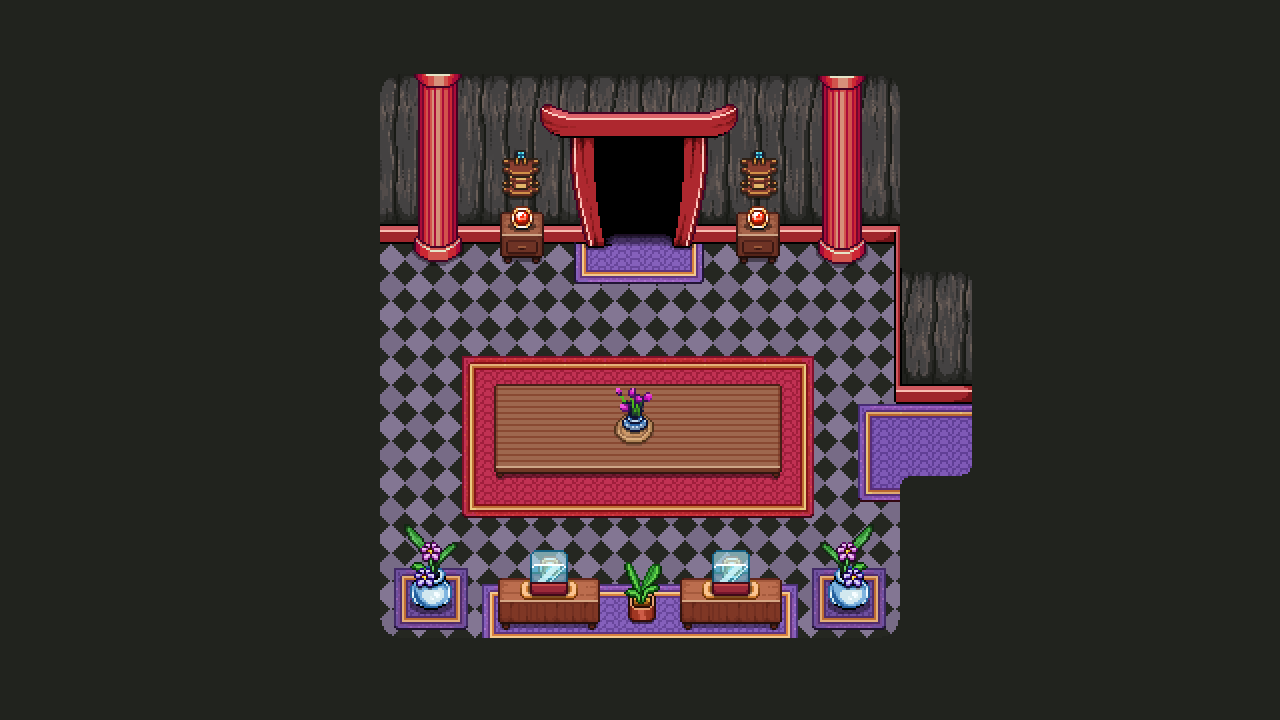 They will be in meeting by this long table, discussing… Things ;) There’s also a scheduled guest appearance of an Arcade Mode character! Can you guess who?

Now, we’ve also been making some slight changes and improvements that will be added to the second zone in a later update!

First up, the crown of Zhamla! In the first version, which we decided to change a little. It’s still the same crown, but he wears it differently, in a way we thought felt ‘cooler’, basically. The old version is on the left, the new is on the right:

We also made a chewing/munching portrait for the girl who eats noodles in the inn! Honestly I’m not sure this portrait will actually appear in the game (we kind of made it for fun), but we’ll see:

Next, we added some more decorations around the entrance to Puzzle World, indicating that something is being built here. It still looked a little bare with just the sign:

Finally, just some slight extra decoration of the first Puzzle World room, in the shape of a half-installed button and a hammer:

And that’s because we haven’t ordered them yet! So, the other day we decided to make a big list of all the sound effects we could possibly want, by playing the areas and writing down any sound effects that seemed to be missing.

After that, we went through the list and decided whether:

To make the list easier to read, we color coded the sound effects, as you can see here: 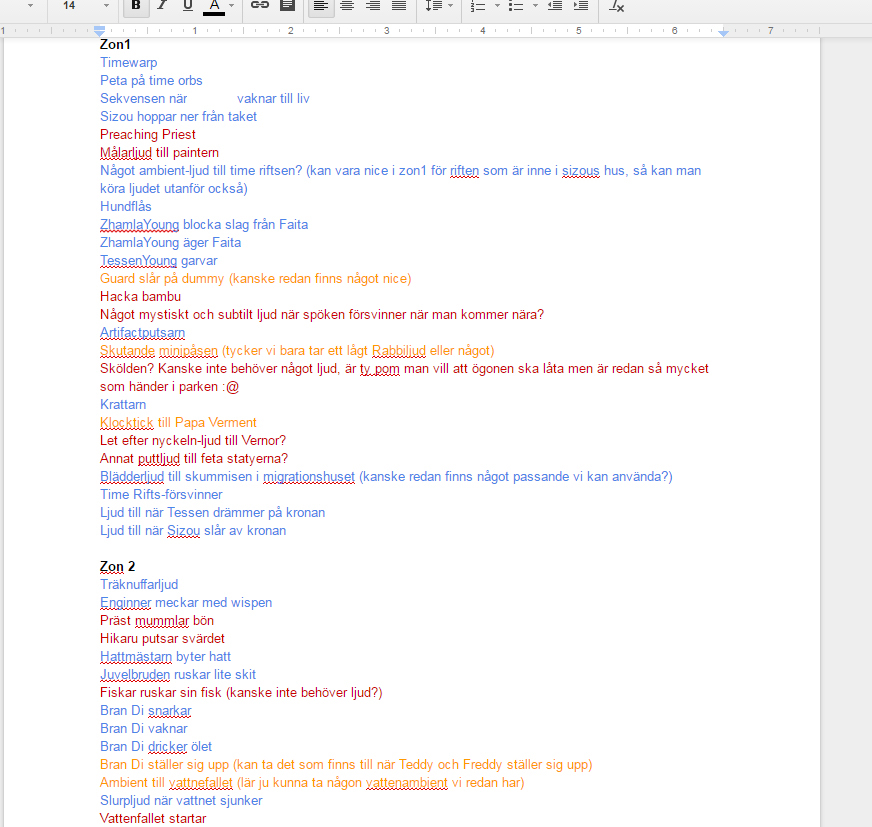 While we want to have a lot of sound effects in the game to make everything feel alive, sometimes it can get a little too much. Such as in the inn, where we at first had a ‘eating noodles’-sound, a ‘drinking’-sound, some ambience, and a ‘sighing’-sound (for Faita). Playing all of those would likely make the inn a bit too noisy, so we decided against requesting all of them.

As we continue working on the third part of Tai Ming we definitely look forward to adding these sound effects! It’s gonna make a huge difference to actually hear things as they happen, and we’re very happy to work with amazing people who help us bring the world of Grindea to life through sound effects and music! A very important aspect of gamedev that should not be forgotten :)


Eyyy, a bunch of really cool things to read up on :D
It’s really nice to see some focus on sound effects, as I feel it really makes a game when sounds are very satisfying. The small things can make or break a game ^-^