Hello guys!! This weekly recap will be a little different, to say the least! I (Vilya) had to go home to my hometown for a funeral last week, so I haven’t prepared anything to show on the blog. But rest easy, things have kept moving on in the Pixel Ferrets office anyway!

While Fred continues to prepare a ton of cutscene animations for the third zone, Teddy has set his sight on fixing and adding a bunch of things we’ve wanted to include in the game for quite a long time!

First up, and perhaps most importantly – new damage numbers! We’ve totally revamped the way these work. Take a look below for the old version:

So a bunch of things have happened here! First up, there will be tiny numbers showing how much damage you make with each hit, and a big number showing how much damage you’ve done in total within a limited amount of time! So long as you continuously damage an enemy this number will continue to increase. When you crit, the damage text flashes and there are pretty stars flying about! We also have plans to have the damage number increase in size the longer/bigger your combo is, and add some smaller stars to the crit-effect as well. But all in good time…

Another thing you might notice in the above GIF is – yes – Health bars above the enemies! Wohoo! I’m personally very happy about this update, as it makes hitting enemies much more satisfying when you can see their hp dwindle. True, you could do so before by checking the lower right corner, but it’s just not as effective (at least, I kept taking damage while doing that) or as satisfying. The health bar will appear once you hit an enemy and disappears after a while after you quit dealing damage to it.

And YES, this means health bars in Multiplayer will be a thing! You’ll be able to see the health bar of your friends when they go under a certain amount of HP, so now you’ll know who really deserved that health orb, and who was the petty thief!

Teddy also added The Western Ruins to the game, so there’s one more “Sorry this area ain’t implemented yet” notice gone. You can’t actually do anything here yet, except look at the scenery and battle a few slimes, but hey! At least it’s not an annoying invisible wall: 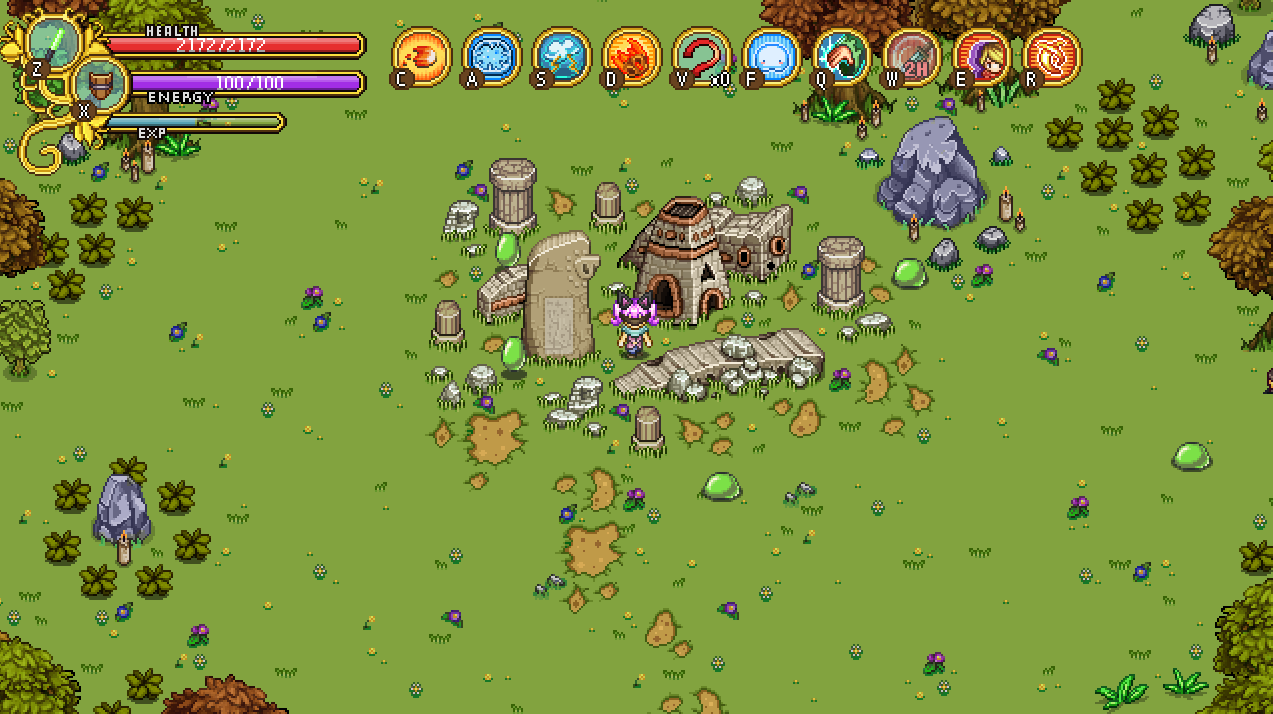 Also, we’ve finally added the Buy Back feature, which we’ve talked about for a loooong time. Shady Merchant is now officially your go-to guy for buying back anything you’ve sold in the game, and the Accessory Shop has moved into a building of its own: 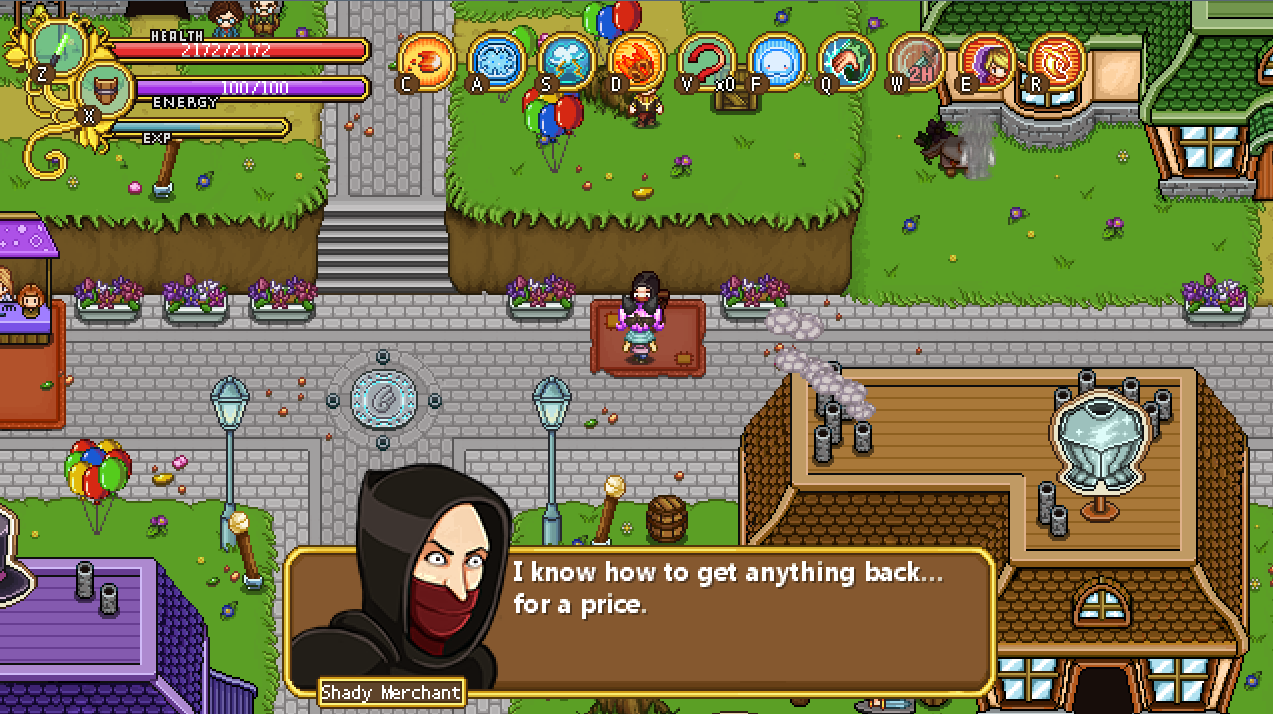 Ok, ok. One more thing. In order to make it clearer when a quest has been updated, we’re adding this new feature:

This is still an early work in progress, but the idea is that whenever a quest gets updated in some way, you’ll get a notice saying ‘Update’ above your head, after which the corresponding quest window will flash in the upper right corner. If you’re currently tracking another quest, it’ll fade back to that one after some time, and if you don’t track any quest at all it’ll simply fade away. This is all to make it a bit easier knowing when you’ve done something that change the objectives of a quest, or if you’re tracking another quest and ‘accidentally’ make progress in another, so you know what’s going on.

We also plan on doing a ton of improvements on the in-game map before Fred is fully done with all the animations needed to implement the scenes in Tai Ming’s third zone! There will be a ton of helpful trackers there, showing you exactly how much you’ve got left to do before achieving 100% on each area. But that’s for another post!

Before saying bye-bye today, here’s one of the few non-spoiler animations Fred is able to show you guys. Behold, a bunch of praying priests:


Looks great and i can’t wait until there’s been a few more big content updates for the game so I can fire it up again. Me and my roommate played it through recently. It was her first time trying the game and she said it was her perfect game. :)

But why did you rewamp the damage numbers? Did people ask for this or was it just something you wanted to do? I really dislike accumulating style damage numbers in general. The only thing I want damage numbers for is for comparing my old weapon/skill with my new weapon/skill or a crit with a non crit and if everything is accumulated that just makes this much harder to do. Seeing my damage over an arbitrary time span has always felt pointless to me, it’s not like it’s my damage per second or anything I can use to compare myself with other players or one weapon/skill to another weapon/skill.

Isn’t your old version of the damage numbers much more common and more familiar to players?

I would at least like the ability to toggle damage numbers on/off. I can’t remember if that’s in the game already or not.


@Øyvind: Thanks for the feedback! :D

It has been mentioned to us a bunch of times by users of certain builds (shadowclone and flamethrower in particular) that combat using these skills becomes difficult because the damage numbers obstruct everything around the player. So, we actually revamped the damage numbers precisely to increase readability (and we’ll revamp them slightly more to make it even better – the small numbers obstruct a bit too much still)!

Another thing we didn’t like about the old damage numbers was interestingly the thing you mention: many skills were extremely difficult to gauge the power of, because they just amounted to a sea of numbers. Judging how much damage a full channel of flamethrower does is nearly impossible, while judging the damage from a meteor is simple.

In case it’s not apparent in the gif, the combo duration is pretty short, so in all cases you describe this system is immensely more clear than the old one, except maybe for basic attack critical strike damage (but judging the average damage increase from your critical strike build would be easier in the new system).

However, I can absolutely understand someone who enjoyed the chaos and messiness of the old system. In my ideal world we’ll have settings that entirely removes damage numbers, and possibly even bring back the old ones for people who prefer that sort of aesthetic. For the default setting, though, a revamp was necessary for some builds to be playable at high level.


I approve of the new Damage Numbers 1000%! I’ve often had to guess when to perfect guard attacks while speedrunning so this will be extremely clear when the enemy’s animation is switching up. I’ll be lost less in the cloud of numbers. :D


This is looking good! But as a pixel artist myself I have to criticize the visual priority, especially in such a busy scene as the first screenshot.
Everything is extremely sharp and when you apply sharpness to everything, it all stands out and your eye isn’t drawn to a specific spot, there’s no where for your eyes to rest.

In practice though, because of animations and also shadows the enemies and such, they do stand out.
But I think you could level up your art style by being more selective with level of detail. Add sharpness to selective places where you want the player to look, not as a habit and I say this from experience, as I had the same habit of adding the same contrast and sharpness to everything.


Very nice update. Lots of new gameplay stuff which is a welcome addition.

And as a gamer (well, and programmer, but that’s not relevant, and not an artist, I’ve got to disagree with Victor. I like the art just fine as it is and it’s one of the reasons I’ve been following this game for so long.


Is there any plans to implement clothes styles yet? Would be nice to fully customize our characters, anyone loves cosmetics items I guess.
Also, do you guys got plans to do endgame content after the history ends or it just doesn’t gonna happen? With like some more side quests and pretty difficult bosses.
Would like to know about that.
Great game!


@Souchy: Fred actually wrote a forum post on why visible armor/different clothing styles is so difficult in our game. Here it is!

As for end-game content, the answer is yes but the execution is unclear as of now. We do want endgame content, and we have at least one boss in mind that can only be encountered after beating the game, but beyond that I can’t say anything definite. Specifically, we want the end of the game not to be a definite end of playing, but whether that is by patching in some bonus bosses or putting more resources into an interesting New Game+ implementation is something we’ll have to see!

I already thought somehow it was quite hard to manage new armors/clothes in this game since every action/skill have at least a small animation within the clothes as well, just wanted to know if that was really like I was thinking about it and if it ever would come as a reality, he pretty much explained it all, thank you.

About the endgame content, it’s already good to know you guys got something in mind. Make sure to keep us updated about that when the time comes, would like to help with some feedback/ideas/testing.

Keep up the good work, cheers!