Another week has passed, which has been another week filled with preparing for the final Tai Ming boss. Finally, we’ve completed the third and last stage of the Mimic boss room… Time to bring in some Mt. Bloom!

So basically in this third stage you’re back to your own time, but we wanted this room to be more ruined than the rest in order for some health crystals to have grown in the room after this time jump! The boss battle is very long, after all, and being so close to Mount Bloom we thought this was a nice solution for including some health without forcing random health orbs.

The health crystals aren’t pictured in the finished version below, but they’ll be growing in the parts where the cave floor is peeking through: 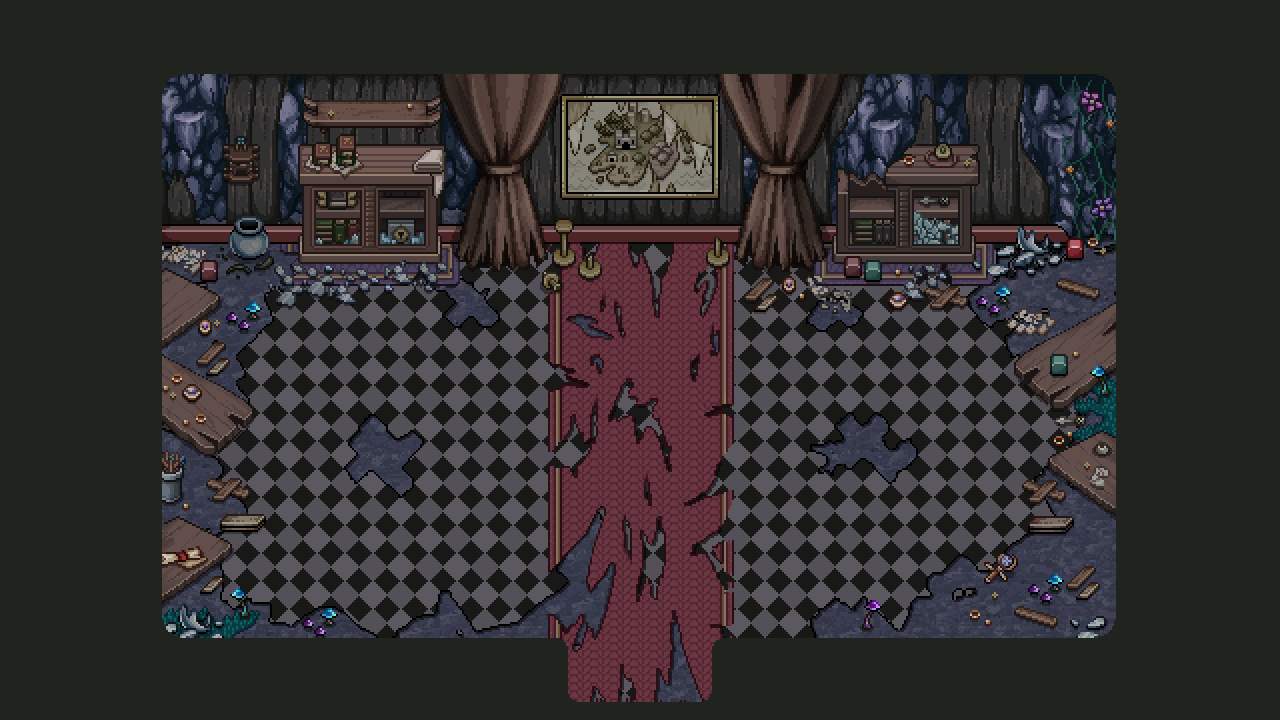 Another thing we’ve been focusing on lately is the cutscenes surrounding the Mimic fight. And with this one, we have a question for you guys!

Above you can see one of the cutscenes we’ve been prototyping lately. Now the question is: when should the boss portrait appear? We have two suggestions:

In this first alternative, the boss portrait (yes it’s a thorn-worm for now, since the real one hasn’t been made yet) appears as the Mimic sucks the crown into its chest.

…And in this one it appears as its tongue is around the crown, pausing mid-animation.

What do you guys think? We’re currently torn, and while it might not seem like a huge decision, it’s always better to pick the version that the most people like better! When I asked this in my own work blog, the overwhelming result so far indicates the second one is better. Do you agree? Please comment with your preference! :D

Now, we can’t let the Mimic boss portrait remain a thorn-worm now, can we? Time to fix that!

We are actually not yet sure if this will be *the* boss portrait, or if we’ll have several, one for each state. So before making this one, I made some quick sketches to work out what size each of the iterations would have in their portrait versions, should we decide to add the other ones: 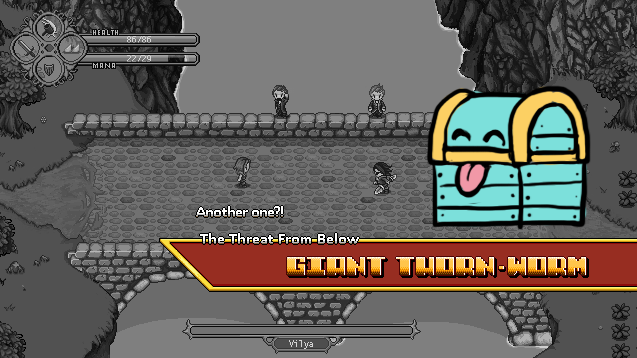 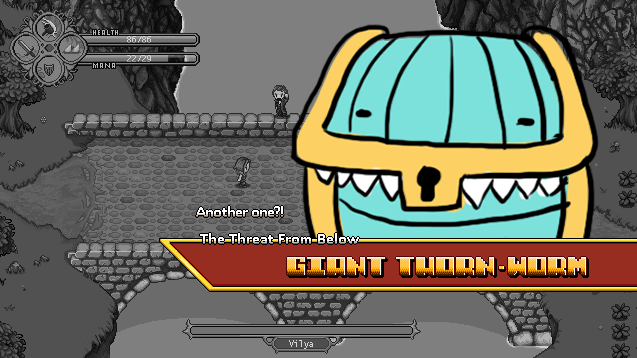 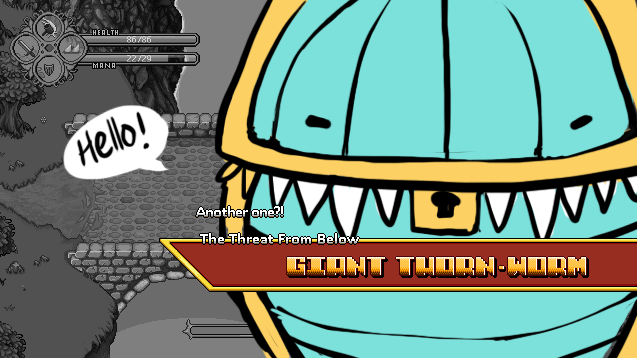 For now though, we are gonna start with just the small one, and play around with adding the other two in a prototype, to get a sense of what it’d feel like to have them appear after you complete each iteration: 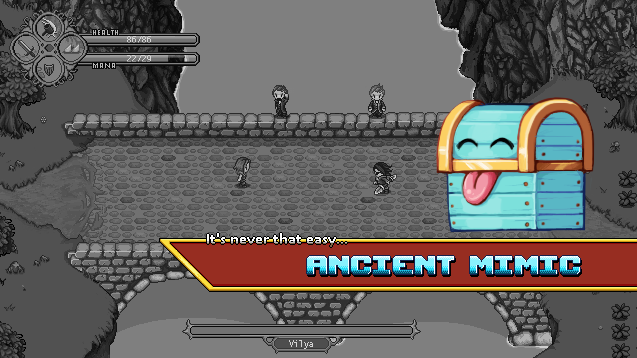 What do you think? Would you like to have a new boss portrait appear every time you beat one version of the Mimic, or do you feel it would get too spammy, throwing you out of the mood of the battle? I guess it’s hard to imagine without actually trying out the fight, though.. Maybe we should include a way to try out the different versions in next frontline update, unless it would mean too much work for our poor overworked programmer!

And now, some mixed stuff!

First up, fixing a graphical error shown above! Behind the door transparency the closed door peeked through, rather than the floor. It has now been fixed.

I also added a bunch of extra decorations for the second fighting room in zone 3. It just looked a bit empty, so I felt it needed a bit more polish:

I also adjusted the garland you’ll unlock in the Seasonne batch of housing items, making sure it’s properly stackable. Previously, you had to put them next to each other like in the left version below, but by editing the size they will now stack seamlessly when you put two next to eachother:

Finally, we’re swapping out the map painting in the Mimic boss room for a portrait of Grindea! Progress and finished versions below:

Now, a lot of you have asked when frontline will be updated with the third Tai Ming area. Here’s our estimate: HOPEFULLY this weekend! We’ll do our very best to make that happen, at least :)


The Second Mimic introduction highlights the moment of theft with the pause, enhancing that event and preparing the player for the fight to come. The first introduction is less powerful.

For the introduction image, a small innocent looking mimic belies the fact that it grows into a monster, which makes that realization more impactful for first time players. It also makes the theft seem playful rather than protective or ominous.

Pausing in the middle of a boss battle is always annoying -it disrupts your feeling of the “action”. Plus if you replay the fight multiple times it becomes frustrating. Instead you could show the larger portraits on screen without a pause, as long as they don’t cover too much of the screen (or last a long time).

Another thing to consider is that when you replay the fight, as in the boss battle hall, there could be a conglomerate portrait, showing all three sizes at the beginning, since the player will know that the mimic grows.


If you wanted to show a portrait for each form, one way to handle it would be to show the portrait during a growth animation. The player can reposition while watching the growth which keeps the action going while instilling a feeling of dread.


The multiple portrait idea is really fun but if it stops gameplay then it could be kind of an annoyance for those who play the game multiple times.

Having said that… fun, quirky things like this are what make games last through the years. Ninjarock’s idea is interesting. Having the animation play while still being able to move could work. Maybe… ;)


I agree with not having the action stop for the sake of the portraits. If the fight would not happen all at once, like, if we were to find the boss multiple times, now that would be perfect (like, you fight it once, it somehow escapes and consumes more treasures, making it bigger or it looks defeat and a normal sized chest but as we leave the room we get a scene where the chest hops away, out of the screen, only to be found elsewhere, bigger and meaner).
If it’s going to be a one-spot fight then maybe just use the smaller portrait but when the image is about to disappear it changes into the bigger one and peeps will think “What the heck??”. Think it’s a bug until the boss really grows into what we saw for only a brief moment :D


My vote for when to show the initial portrait is when the tongue is still out. For the second one, it just freezes when it looks like a chest. So I think having the tongue out when the portrait flies out gives a better sense that it’s a creature for that moment.

For the other portraits questions..no idea.. I’d just have to see it in action


I want three portraits. A 1-2 second pause between transitions isn’t going to be the end of the world. Players aren’t even going to notice it unless they die 50 times.

In which case maybe only show them once per session.


Seconding everything Ninjarock posted.
Pausing while the tongue is out gives you a moment to realize what’s going on, while the whole action looks a little too fast if you paused after it’s eaten the artifact.

I think showing a new portrait each stage might be fine the first time through a fight, but assuming people are going to fight it several times, which might take several attempts each fight, it’d become annoying over time – like a cutscene you can’t skip you’ve seen a thousand times over.


I think one portrait should be enough


I like the pause with the tongue out a lot, though i’m not able to adequately describe why.

as for the image thing, I like the idea of showing all three images, since i feel it can add more than it can take away. while some complain that it can interupt the flow of the game, i think it adds to the theme the game has going for it. Though I do feel that it could be interesting if the name plate changed for each new form (perhaps somethign like going from ancient mimic to true ancient mimic [unsure about second form, that one is just a random suggestion] and maybe finishing with the introduction of the third form being a more humorous title, such as “wait, what?” or “you done screwed up now”)