So, Tai Ming has been fully added to frontline: what happens next? Once we’ve polished up Tai Ming for a stable release, there are a ton of things we want to add before moving on to the next area, and many of these will probably get their own Frontline and Stable releases:

1. Housing
We’ve talked about it a lot, and it’s finally on its way! Almost all basic batches are completed, although we’ll keep adding items as we come up with them. All that remains is polishing up the interface and for Teddy to implement like a hundred items…

2. Support Skills
Seeing as there’s only one area and two dungeons left of the game, it’s high time these got implemented. We still haven’t decided 100% which ones they’ll be, but we have a lot of nice ideas that we hope will make things interesting for support players as well. More on this later~

3. The Potion Rework
I mentioned it before, and we definitely want to implement this ASAP as well! Makes potions more interesting.

4. Rebalance
A rebalance of pretty much everything, including giving magic users a tiny bit of range for their normal attacks.

5. Arcade Mode Rework + New Floors
As we’ve talked about before on the blogs! This will likely happen after the above things, since the support skills, rebalance and potion rework will affect things in Arcade Mode, and a complete rework will probably increase the amount of players trying it out (which means it’s nice to already have those in the game at that point)

6. Quest Skipping After Multiplayer Completion
This has been on our feature list forever. Basically after you complete quests and stuff in a multiplayer session you’re supposed to get an option for skipping them when you go back to playing single player.

7. Season Orbs and ..Plant Nutrition..?
A lot of you have noticed tiny wiggly plants and areas where it looks like you should be able to cross the water somehow. Since these things have trolled you long enough, we feel it’s time to actually implement their ‘solutions’, namely Season Orbs for crossing water and ….some kind of plant nutrition to make the plants grow.

We’ve had various ideas about the nutrition either being available throughout the world or sold by Oak in the farm in Evergrind West. Still haven’t finalized that part but it’s likely we’ll finally implement it before the desert!

8. A Special Side Quest & Treasure Maps
More treasure maps because a bunch of them are already prepared, and the special side quest because the reward we have planned for it is something that might be interesting to use for players while they await the next patch.

And then, it’s on to the desert! This will probably take a while to complete, but once it’s all implemented there isn’t a lot to add aside from more side activities (quests, arena challenges, boss rebattling, etc) which we’ll likely save for after the main story is done. How exciting to take another step closer to that point!

And to jumpstart all of that, let’s jump straight into the stable priority stuff! First up: shop upgrades for when you reach Tai Ming!

So yeah, we wanted to upgrade the shops with some new items once you reach the inner levels of Tai Ming, since most of the shop items have been around for a bit at that point. We decided to upgrade the three rings that are already in the game with a second tier, basically a stronger version of the previous one. We also wanted a new armor piece, and a bunch of new accessories:

We haven’t decided exactly what the accessories will do yet, just that we wanted a bunch of new ones. There are a ton of builds that need new items though (basically like all of them), so I’m sure we’ll come up with a number of alternatives before they get implemented~

There are still a lot of miniatures / drop sprite versions of a bunch of items left to do as well, so here’s another video featuring the making of the Mount Bloom special items:

The first two mushrooms didn’t get recorded because I forgot to turn off Aero, so OBS recorded me painting on top of a grey screen instead, haha! Oh well :D

Finished sprites (in 300%, in case you’re wondering why they look bigger than the ones above):

Since I’m waiting for Fred to complete the additional NPCs that will appear in Tai Ming’s first zone, here’s a preview of a couple more Mount Bloom room types for Arcade Mode!

Making these rooms are a little bit of a challenge: they can’t be too small with the Larvacid and Spinsects enemies ruling this section of the game, but with too large rooms there also won’t be much of a challenge!

Hopefully these slightly smaller rooms (compared to the last batch) are balanced enough to make it a fun challenge! 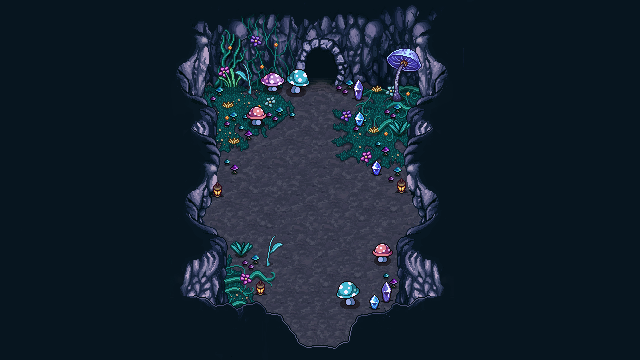 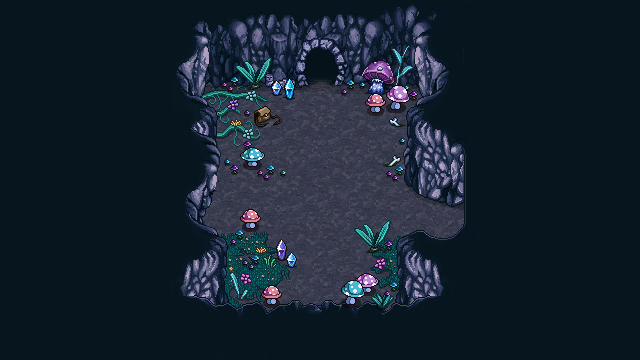 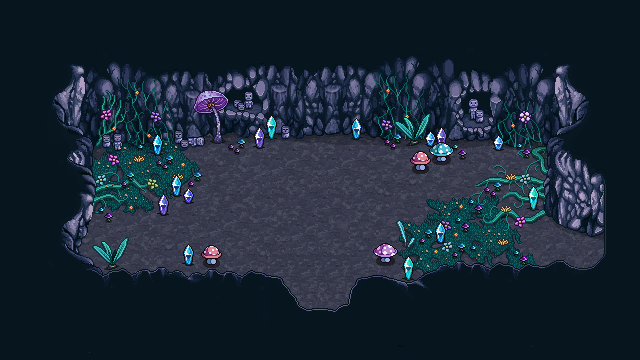 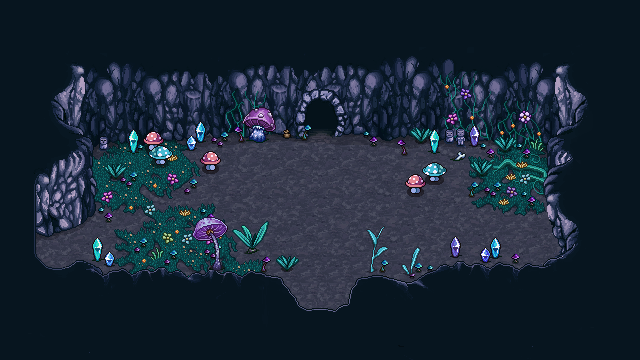 I think I’ll make one more room type that is slightly more rounded, and then a few variations of some of the room with water decorations as seen in some of Mount Blooms early maps. After that we’ll hopefully have enough variations, given the many different decoration combos that can appear in each room! 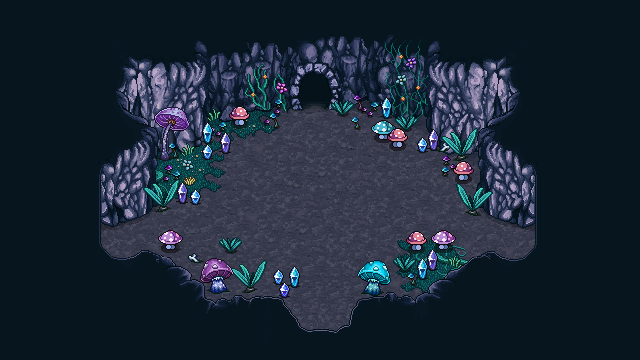 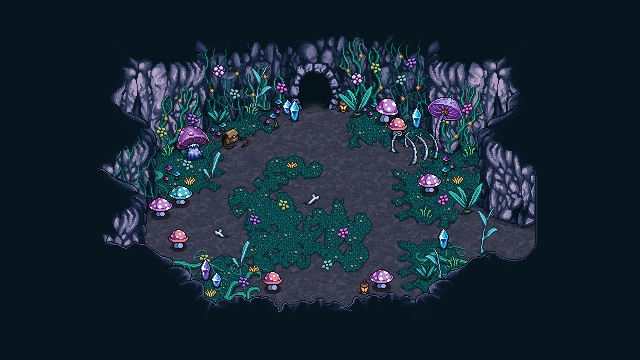 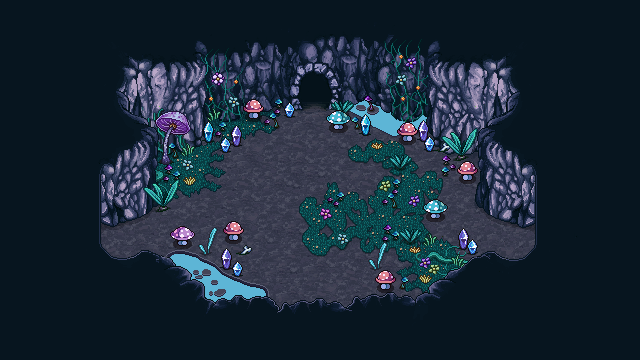 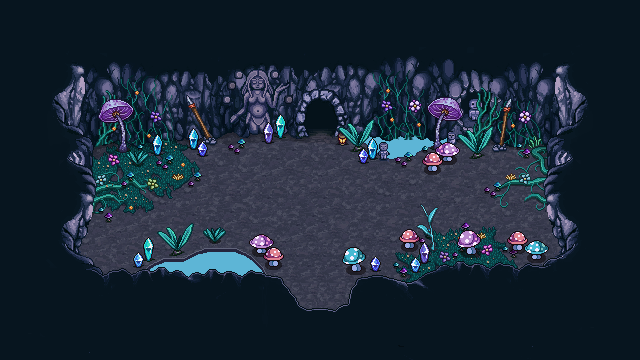 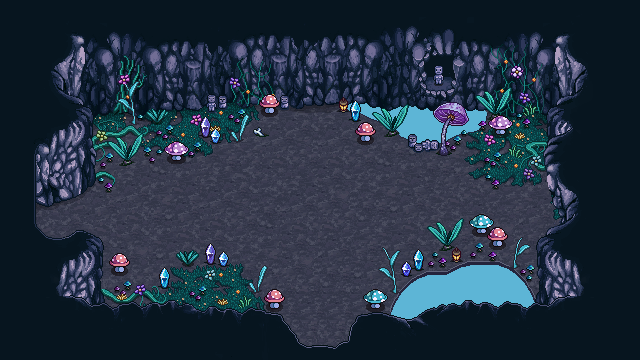 I keep worrying the difference between each of the rooms won’t be enough, but considering there isn’t much difference between most rooms throughout the other Arcade Mode floors it should probably be fine (especially with our new and improved mix-and-match system that mixes and matches various decoration setups for each of the corners).

Mostly I suppose people are too busy worrying about not dying to consider how closely two rooms resemble each other… :)

Next week we’ll continue to flesh out Tai Ming for a stable release, and the work on Arcade Mode and its rework continues~