With the Arcade Mode rework drawing closer, we sat down to iron out more of the houses that will be available so I can begin work on the new Arcadia design. We also changed a few things around:

Candy and Muffin were said to have a house in the last Arcade Mode meeting. That has been changed into two vendor stands near the exit to the Arcade Mode run, in order to avoid having to load into a house every time you want to try out new treats or curses.

The Alchemist Remedi will also appear somewhere close to the exit, and like candy and Muffin he will be available without moving into a building, although the exact design of his spot hasn’t been fully decided yet. Remedi will allow you to select one (or multiple, not decided yet) potion(s) to bring with you on your arcade run, and it will work much like the potions in story mode after the rework has been implemented: battling enemies will slowly refill your bottle.

The Bank is something that isn’t available in story mode, so it’s an all-new thing. At the bank you’ll be able to trade in your essence for money, or money for essence!

Master Ji’s Dojo will make an appearance as well, and at this place you’ll be able to train your perfect guard by selecting enemies that will spawn in his training ground. We have plans on having perfect guard challenges here as well, where you have to complete a series of challenges using only your perfect guard and your reward will be headbands in different colors signifying which rank(s) you have passed. This feature might make an appearance in story mode as well!

The Cinema is another feature not available in story mode, and we’re not 100% it will make it to the game yet, although it would be pretty cool. Teddy has been working on a feature that allows you to save replays of your arcade runs, and our idea is that you will be able to load and watch your own and others replay in this building!

The Carpenter will have a shop that sells housing items! Each batch will be unlocked by reaching the corresponding floor in an Arcade Mode run.

Farmer Oak will appear with a petting zoo! He’ll have a set of quests and taming items that will bring animals to Arcadia. Our idea is that it’ll be optional whether the animals are gathered at the petting zoo or if you allow them to roam free in town.

There will also be a Clock Tower where you can change the time of day: initially between day and night but we might add support for dawn and evening as well.

Other than that we have a bunch of decorative slots planned that will help bring in new inhabitants and quests. Some of those ideas include a garden and a fae tree (but plenty of smaller ones as well). We also came up with a couple of quests, but I think we’d rather have you explore those on your own once they’re in the game, rather than have me tell you now what they will be all about!

Next up is some more housing miniatures! Since the Tai Ming-themed ones are sooo many, I’m going to divide them into groups depending on which item type they are. Some batches will be bigger, other smaller. This is one of the smaller batches, featuring the ‘small items’, or things you can stick on tables and other surfaces! 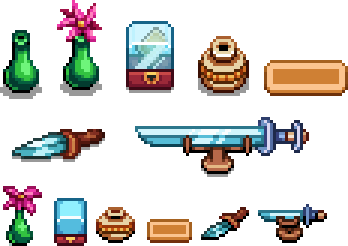 And now, some more design talk! As you might know by now, the next dungeon is going to be a ghost ship. What you might not know, though, is that the ghost ship will be populated with the possessed spirits of sailors from the Merchant Isles.

Since we want the enemies to have a cool design, we wanted the sailors from the Merchant Isles to have a particular look about them, so it’s easy to spot them. Our idea is that you’ll see some of these sailors throughout your travels, and be able to recognize the design when you meet the enemies in the ghost ship.

Fred had a design in mind, so he went on the make a bunch of suggestions:

After seeing these designs, I made a quick sketch of a portrait version and wrote down a bunch of suggestions for common points among the sailors. The clothing style is basically a toned down version of the ones seen on characters from Merchant Isles that are already in the game: kind of 1700’s pirate/seafarer inspired clothing, only with the sailors it’s in earthy tones rather than the bright noble tones of the merchants we’ve already met. 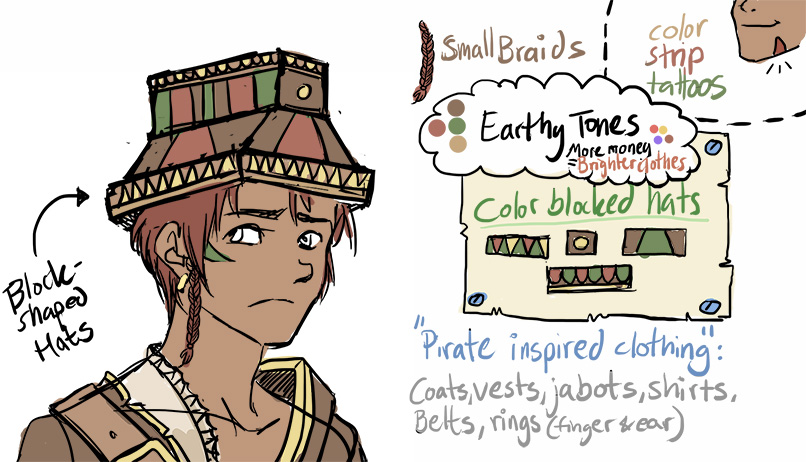 In the beginning, our first thought was that each sailor would have a different version of the hats Fred designed, and that the hats would be common among all the people from Merchant Isles, regardless of their occupation. In the end though, we decided against this, and selected a single hat type for all the sailors, as seen below. 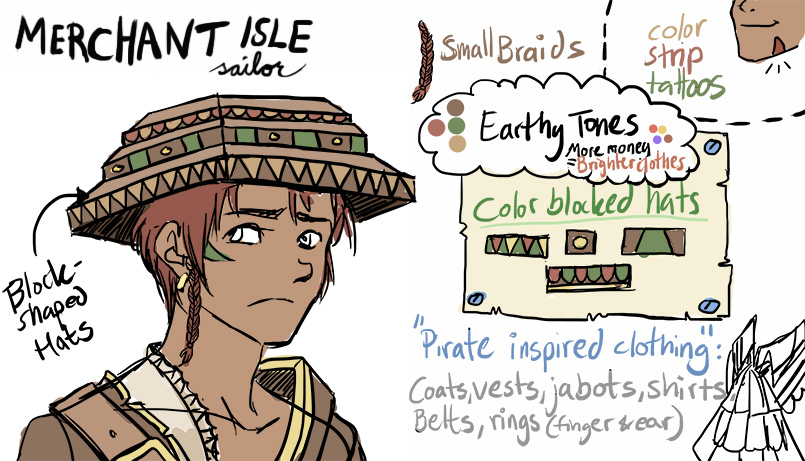 After deciding this, Fred made a bunch of different version of the new hat, as well as a couple edits of the characters clothing, to better fit with the clothing designs of my portrait. In the end, our favorite is the fourth hat from the left, which is likely to be the one we’ll use for all of the sailors.

There will still be some clothing adjustments before we’re completely satisfied, but this is an example of how me and Fred sometimes work back-and-forth in creating designs, with all three of us coming with feedback and ideas along the way. Next up I’ll actually be making the proper portrait of this guy, who will be one of the additional NPCs added to Tai Ming’s first zone before the Stable Patch :)

This week got cut a little bit short due to Fred’s birthday and us taking a couple days off for easter to spend with friends and family. Next week, there will be another design talk featuring what the desert enemies will look like, and we get to see the finished Merchant Isles portraits (among other things). Stay tuned~