This week was a little different, as it was very special week indeed! In fact, last week (Tuesday to be precise) Teddy turned 30! To celebrate this, we left our isolated island for the Swedish mainland to celebrate him with his family. We were gone from Thursday last week and only got back a short while ago, so this weekly recap will be a bit shorter than usual!

To make up for that, we’ll be taking a look at what Fred has been busy with recently! We haven’t posted a lot of his animations on the main blog for a while, so there’s a bunch of stuff that’s been going on behind the scenes.

First of all, the desert enemy designs! We already talked about their gameplay design earlier, but since then Fred has been busy iterating their visual appearances: 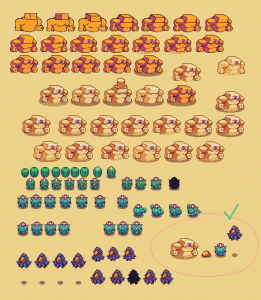 This is typically what it looks like when we try to figure out what something should look like in the game. Make a bunch of variations and then pick whichever one is the best. In this case, we stuck with the ones in the red circle, bottom right. We’re all very excited to finally start working on the next area, although me and Teddy have a ton of housing and arcade mode stuff to finish first!

Speaking of housing, that’s another thing we’ve continued working on. Below you can see a basic test of a different light setting and a bunch of iterations for the visual appearance of the hand icon which allows you to select and edit furniture:

Our current favorite is the version that points straight down, with the selected square beneath it. We’ve also started working on our options regarding multiple room layouts and it’s coming along, though it’s gonna need a lot of testing since there’s a bunch of design problems occurring from having several rooms that need to be solved and reiterated.

Meanwhile, Fred has been making animations for a ton of the housing items that will move in various ways:

And now, another of those desert town portraits! As I mentioned before, gotta start early and all, right?

Though the stories of the characters I design now aren’t fully established, the basic idea of this one is that she’s a merchant from Merchant Isles, come to trade in the harbor town.

In the future, I imagine I’ll make more merchants and sailors from there, as well as people from many other places. Our idea is that the desert town is a point of trade that attracts lots of people from all across the world, so there might even be one of two fae visiting, or perhaps a caveling? I guess we’ll see what the future holds for this town!

NOW; those of you not wanting to know what things will unlock where in the new version of Arcadia should probably steer clear of the rest of the post!

After confirming a bunch of things on another meeting, discussing which Arcadia houses should be approximately how far from the entrance/exit to your arcade runs, I went ahead and started designing the layout and basic looks of each of the houses you’ll be able to unlock in Arcadia!

For those of you who don’t want to know exactly what will get unlocked and where, I wouldn’t look too closely at this picture: 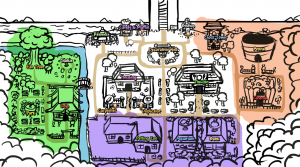 The color overlays show three different areas, each of which you will have to pay gold to unlock, while the white area will be available from start (though the Candy & Muffin stands will be the only ones built when you first start – the rest you’ll have to build with gold and time).

We ran around this background in-game with our characters and feel satisfied with the overall feel, though some sizes and distances will end up slightly different once the actual buildings and items have been made. For this area we’ll also be making new special trees and vegetation to further cement Arcadia as a place of its own, disconnected from the rest of Grindea (though connected in a mysterious way~).

I gotta say I’m really excited to start working on this and get the new improved Arcadia up and running, especially creating some of the more creative looking houses and make everything fit together :)