In case you missed it, the housing patch is now up and running, so if you haven’t tried that yet, go ahead and test it!

The initial feedback seems very positive, and I’m actually surprised to see how many of you seem to really enjoy building your houses! The interiors that have been posted all look great and so creative, I didn’t even know you could make such cool layouts with the things we made so far. Thank you for that all of you! We’re still going to introduce a ton of new pieces of furniture, of course, and we’ve already gotten a ton of cool ideas based on your suggestions! If you have any more ideas for housing and what to do with it, please go ahead and let us know by commenting or posting on our forums!

Now, we’ve decided that we do want to further improve the housing system – specifically the layout – and we’d rather do it now while it’s fresh in our minds rather than sometime in the future. Since we estimate the development time will be more or less the same between creating pre-designed layouts or having you guys make those layouts yourselves, we’ve also decided to go for the the later, allowing you more freedom in your house building endeavors.

This of course means a whole new set of design decision that needs to be ironed out before things can be implemented properly. For one, we need some kind of build tool where you can edit the walls, pull them down or up and change the size of each individual room. This will be a challenge in itself, but will have to wait until the system runs properly (Teddy has already started working on this).

Second, we had to discuss whether increasing your house size would be completely free or something you pay gold to do. The idea we came up with is that each tile/square in the house represents a number of “Lumber” (might change the name later). This means that as you expand your house you’ll use up lumber, but should you make it smaller again, you’ll regain them. You will be able to purchase the lumber at the carpenter store for gold, though we haven’t decided how expensive it will be yet.

As now, there will be a minimum number of tiles each room can be, but you’ll have a lot of options in terms of the shape, since you’ll be able to move each wall tile up or down. While this system will need a lot of fine tuning, I think it’ll be great in the end!

As for the general feedback we’ve received since the housing launch, two requests stood out above the rest: bookcases facing sideways and chairs facing upwards!

The reason we didn’t include sideways-facing bookcases was, honestly, because we thought it looked boring and we thought nobody would be interested in that anyway. After listening to your feedback, we know we were wrong, and agree that there’s definitely uses for them – and so they will be added in an upcoming patch!

Along with the bookcase update, there will also be chairs facing upwards, so you can put chairs in all directions. We always intended to include these, but for some reason, we kept forgetting to actually make them. Oops!

As per request, there will also be a style for the female statue without the moss, as pictured below: 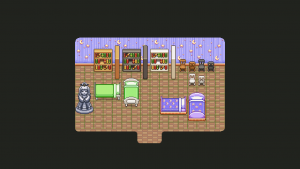 As you can see, there’s also a bunch of beds in that picture, and you might wonder why. Well, we’ve had a discussion about the perspective in the game and whether some items look better in their correct form or not.

You see, the vertical beds that are currently in the game are wrong according to the perspective – they are much smaller than they should be, compared to the horizontal version – and Teddy suggested we should correct it since it was something that bothered him as he was flipping between the two.

When I took the above screen, I had started fixing the vertical beds, but something felt kind of off. I asked Teddy to upload the Pumpkin Woods bed so we could test it and compare it to the old, smaller version.

Turns out we ended up preferring the smaller one, even though it’s technically wrong. For some reason, the beds end up feeling huge when they’re in their correct size, and it actually felt a lot worse than flipping between the original ones. I will still fix two that felt a little too small, but the rest will be kept the same, and the “fixed” versions will go to the trashcan! 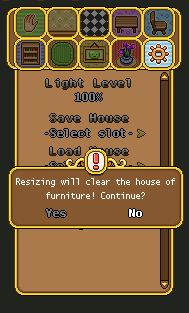 Another thing that will be added is the !-mark seen above. It will appear above important notices, and serves as a warning of sorts. Or just to make the boxes a little more interesting-looking, if you will!

We also decided to do a bunch of fixes to items that didn’t properly fit within their tiles/squares, making placing them in a house rather awkward. First up, the beer keg, which has been changed to a bigger version. In the original, left version, it was simply too small and left a lot of space on each side. Making it even smaller (to fit a single square) wasn’t an option, so instead we decided to make it a lot bigger. It now takes up 4 squares, and while there’s still some space remaining, there’s not nearly as much of it: 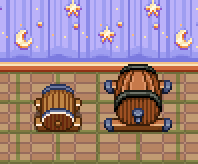 Next up, some of the Temple of Seasons bushes, which used to take up about 1.5 squares, also making them very annoying to place within your house. For these, we decided to make them smaller instead:

This flower crate also got a smaller version, which now fits a single square as well:

The Pumpkin Woods bench and chair, which weren’t pictured above:

We’ve also started working on a new object, which is a weapon stand where you can place your 1- or 2-handed weapons to show off within your house. In the top left corners of the below picture, you can see two of our iterations for the 1h version. In the end, it’ll be something closer to the right one, as it shows off the weapon better and feels more balanced:

In semi-related news, another thing that will be included in the next patch is the long-awaited feature of being able to skip quests you previously finished in a multiplayer session! Before this patch airs, you’ve had to redo every single quest in single player, regardless of how far you got with your friends (unless you were the one hosting). Now, you’ll get a notification about having completed any given quest in a previous multiplayer run, and the option to skip to the end of it: 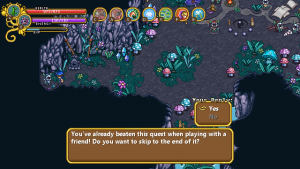 As for Fred, his focus has been more enemy animations, as well as laying the groundwork graphically for those weapon stands that will feature any weapon of your choosing as a housing item!

In order to make the weapon stands work, Fred selected a frame from one of the attack animations featuring each sword and edited it to fit the weapon stand sprite. He also had to add a hilt to each of the ones that needed one, since he never made on for the animations: the main character’s hand typically covers where it would have been. 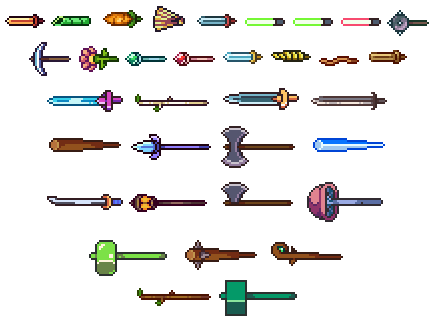 And as for the enemy animations, things are moving forward with the desert enemies and in particular with the Mrs Bird enemy:

Finally, there’s another portrait for the upcoming desert town! A winter fae, to boot – Talk about getting out of ones element!

This poor guy has been dragged along to the desert by a summer fae friend. How cruel! He doesn’t particularly seem to enjoy the heat, does he?


On the weapon stand thingy there is double axe that isn’t meant to be obtainable as it is Luke’s axe. Or you’re planning to implement it as player weapon?


@HellGoesOn: The double axe has been in the “potential future weapon”-pool for a long while! Fred made that and some others in a spree way back.

I actually haven’t considered how similar (or identical?) it is to Luke’s axe! Maybe we shouldn’t make it obtainable, then (except if we want to involve Luke somehow).


I looked really closely to Luke’s axe and found out that he has a bit diffrent axe head.
But they still are quite similar…
Well, if it will make its way into the game, I wil have more stuff to cosplay Luke ^_^