With Fred back in town we had a meeting, as mentioned last week, where we discussed two important things: the new housing patch feedback and something I know many have long awaited… the support skills!

When it comes to the housing build tools, there actually haven’t been much feedback to speak about, which we take as a good thing: hopefully that means they weren’t too confusing! There are still some things we’d like to polish, though – for instance, some kind of visual effect for the clear and delete functions (as the items/rooms disappear).

We also want you to be able to add more than one door to a room, and by doing so connecting it to others. To do this, we’ll add a ‘connect’ button in the menu, which allows you to add another doorway between two rooms that are next to each other but not yet connected.

What about the support skills, then? Well, we’ve come up with eight different skills, which will be introduced in more detail at a later date. For now, let’s talk about the changes compared to what the support trees look like now:

For one, the skill category will change name from “Support” to the more versatile “Utility”. Our reasoning is that with a name like support, many players who expect to play the classical support role will automatically hone in on the support tree without checking the other trees first. However, while these new utility skills will likely make playing a support-like character more fun (compared to the current skills), we want to make a point of the fact that you can pick and choose from any of the skill categories, and use the Utility ones as bonus abilities, rather than either ignoring the tree or focusing too much on it due to the support name.

Finally, the utility skills won’t use the charge system, and won’t use up gold points. The way we’ve designed them now, they will cap at 5 skill points and only use silver – but this might change as we begin to prototype them and play around with them within the game.

Since the support skills are mainly Teddy and Fred’s area, I’ve focused on other things this week!

First up, I’m continuing work on Tai Ming’s arcade mode stuff, and it begins with changing the initial size of the rooms: 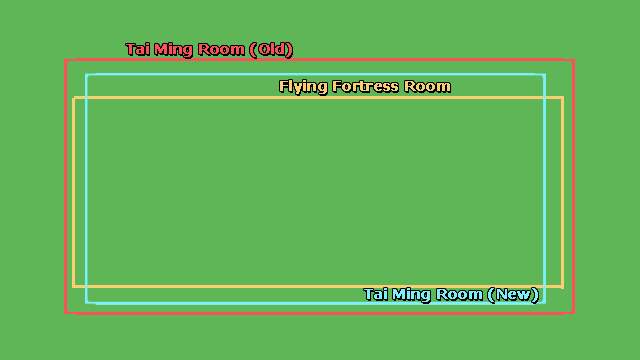 As you can see in the above image, our first version was pretty huge, larger than the biggest room in Flying Fortress (which I believe is the biggest room in all of Arcade Mode to this point). It still is very big, even after we changed the size a little, but less extreme.

So anyway, first thing I had to do was change the size of each of the walls I made currently, and then I went on to add openings/exits for each of them, as seen below: 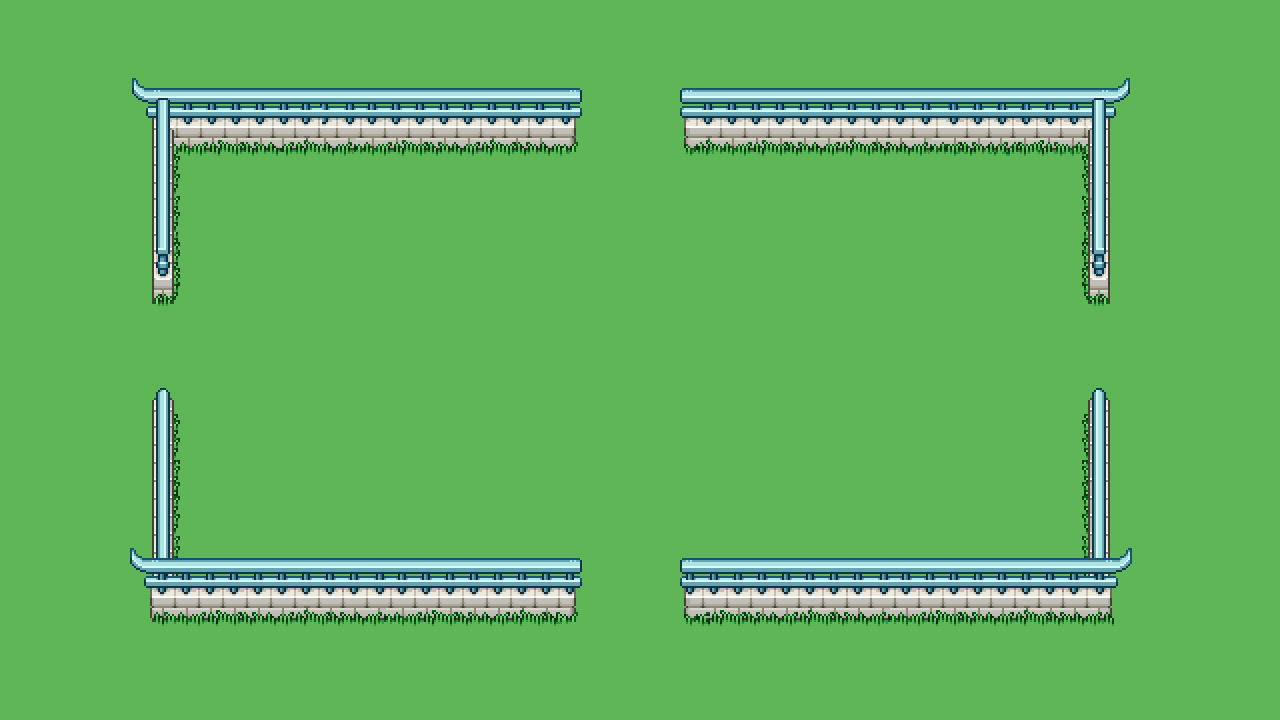 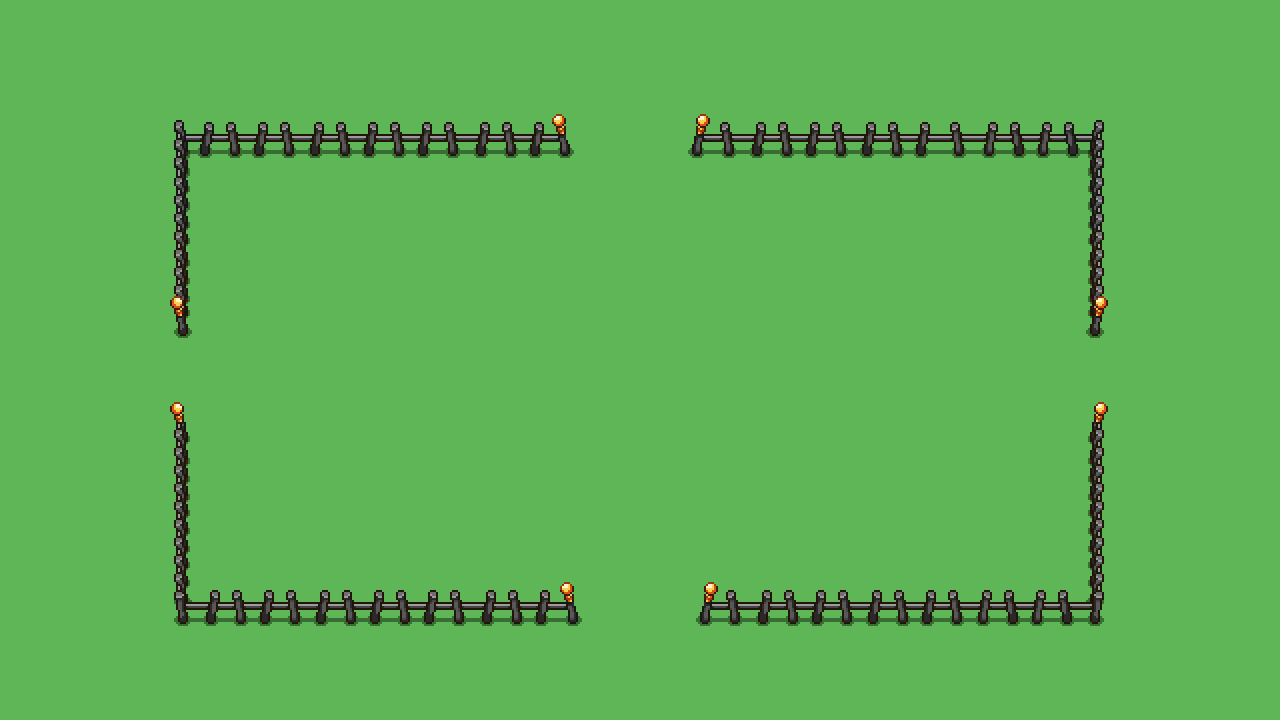 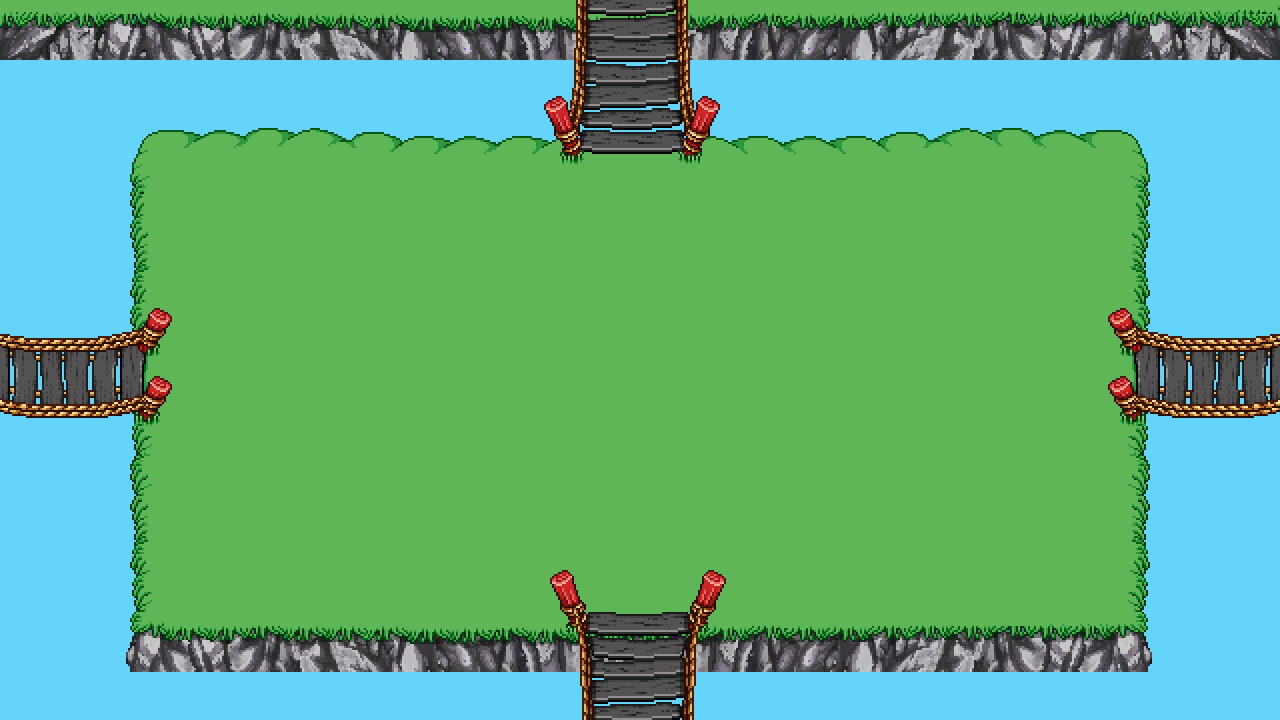 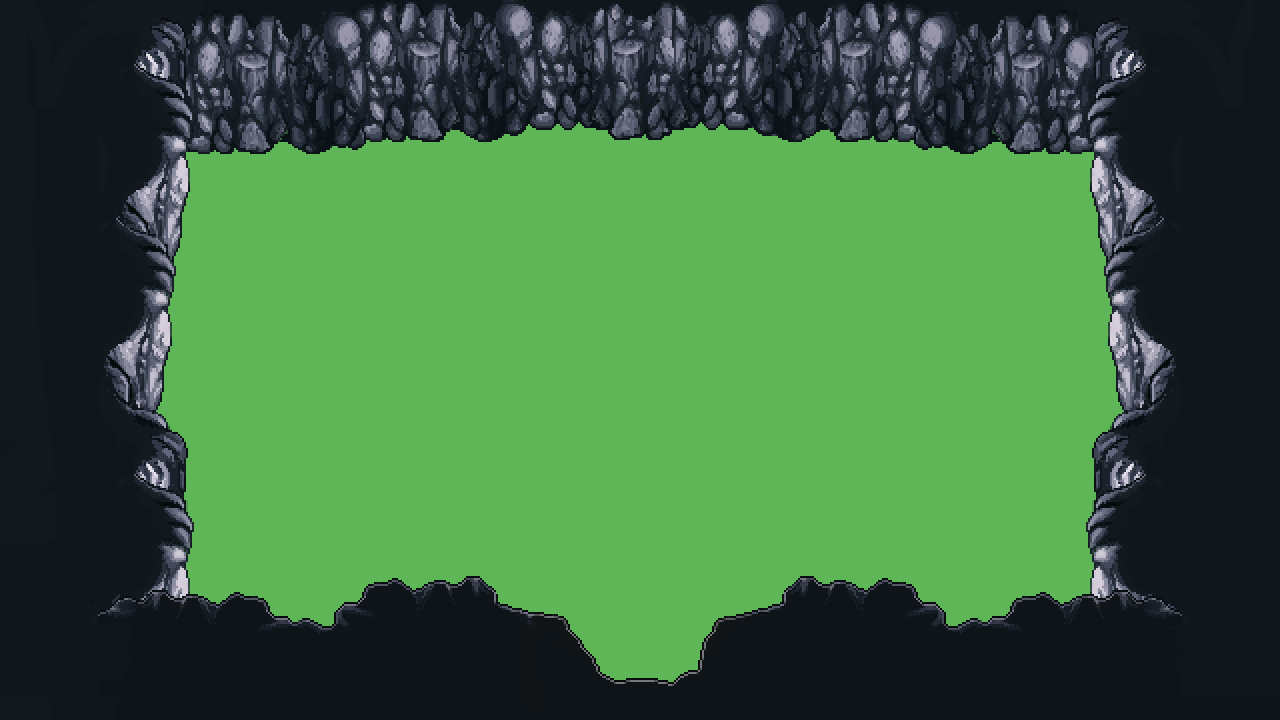 The mountain walls only need an exit (or rather, entrance), to the bottom, since you’ll only use it once as you come through a Mount Bloom exit!

Then, I started working on another type of wall, featuring houses! Tai Ming is a town, after all… Here are a few of the ones I made in combination with some of the other walls: 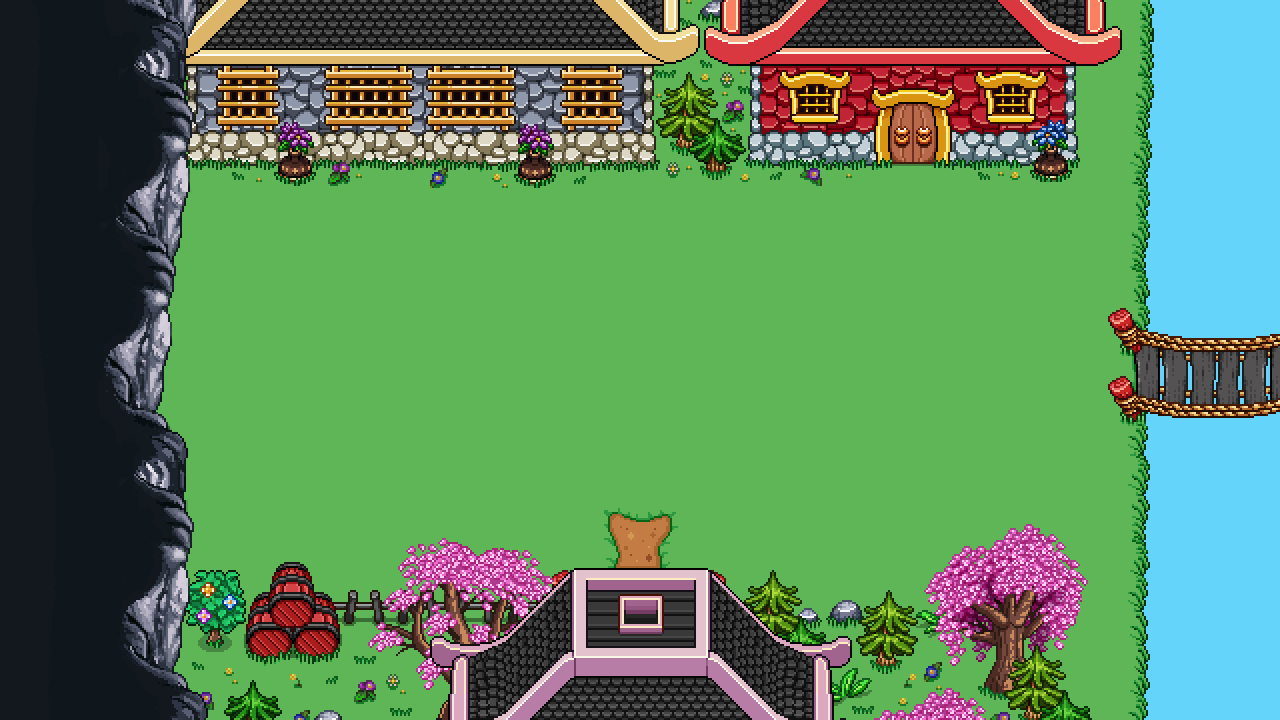 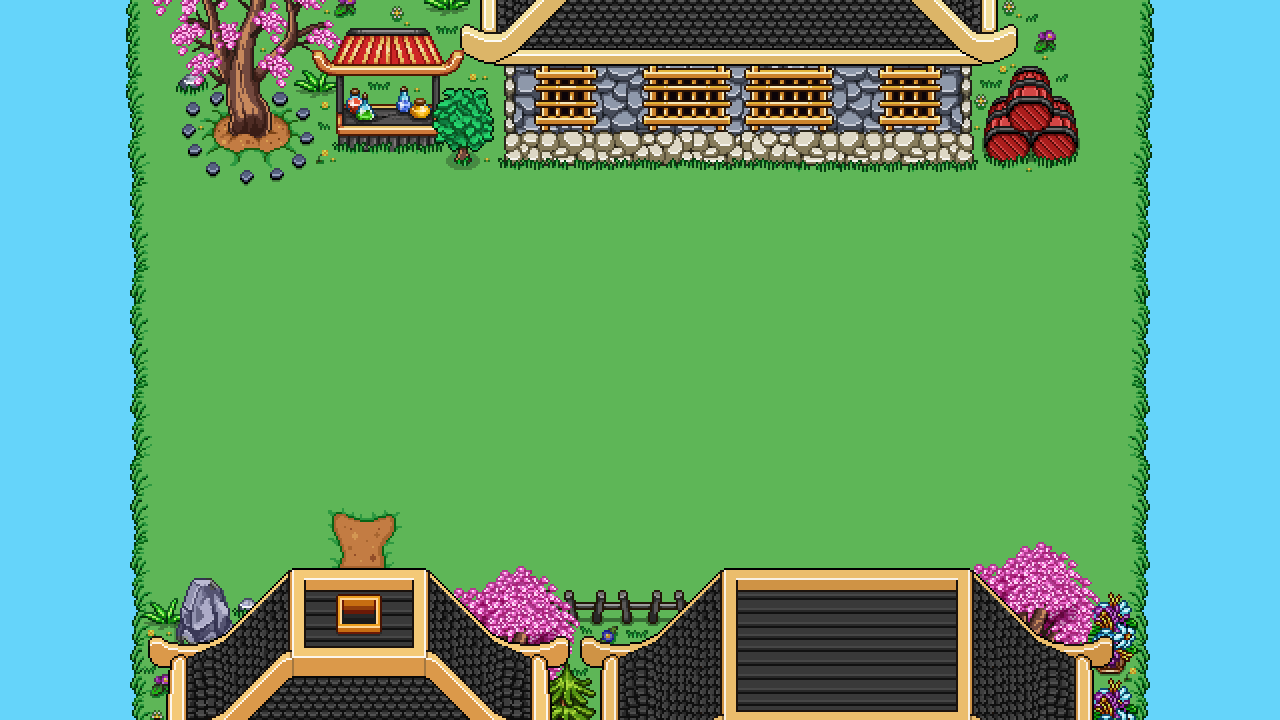 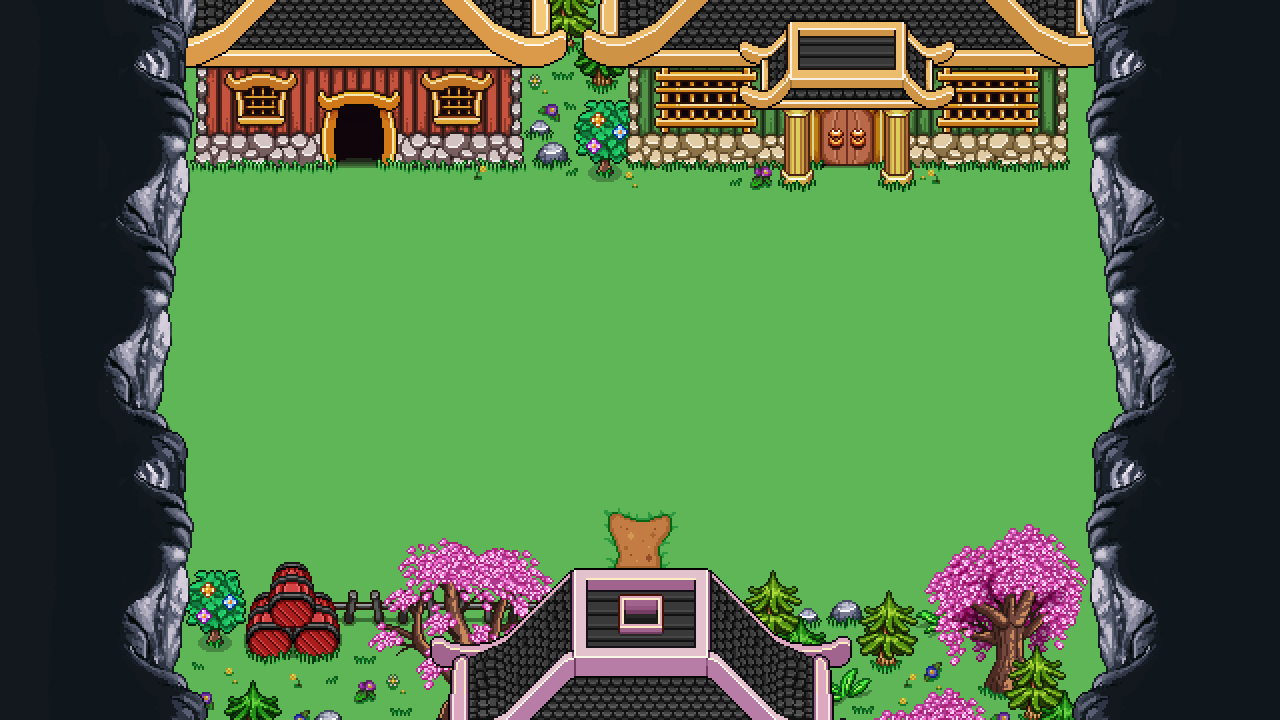 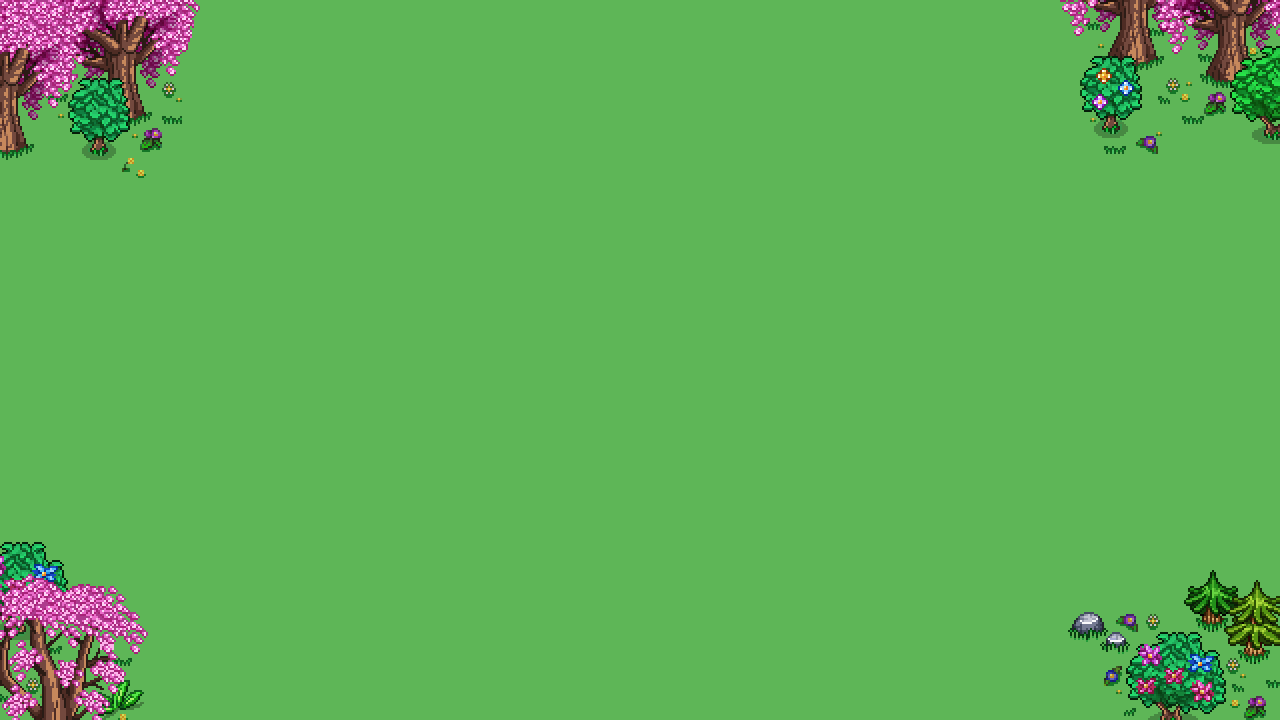 When making these “house walls”, or more town like walls for the Tai Ming rooms, I wanted to make sure they could work both alone and next to water or other walls. In order to make this work, I made small versions of each, that are small ends just before the water edges, in case they are placed in a room with some kind of water. I then made four corners (seen above) than can be added to each of the walls to make them longer, for when there’s just greenery in the room, and no water.

An example of this can be seen below. The vertical edges of the battle area used here are the smaller versions, with the corners added on top but not bottom sides, in order to make room for the water that flows there: 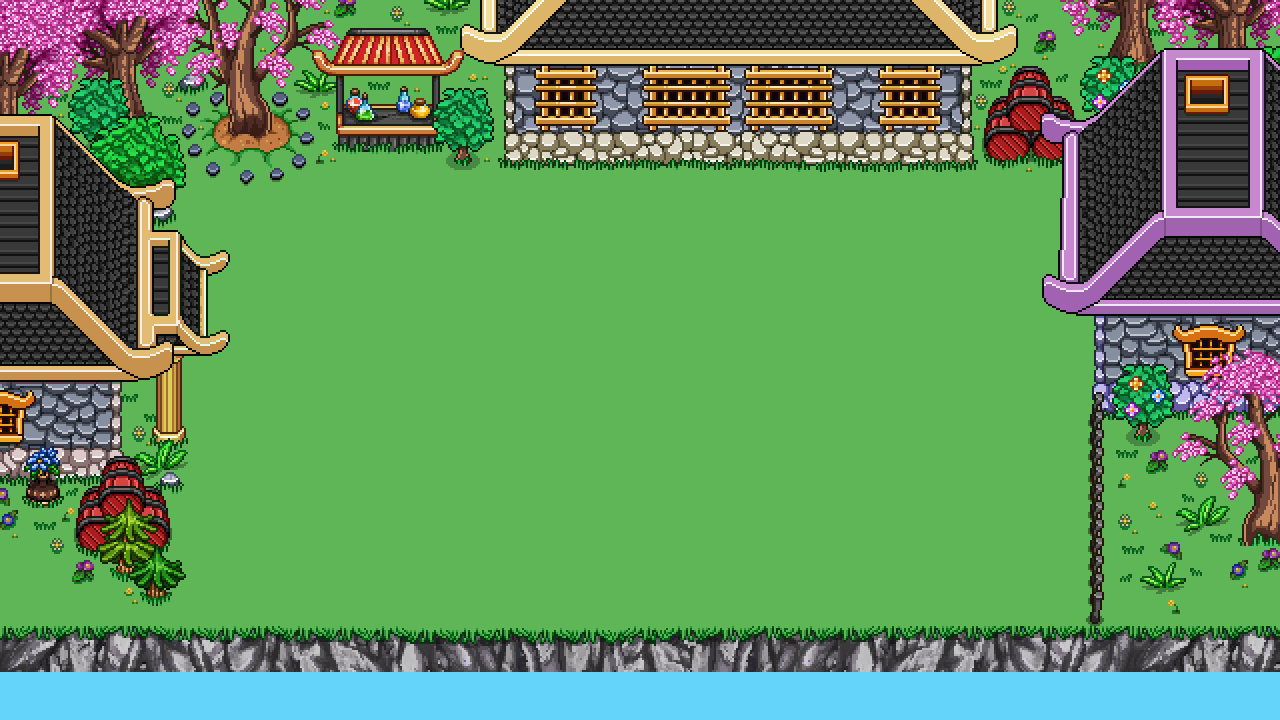 Here’s another example, with a single corner connecting the short vertical and short horizontal edges of the battle room. It also showcases how you can use both a water edge and the stone wall together: 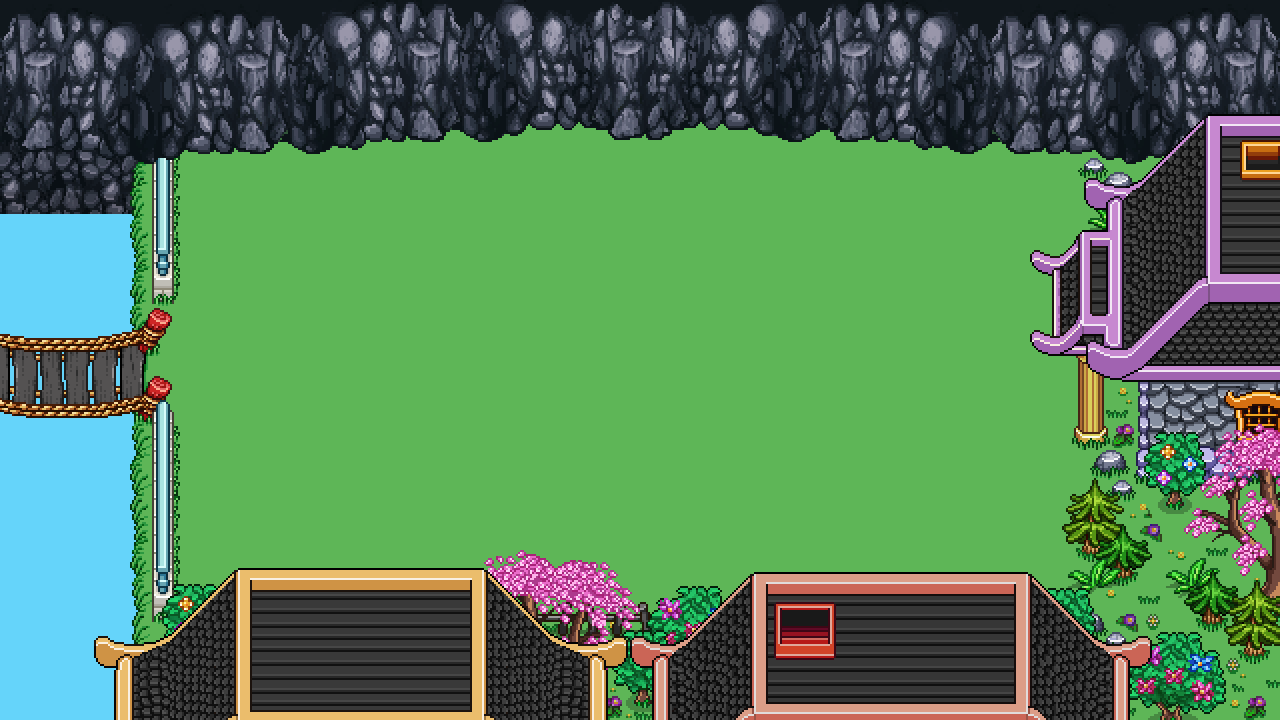 Third version, with corners on the left side! Also as you can see, there are a bunch of variations of the layouts, which means hopefully there shouldn’t be too many repeating walls: 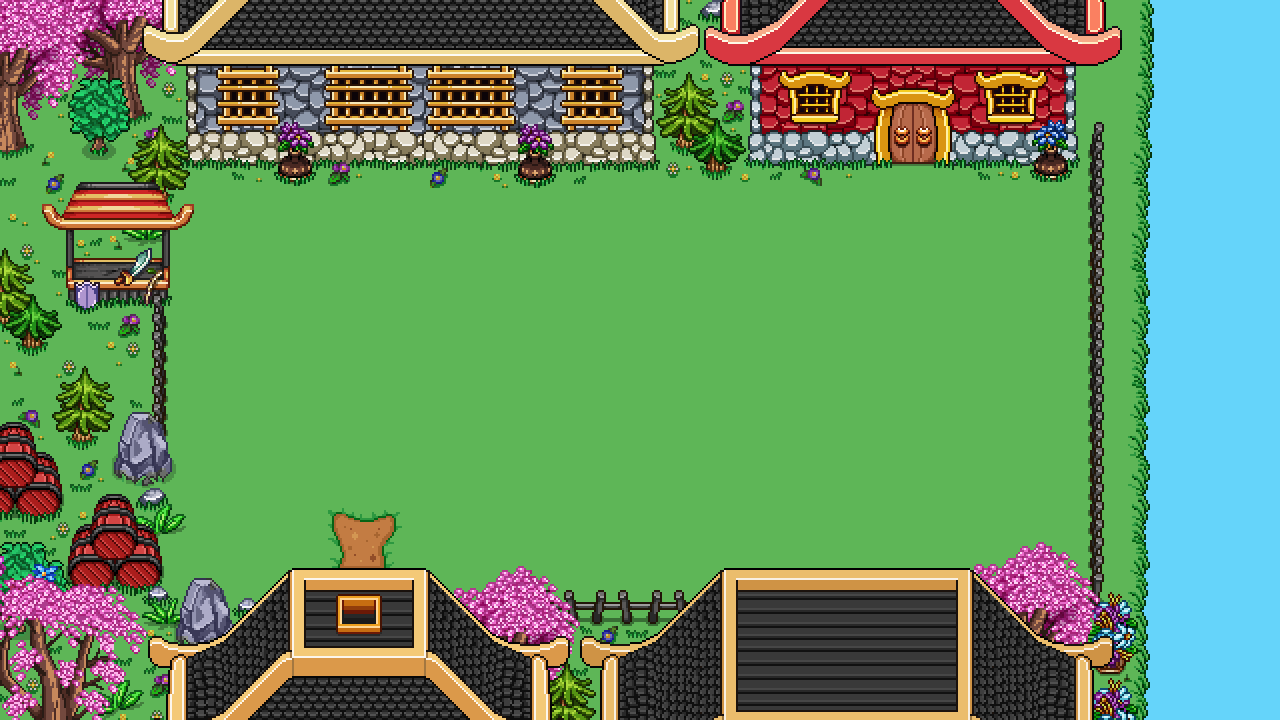 And here we have one with only the short versions and no corners: 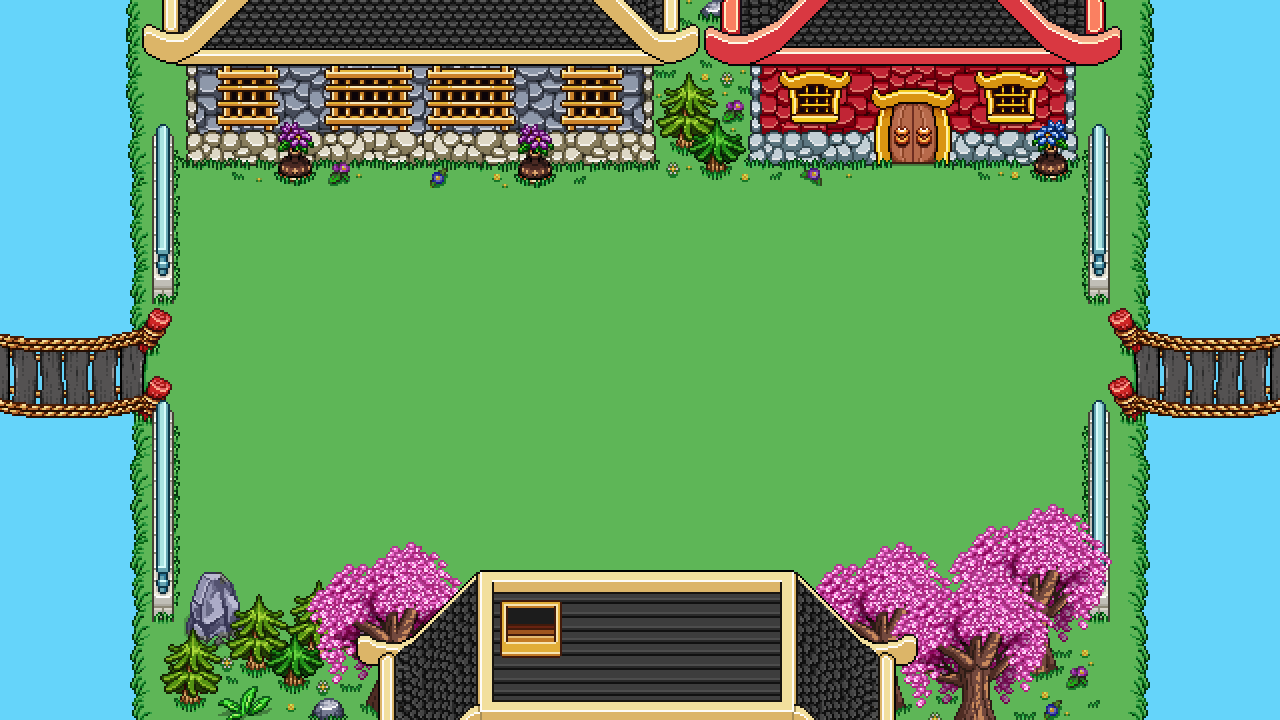 The actual battle area needs some grass decorations (that is likely to be random generated), but other than that I think we’re nearing something that feels a little more complete. Now we just need to feed these walls into the game engine and figure out in which ways to connect them to make the rooms look interesting and cool!

Now, it’s been a while since we made the first step in the progress of revamping Arcadia, but it’s finally time for another: Candy’s brother Muffin makes an appearance, ready to give you treats that will make your arcade runs easier!

The final form can be viewed below: 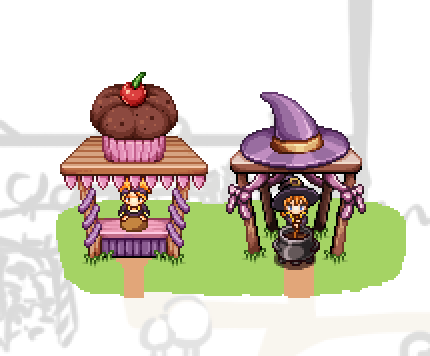 And below’s the map as of now! Quite a way to go yet, but we’re slowly getting there: 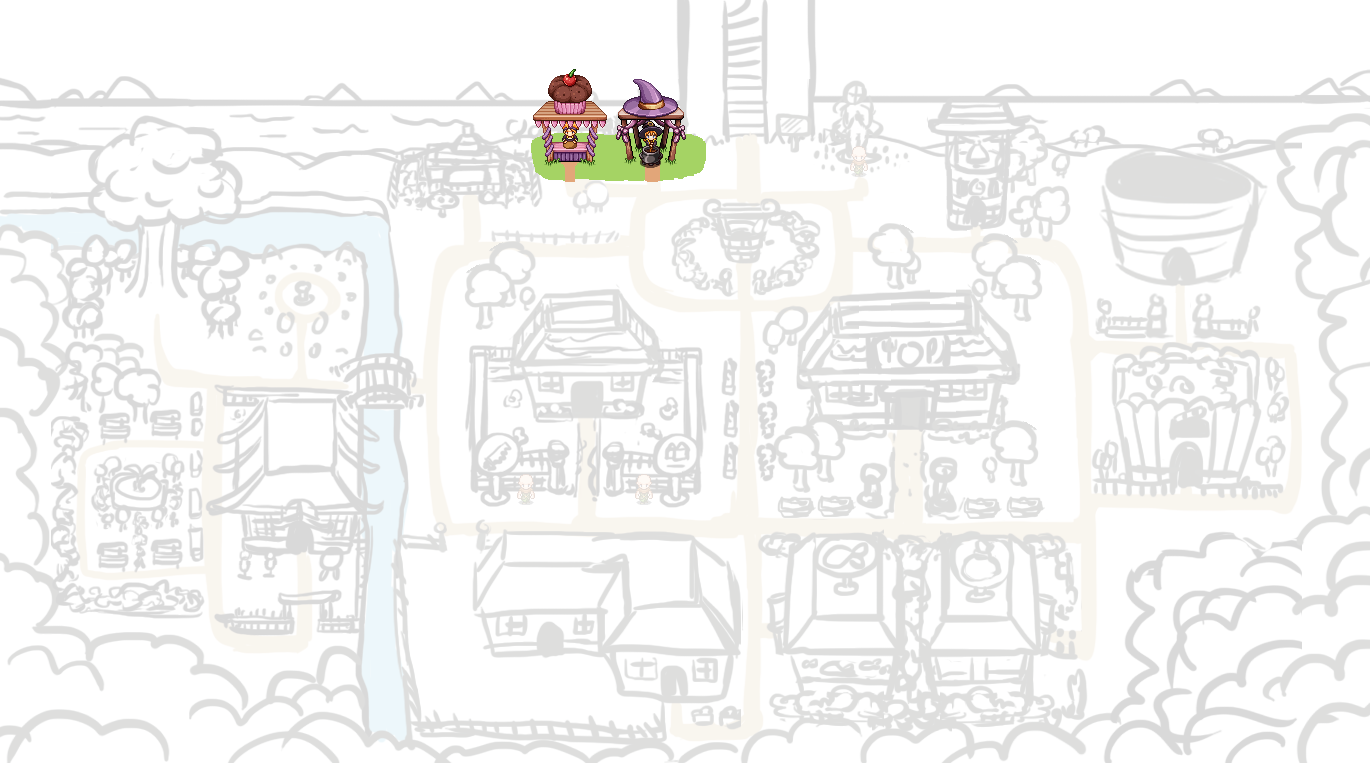 In Fred’s department, the desert enemies continue to take shape! This time around he has finished up the Mrs. Bird animations and moved on to the Solem~

See how another Mrs. Bird spawns out of the egg of another? We have a feeling this enemy will be quite annoying, hopefully in a good way! The Solem, meanwhile, will be a lone beast, few and far between due to their strength.

Since all paths will be open to the player (once the maps are actually in the game) we plan on sticking one of these guys near the entrance of the desert, deterring any stray new players on their way to Pumpkin Woods from going the wrong direction. One bout with this guy and hopefully they realize they took a wrong turn and continue down the right path! …or perhaps it’ll become a challenge to some, to see how soon they can best these high level beasts? Looking forward to seeing all the cheese strats! :)

As a bonus, Fred has created a step-by-step for the initial creating of the Solem, from sketch to finished sprite:

Excited to battle yet? I know I am.. But first we have some support skills and Arcade Mode reworks to finish :D