And another week goes by! Last week we finalized Housing and finally managed to get a Stable patch up and running with the whole thing, meaning that (unless there are many more bugs that need fixing), it’s time to focus our attention on those Utility skills! If you are one of those waiting for Stable updates, please go ahead and try housing out, and let us know about how to make it better in the future or any bugs you might find! The full patch notes can be viewed here!

I know a lot of you are sad to hear about there still not being a healing skill, but hopefully the inclusion of the barrier skill will soothe that blow slightly, while still keeping true to our design. So far, we’re all happy about the skill ideas and hope you will be too!

Teddy is currently prototyping the Utility skills using whiteboxing methods (meaning he’s winging the art with what we already have or extremely simple paint art), just to get a feel of how they’ll work in the actual game. Sometimes it becomes very clear even at this stage that some things just don’t work the way we’d like it to, and if that happens it’s unnecessary to have Fred make complex animations for skills that will get cut!

So in the meanwhile, Fred’s continuing to work on the desert enemies until we’re satisfied with the first bunch of skill prototypes, and I’ll continue to focus on the Arcadia Rework, which is likely to be the next step after the Utility skills have been implemented and the skills and battle systems have received an overall rebalance. I’m also continuing to create portraits every now and then, for the inhabitants of the upcoming desert/harbor town, to avoid spending multiple weeks doing nothing but portraits once we get there! Stay tuned :)

For now though, let’s look at what’s been going on last week (aside from the stable patch)!

First up, a list of those Utility skills mentioned last week! Keep in mind, all of the names are working names for now and the effects might differ slightly from the descriptions below, depending on how things work out in the prototyping stage.

First up, the offensive ones:

Challenge – A taunt of sorts, where you make one enemy focus his whole attention on you. This means that if the enemy is currently attacking someone else (in multiplayer for instance), it will immediately target you instead. Under this effect, you’ll deal more damage against this enemy, but it will also deal more damage against you. So, a double edged sword, if you will.

The targeting works much like a projectile: your character will go into a shouting animation in the direction you’re currently facing, and the debuff will apply to the nearest enemy inside the effect.

Death Mark – A debuff that uses a earth spike/meteor style target which you can move between enemies as you hold the skill button. Once you decide which enemy to target they will get a marker on them that will look like a meter of sorts. As you deal damage to this enemy, the meter will fill up and once it’s full or a timer runs out, it’ll deal a percentage of the damage you’ve already done to the enemy as bonus damage. It will also trigger immediately once the damage it’d deal is enough to kill the enemy.

Sleep – A skill that puts an enemy to sleep and makes it unable to attack. However, if you hit the enemy it will wake up and return to battle. The duration each enemy sleeps may vary on their type and level. There will probably be a global limit for this skill, where only one enemy can be asleep at the same time. This means that if you or any of your friends cast the skill on another enemy, the one currently sleeping will wake up as the new one falls asleep.

For the defensive skills, we have:

Meditate – A skill that you hold to regenerate EP at a greater speed. As we rebalance the skills it’s likely we’ll edit how EP works slightly, making it regenerate more slowly (among other things) – which means this skill will be more useful for more people than it might currently be. We also have an idea that if you charge x% of your EP and reach max using Meditate, the next spell will cast will be cast for free.

Shield – A shield you can cast around yourself or a friend that absorbs some damage. If the shield HP runs low and you get hit by an attack that finishes off the shield, you will take the remaining damage of the shield-breaking attack, so beware!

In single player, this shield is cast like a regular skill, while in multiplayer holding the button will bring you into a wheel (like when you control the Frosty Friend), which shows the faces of you and each of your friends characters. Press up to cast the shield on yourself, or right to cast it on player number two, etc.

The shield will also have some kind of perfect guard effect, if you manage to cast it right before you or your friend would get hit by an incoming attack, but we haven’t decided exactly what this will be yet.

Blink – A short-range teleport ability that auto targets some distance away. This means that if you tap the skill you will blink across the screen, but if you hold the button down you can move the target around to change where you land.

One important disclaimer in relation to these skills is that they’re all subject to change depending on your feedback or our experience while testing them out! For now though, this is the lineup we’re looking at and right now we all agree it’s gonna make things much more interesting :)

Now, time for another portrait: the summer fae luring her winter fae friend to the desert town!

As with the other harbor/desert town characters, nothing has been properly decided about these characters, but my general idea is that she took her friend with her, and while she enjoys herself he has a hard time dealing with the climate! I guess we’ll see if that story makes it in the end, once we finally start implementing the town.

In the Arcadia rework business, it’s time to introduce Remedi’s Alchemy, an important part of your future arcade runs…

In this first part we focus on the wagon itself, and in the next we’ll add a bunch of interesting surroundings: strange and mystical flowers that have luring the alchemist to this remote town! 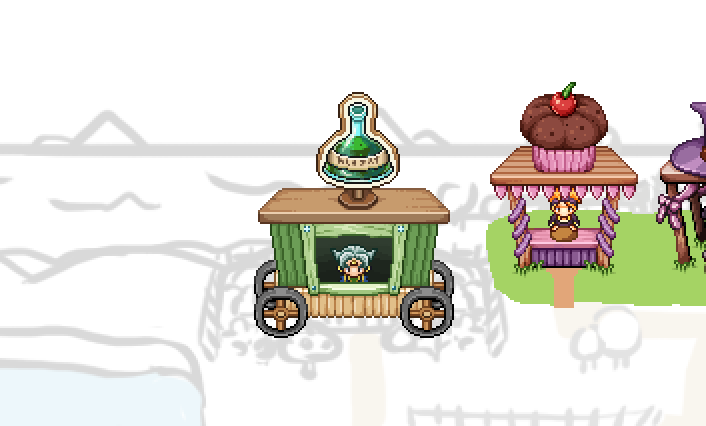 Finally, let’s end this week by taking a look at what Fred has kept himself busy with: the Solem animations! In order of appearance: Appear (spawn), attack, dig (for when he charges at you), grab (as he appears from beneath your feet to hit you), and a regular movement animation!

Important to notes is that these are still in the ‘sketch’ stage, so they need some cleaning up (as you can see on a few, there are holes in the middle of the poor Solem). This is the way Fred prefers to work when he creates animations: first making a rough sketch, then filling in more and more details until they’re properly polished (and all holes removed).


Im excited to see those utility skills in game! :D
I really like the idea of using more the just Heroic Slam to maximize your output.
Solem looks really cool!
Any thoughts on when we can play around with Utility Skills though? I really want them :>


The Blink spell seems cool but if it’s intended to be a reactionary safety net, I was thinking it might be better if one could decide where they wanted to go before they needed to use the skill. What if, instead, you simply placed a Rune on the ground and then, by recasting the ability later, you would instantly blink to that Rune.

While I like the ideas of most of them, I do want to suggest a tweak to the shield one; I myself is a big fan of damage blocking mechanics that completely negates a single/the last attack, so I would prefer it if the shield either blocked only one hit, or had lower HP than you originally intended, but blocked all of the damage of the last hit regardless of damage.

Secondly, regarding the lack of healing skills: I personally think a healing skill would be really easy to accidentally make way to OP, but I do have two ideas I think could be balanced, namely either making a passive skill that blocks EP and gives a low, constant HP regeneration, something like maybe 1%/sec at bronze. (This would however be a bit of a problem with arcade mode players that don’t care for score)

The other suggestion would be something similar in that it too would be a passive skill, but it would instead grant lifesteal, so you couldn’t just run to regen, but would rather have to fight without getting hit.

But ultimately, it’s your game, just wanted to give you my suggestions to think about and hopefully implement at least some aspects of them. Thanks for reading my suggestions, and thanks for making an incredible game!


1%/sec for 300hp character is 3hp per second, which is kinda OP for arcade. Stand still or use insect swarm and be invicible.
Lifesteal is not good either. Some builds will benefit way too much from it f.e. shadow clone speed build that will have HUGE HpS while 2h builds and mages will benefit less.