A little over a week has passed since the new utility skills went live on our Frontline beta, and we’ve had some time to discuss your feedback and make plans for our next step(s).

While we were ready to rework any skill that people felt were too unbalanced or difficult/boring to use, it seems we won’t have to: most of the skills have received positive feedback, and the main points of discussion have been whether some skills have been too OP or not: often with different people claiming the very same skills are either too OP or too underwhelming. Hopefully these issues will be solved through some proper balancing.

In regards to this, there’s a number of changes we want to do to Barrier specifically. First of all, we’ll change the color of the damage numbers that show up when the barrier is absorbing damage, as well as some kind of indicator for when the it’s is about to run out of HP. Hits on the barrier will also count as damage taken in Arcade Mode, meaning it will lower your score. You also won’t be able to resummon the barrier more than once per Arcade Room, since it’s such a powerful spell for getting through the floors (albeit with a drastically lower score).

Now, as for what’s coming next….

Instead of polishing these skills further and adding them to stable, we’ll be finishing up a more or less complete rebalance of nearly all of the skills currently in the game. This will give our sound designer some time to crank out sound effects for the new ones, and makes for a bigger, more interesting stable update.

Some of the changes we are looking into here are:

* One handed weapons will do less damage. Right now they are a bit unbalanced compared to two handed weapons since you can hit way more often with 1H attacks.

* Cast Speed will increase the speed of skills, and not just the charge time. An example of this would be the insect swarm dealing it’s damage faster (and by doing so, run out faster as well), the cloud summon hitting more often or your character finishing a blade flurry attack quicker. These will all be balanced properly, so that summons that block a portion of your EP won’t be affected as much by cast speed as skills that need to be recast.

* We’ll experiment with being able to freeze bosses: Fred will look into suitable visual effects for this, which has been our main concern, as we can’t make individual freeze graphics that suits all bosses the same way we could with regular enemies. We’ll also make a change so there’s a bigger chance of freezing enemies that are chilled (slowed), or possibly that an enemy has to be chilled before it can be properly frozen.

* The magic weapon improvement mentioned previously: the addition of an orb that unleashes from magic weapons as you hit. The orb will trigger when you’re too far away to reach an enemy with your attack, essentially increasing the range of all magic weapons. However, the orb in question will always do less damage than if your weapon hit the enemy directly, and the damage it makes will be based on your magic attack.

* New talents, at least 5 per talent tree, with a maximum of 10 extra per tree, in order to avoid players having to read through too many talent descriptions to find what they’d like to level. These will be discussed in a later meeting.

There will also be, as mentioned, slight edits of nearly every skill, and Fred’s actually already begun working on one of those! Let’s take a look at the fireball:

You might wonder what this new animation has to do with skill rebalance. The thing is, we found that some of the skills were a little lacking in effects, which made them feel less epic or impactful than they actually are. This is by no means true of all skills: so don’t worry, we won’t spend too much time on remaking skill animations now! In fact, for the most part, it’ll be minor adjustments to damage, speed or mechanics.

For the fireball, though, it being the very first skill that was created, it was time for a little upgrade. This goes to show how far we’ve come as graphic artists: the first one being made several years ago, one of the earliest props of the game, while the latter is Fred’s latest version. It looks a lot better, right?

Speaking of animations, we also have a brand new Focus animation! Since we wanted the player to be able to move around as they use this skill, we wanted the character to float in the air: both to make things easier for us, and since it just looks better when channeling the skill compared to trying to look zen while running around!

Below you can see it in action with the indicator/timer and the proper effects:

In Arcadia, we slow down a little and start looking at the details. There’s some vital parts missing, such as the mountain which allows you to enter your arcade runs, as well as actual paths and greenery! Time for a fix: 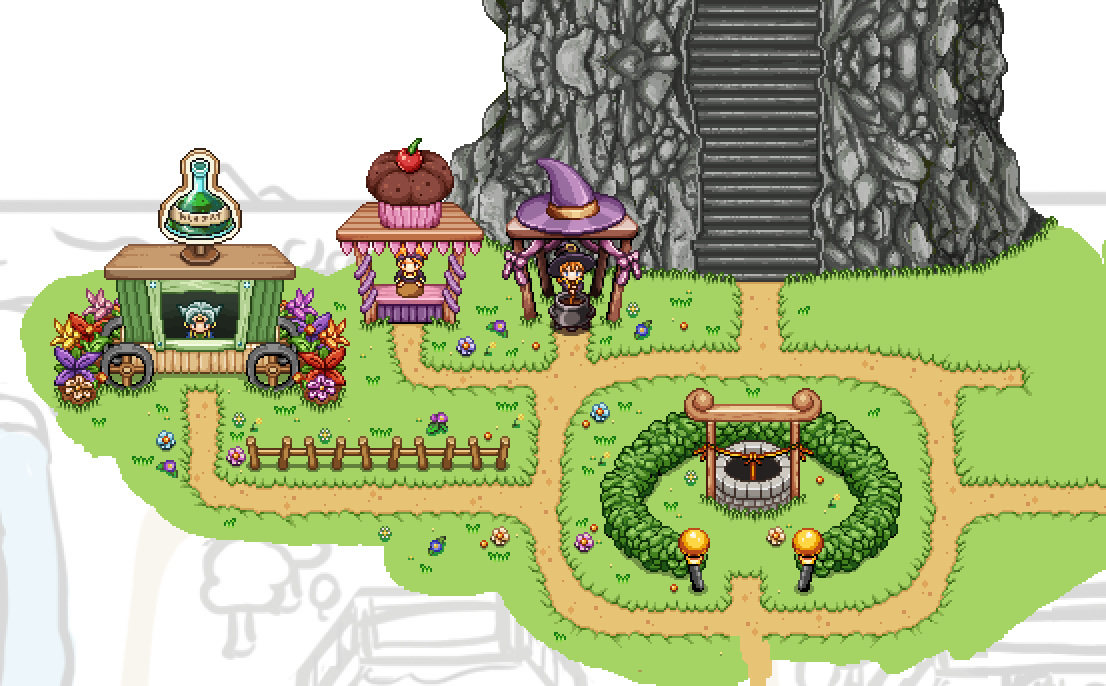 With these new details you can actually begin to see things coming together a lot better. There’s still a bunch of extras that need to be made: a few trees and bushes, for instance, but the parts that have been made so far already look a lot more finished! 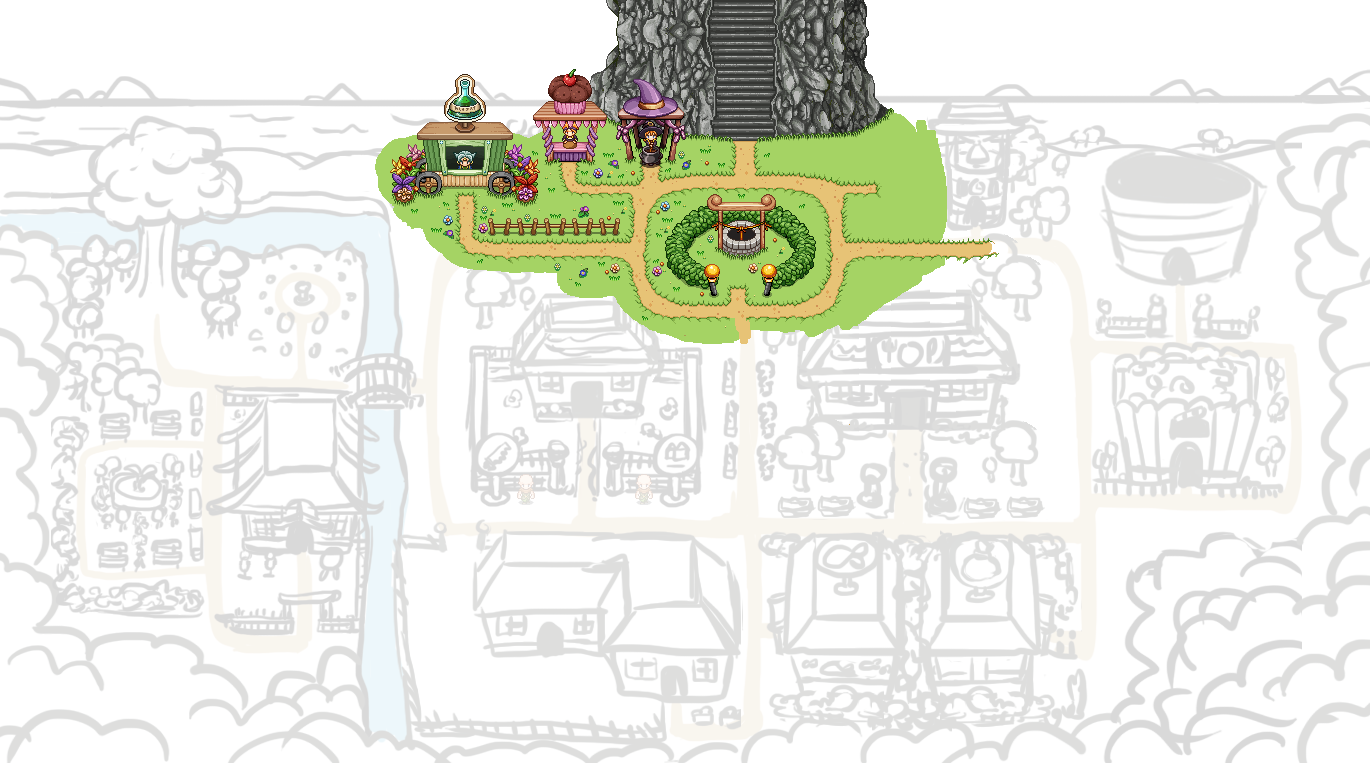 With Arcadia’s rework, we want this Arcade Mode town to feel different from the rest of the world, so almost all graphics will be made more or less from scratch, rather than reusing old sprites. This means not only the buildings, but also the greenery needs to be remade. And the next step on that mission? Trees and bushes! 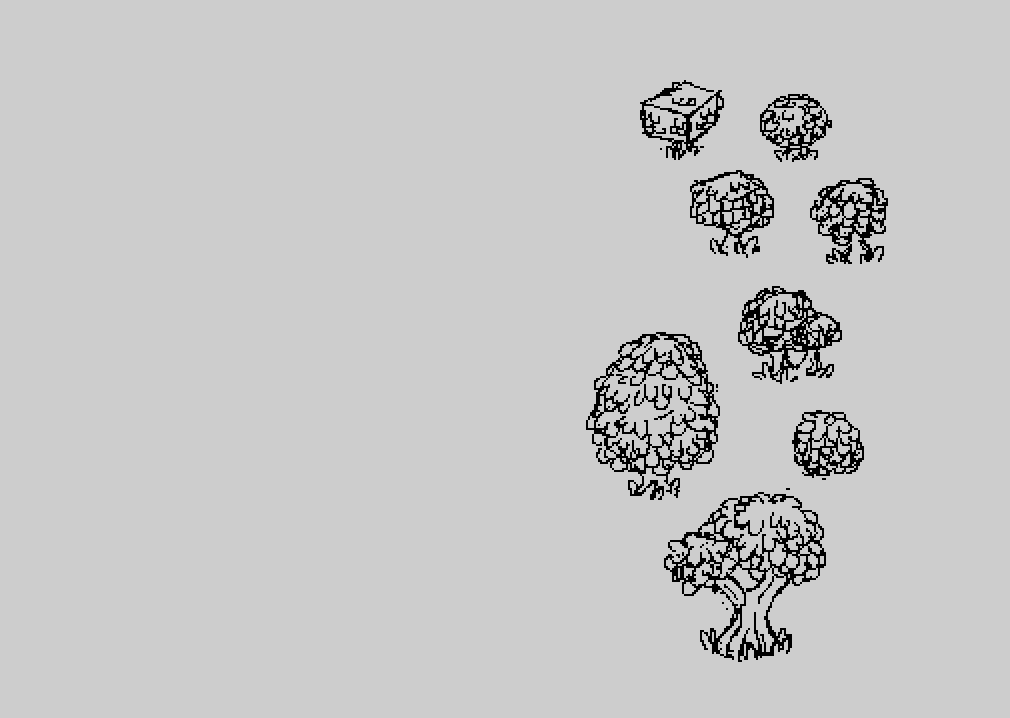 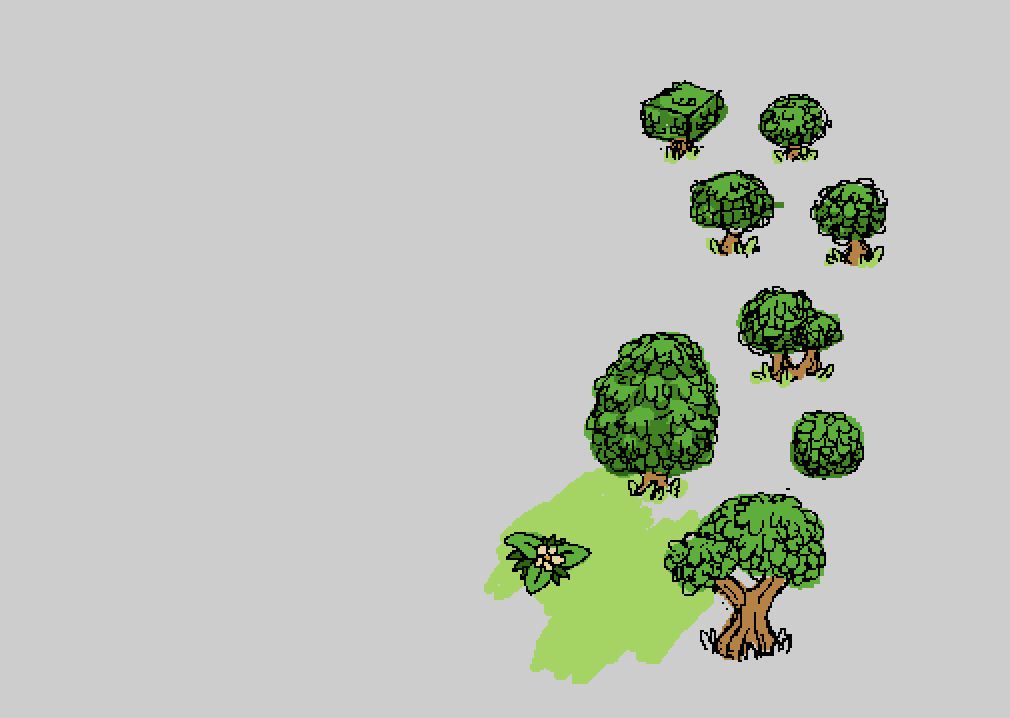 Above is a few of the sketches I made to get an overall concept of what the greenery of Arcadia could look like. In the end I thought it would be cool to use spherical shapes for the trees and bushes. First up, a bush:

Next, using the newly created bush as a base for creating a tree (with some edits):

These trees and bushes are made so that when you put them next to each other, they kind of blend together, making it hard to see where one prop ends and the other begins. We feel this will create a cool effect when creating small groves of trees: 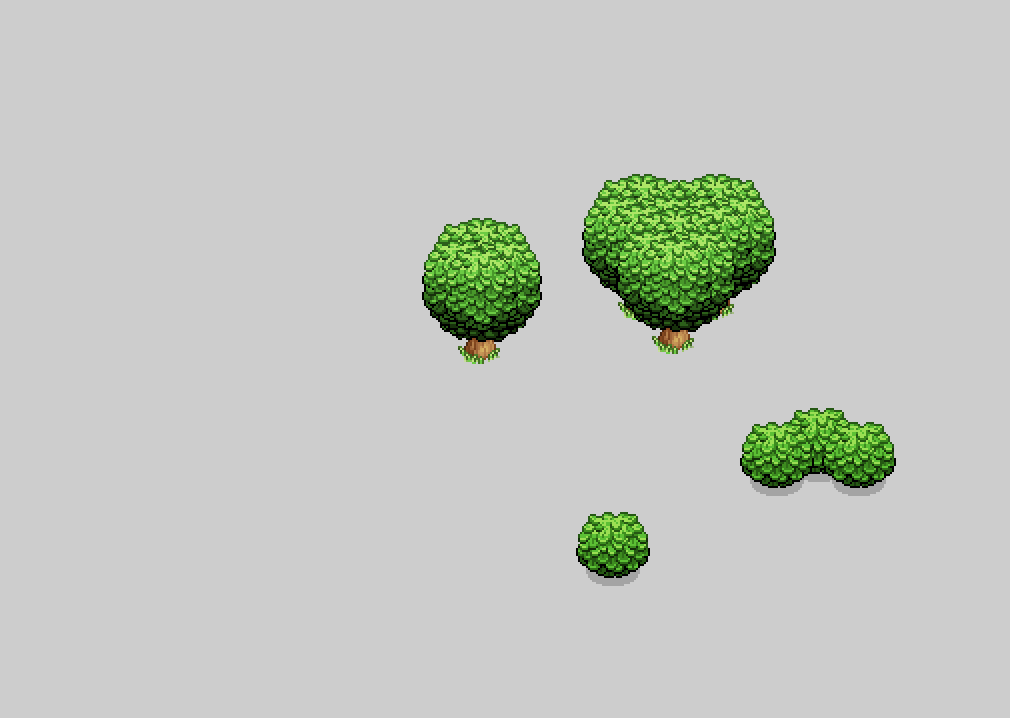 Next, I made another variation of both the trees and bushes with a more oblong shape, in order to have some variation in the greenery: 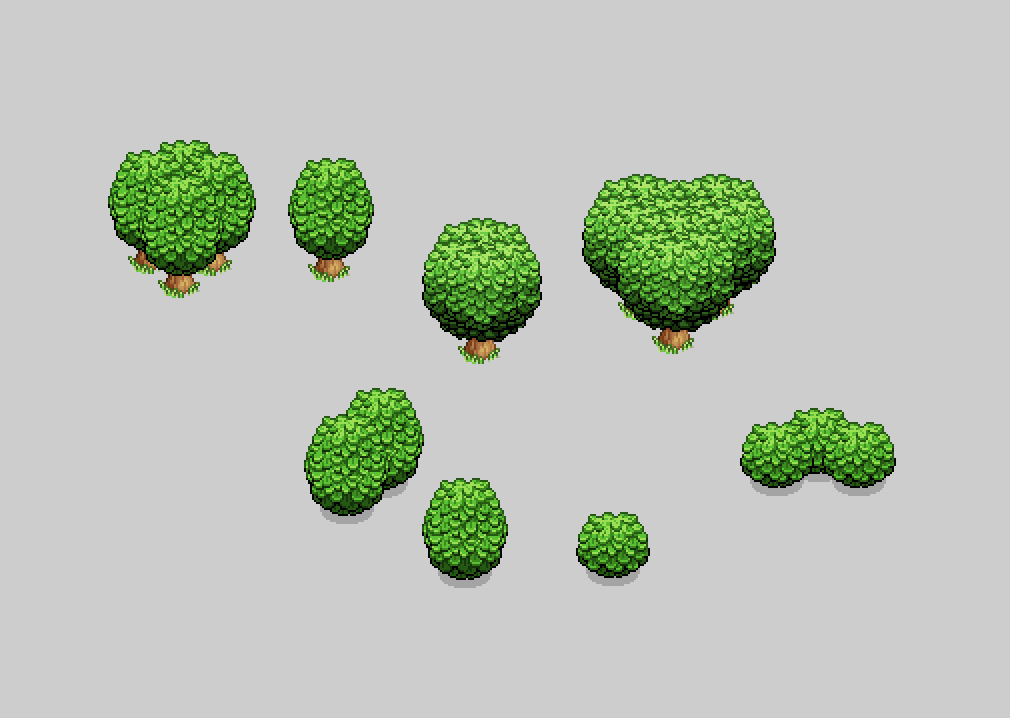 And since I like these new bushes a lot more compared to the ones I made for Arcadia previously, I went ahead and upgraded the shrubbery around the well, using the new ones as a base:

Finally, in the desert portrait area, it’s time for a portrait of a woman living in the village (they aren’t all tourists or merchants!):


OMG OMG OMG! THIS IS AWESOOME!!


Woah! This sounds really neat! Giving it a new coat of paint and rebalancing! A lot of skills didn’t seem as useful as others ESPECIALLY versus bosses, so this is good to hear. I’m also excited for the all new skills/buffs!