Weeeee’re back! In fact, one whole week has passed since we got back to work and it’s time for a new weekly recap~

As you know, before taking this break, we launched a patch with the complete rework of our current skills in hope of making them more balanced (and fun). We’ve read all of the feedback coming in, and for now there aren’t any major changes we want to do (aside from a bunch of bug fixes that Teddy already has been working on). We will keep monitoring the feedback and possible change a few things, however: such as increasing the HP of certain enemies that have lost some of their tankyness due to the increased damage of most of the skills.

Now, to properly start the next step on our journey to actually completing this game, we had a meeting today discussing the additions of more talents! We have wanted to add a bunch for a while now, as mentioned before. For now, we’ve decided on adding 5 new Melee talents, 5 new Magic talents and 10 new General talents!

Starting with the Magic talents, some talents we discussed and confirmed will be added are:

Fast Talker – Increase Castspeed
Soul Siphon – Hitting an enemy with a wand projectile will grant the user some EP
Concentration – Increase resistance to having the (magic) spells channeling interrupted by enemy hits
Specialist – Increase damage depending on how many skillpoints you have in the same magic tree (as an example, the more fire skills you level, the stronger your fire skills will be overall)
Wand Master – Icreased damage from wand projectiles

As for the General talents, some you may expect there are:

Got You Covered – Increase buff duration
Metabolism – Increase EP regen
Health Insurance – Increase healing from health orbs
Lady Luck –  Introducing a low chance of enemy attacks missing your character
Utility Flow – Chaining Utility skills lower their EP cost (the more utility skills you use in a row the cheaper their cost in EP, up to a maximum percentage). A talent designed with the true support players in mind, who need more EP to buff a full team!
Kinetic Energy – Get EP from blocking attacks with your shield
Efficient Counter – Perfect Guarding lowering the EP cost of the next skill

And the Melee talents we’ve decided on so far:

Knowledge is Power – MATK gives ATK
Riposte – Perfect guarding within x range of an enemy deals some damage to the enemy you guarded against
Blood Thirst – Killing an enemy grants increased attack speed for a short duration
Combo Starter – After a normal attack, your melee skills have increased critchance for a short duration

We’re currently experimenting with a melee talent that increases the attackspeed of your next normal attack(s) when you’ve been out of combat for a short while. In the general tree, there will also be at least one talent relating to the bow.

We’re also considering increasing the number of talents in the general tree to 21 (as opposed to the planned total of 20). The reason for this is that we’d like to fit all talents in a single page, without the player having to scroll down. Our idea is to go for something like this (super early mockup WIP, obviously, we’ll have to adjust all of the graphics to make this work): 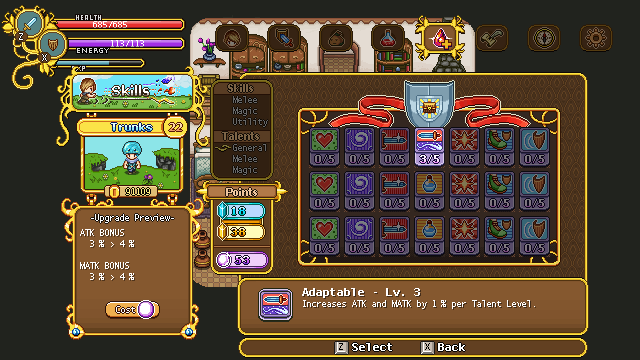 It’s a bit cluttered, but with a few adjustments we hope it won’t be too messy on the eye. We believe, at least, it will be better this way than to introduce scrolling. In the Magic and Melee talent sections, things won’t get as cluttered either, as they won’t have as many talents: at least for now, our max total is 15 each.

As for Arcadia, now that the first stage of the Arcadia is done – that is, the main buildings – it’s time to take a look at it and see where things can improve. As a reminder of what things looked like where we left off, take a peek below: 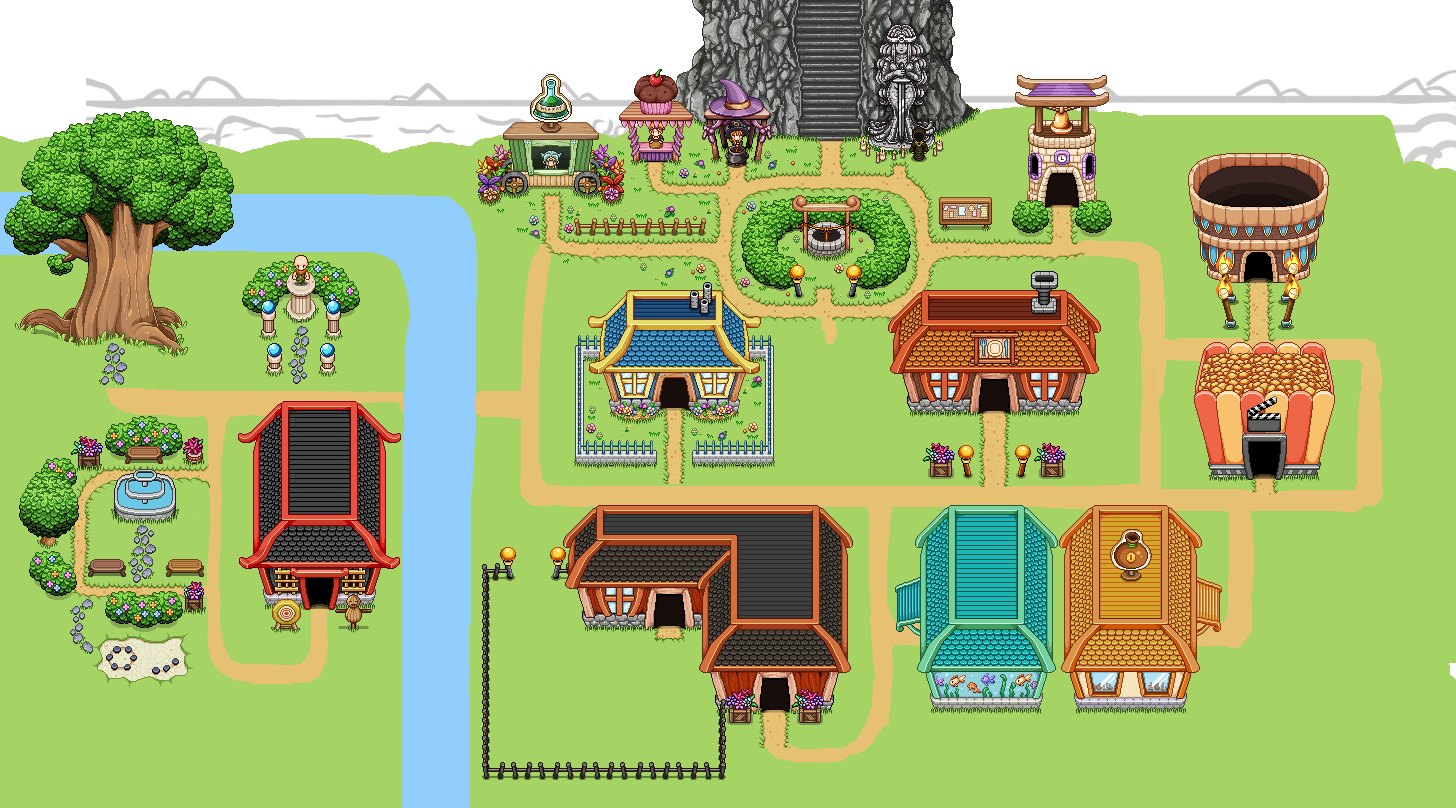 As you can see, not a lot of details or even finished pathways. The reason for this is that I wanted to be sure all the distances felt nice when actually inside the game, after the main buildings were properly made.

To check this, Teddy uploaded the background into the game and we could run around as if it were a real map, only without any colliders or the ability to actually go inside any of the buildings. While doing this, we did feel like the distances are fine, but we came up with a list of other changes which will be what I’ll be working on next:

* The map’s size will be increased in each direction. The reason for this is not so that there will be more room for the buildings, but rather so that more of the edges can be seen, such as the background that will be painted in the top part of the map, or the woods that will serve as the edge of the map.

* The Clock Tower will get another floor and I’ll remake the clock in its middle part to become a lot bigger and detailed enough that it will show a different time depending on if it’s daylight or nighttime.

* The Arena will be reworked: we’ll make it a lot bigger, to make it feel epic enough.

* The top, middle part of the roof of the Aquarium will be turned into a pool of water, where silhouettes of fish can be seen once you start catching some!

* The benches in the fountain/garden area will be moved a bit higher, to make more room for whatever characters might find themselves sitting there in the future!

Along the way I’ll also start making the proper paths and decorate the areas with flowers, fences and other small things. Already, we feel this place is a lot more vivid than the old Arcadia was, and by the end of it it’ll hopefully be a truly cool and polished place :)

Now, time to fix those things! First up, the clock tower:

As some of you mentioned, it’s a little short, so we’ll make it slightly longer (though honestly, not by much: we still want the bell on top to be clearly visible when you enter the building). We also wanted to make the clock bigger and more detailed, so that when you change what time of day it is, the clock will change as well. Also, some silly decorations, because why not: 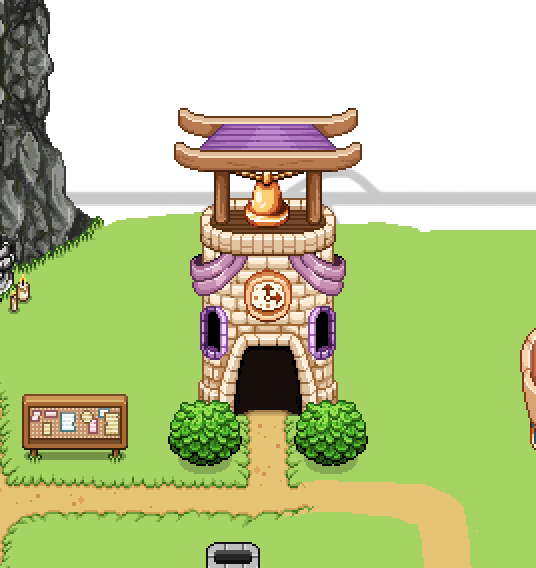 Next up, some minor detail additions for the Cinema and Inn, adding some fences and decorations. Proper grass, flowers and further details will be added once this second iterations of town is completed:

Moving on to the Arena, we decided to make it larger (and in turn, more detailed) so we made the top part of it higher, and the whole thing wider. For decoration, we added a few posters showing upcoming challenges or fights to take place in the arena. I mean if they don’t advertise what kind of stuff goes on there, how will the NPCs of Arcadia ever get interested enough in going? Gotta sell those tickets!

And here’s the new and improved, slightly bigger arena: 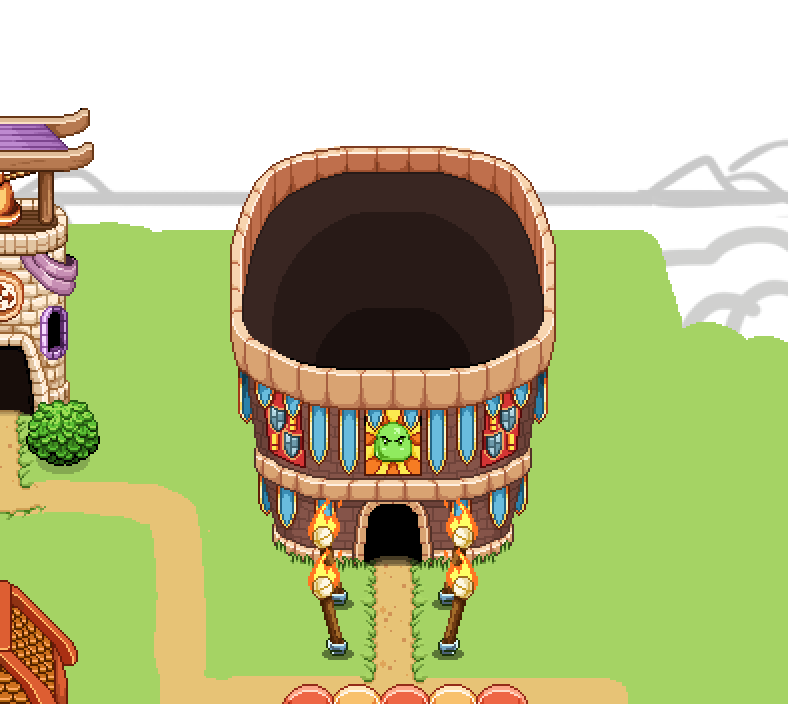 We’re also preparing the Aquarium change(s)! First by moving it and the bank to align with the cinema, and next filling the top part of the Aquarium’s roof with water. In the water you’ll see fish silhouettes once it’s properly added to the actual game:

Finally, increasing the size of the map: 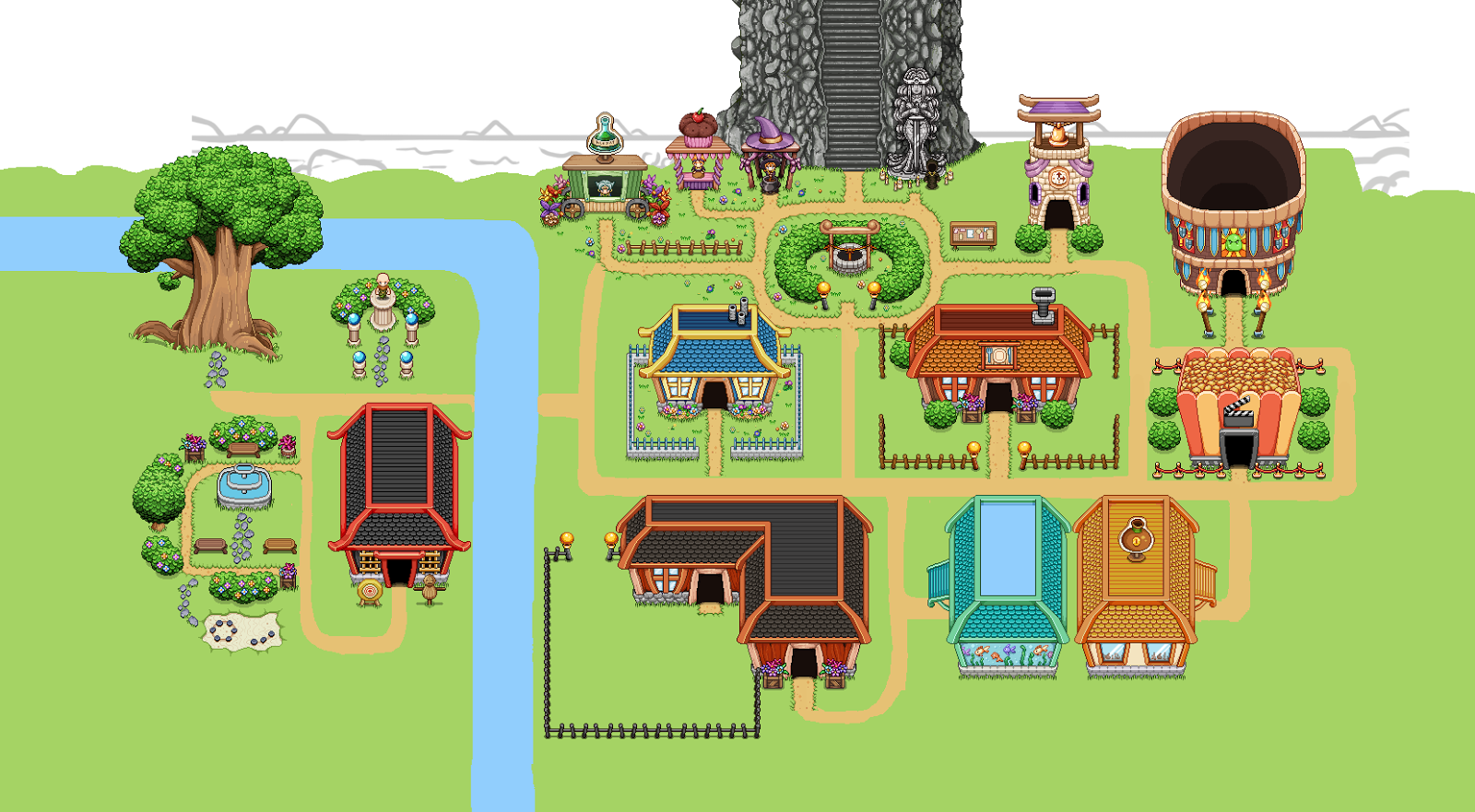 It is rather a lot bigger now, but most of the extra space will be covered in trees and only serve to not make it feel like the map is cut off too close to you. It does feel a little more epic if you can imagine the vast forest expanding around the town, after all!

And to end things this week, I’ll throw in a brand new portrait!

Since I got back I wanted to try a slightly different rendering style for the final sprite (particularly for the eyes), which I think turned out alright:


Really looking forward to these changes, they look fantastic!


My god, give me this new Arcade mode! O_O
I can’t wait to return to this game and play the hell of its Arcade mode! :o


I just love your art!