As promised, we’ve been crunching away with the Halloween Forest this week! We’ve got the basic color scheme and props down, as well as nearly all of the enemies that will inhabit the region.

Apart from this screen, we’ve iterated the whole forest layout to something we feel pretty confident will work out, so what’s left now props wise is mostly bigger set pieces, like the witch’s cottage, and putting everything together in a nice way! 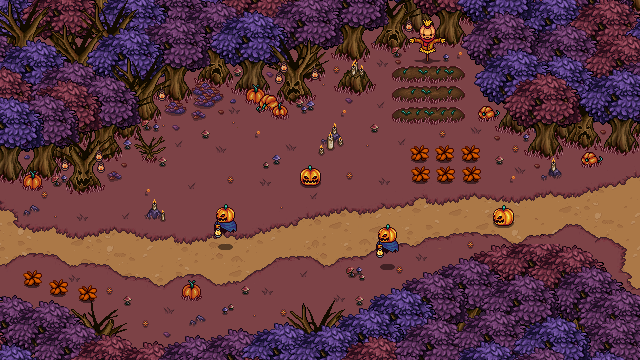 Here’s the enemy lineup Fred’s been working on 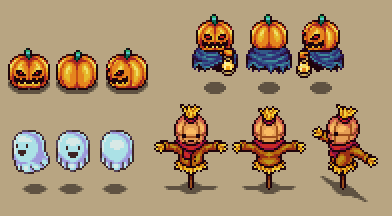 And below are idle animations for a couple of them!

We’ll also be adding a plant enemy called Halloweed, which is an upgraded version of the flower you might’ve spotted in our videos. We’re still trying to nail his color scheme though, hence his absense in the lineup! He’ll use his vines to whack players that are close to him, but unlike his less agile brother, this guy will burrow and chase you underground if you’re out of his reach for too long!

Encountering all of these enemies all at once would certainly be a daunting (and frustrating) challenge, so we’ll spread them out a bit and try to make sure the spawn compositions are varied and well balanced!

Next Week: Even more halloween stuff will see the light!


Looks great! Is it the idea that the game will be released for Halloween? :P


The pumpkin reminds me of this guy. http://zelda.neoseeker.com/w/i/zelda/e/e1/Oracle_Of_Ages_Pumpkin_Head.png

From oracle of ages.

The game is higly influenced by the secret of mana series. So it’s no surprise that some if not most of the spriteset’s look kinda identical to the ones of the original series.