With the new year coming, it’s time to plan new things. For us that means it’s time to start thinking about the harbor town, a place which has been planned for a long time but never sketched and never discussed in greater detail. So that’s what we’ve done now!

Basically, we’ve had a huge brainstorming session where we just talked about what we’d like to see in the harbor town, what would be cool and a little how things would look. Here’s our list:

The Harbor – Obviously a harbor town needs a harbor or it’s not much of a harbor town, right? So we’ve planned a long dock, next to which there are a bunch of ships. Some will look like regular ships, others might have special themes: a viking ship perhaps, seeing as we’re Swedes and all? 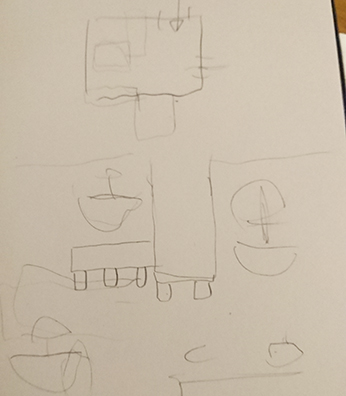 “Loading Area” – An area next to the dock with a lot of strange crates and sailor carrying stuff and loading stuff onto carts and such.

Market Place – A pretty big area with lots of market stands: some where you can buy the usual stuff and gear, some that carry exotic items or fruit for show, to give the area a bit of flavor. 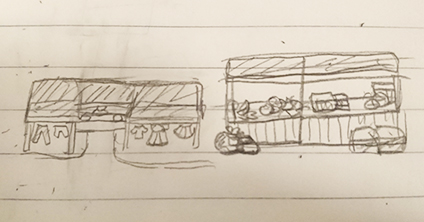 The Beach – A small beach with touristy things such as sunbeds and blankets. Tourists walking around enjoying the sand, water and hot weather!

Ice Cream Parlor – Probably next to the beach? But who knows! Anyway, an ice cream parlor filled with tons of ice cream! Probably some tables outside where people can sit and enjoy their treat.

A Church – With Grindea’s statue inside and one of those creepy priests!

Houseboat(s) – One or a few, for a more interesting way of living.

Regular Houses – A few where NPCs live, one of which will be an author which you’ll help complete the final part of her best selling series! We’ll also add this author character earlier in the game, once the library is implemented. We’d like her to have a book signing there in the beginning of the game, up until the festival (or so), for added recognition once you get to the harbor town (where she’s forced to live away from all of her fans so she can finally complete the next book)!

Wells and Fountains – The town is in the desert so they better have water available for the heat! 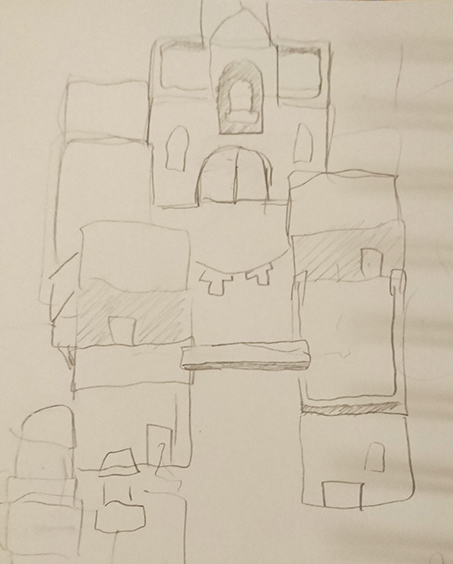 Now we (or well, I) just need to mix all of these things together and make a proper sketch of what the town could look like with all these ingredients included. First though, time for some icons and small interface fixes! All related to Arcadia, of course. First up, making a new version of Bag of Tricks, featuring Trunk instead of Bag: 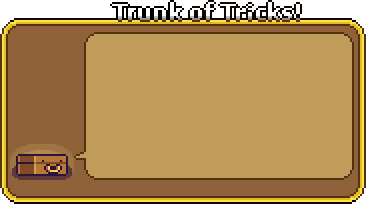 And speaking of Bag, that guy’s actually the inventory icon… not very fitting for Arcade Mode where he doesn’t even exist. Time to replace him with Trunk:

Next, true icon galore as it’s time to make icons for the Treats & Curses we’ve come up with so far. In order of appearance: More Elites Curse, No Heal Curse, No Elites Treat, More Healing Treat, More Treasure Rooms Treat, and Time Crystal Treat (they will probably get better names later):

Finally, not exactly an icon, but cleaning up the background a little! Since it’ll move around as you run across the map (parallax wohoo), I needed to clean up holes of stuff I thought would be permanently hidden behind buildings (oops):

We’ve also been sketching and talking about the details surrounding two big upcoming things: the final desert map, and the interface at the Cinema in Arcadia!

Starting with the desert map, this is the sketch we showed a little while ago: 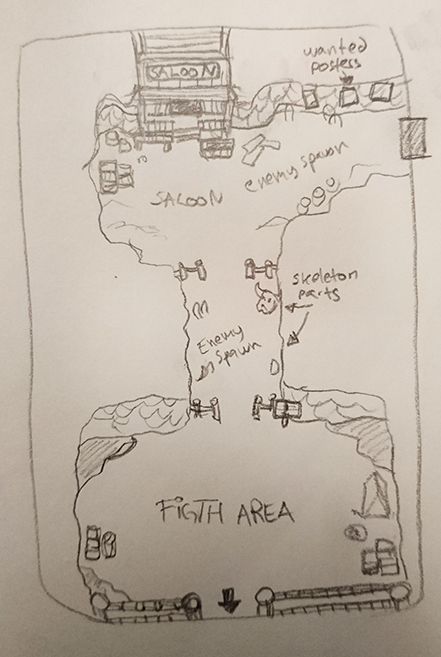 When I made this sketch I paid no heed to character sizes or what the distances between each section of the map would be in the game, as it was a sketch made on paper after all. Now that we need to translate the sketch into something we can actually use, we need to fix that. 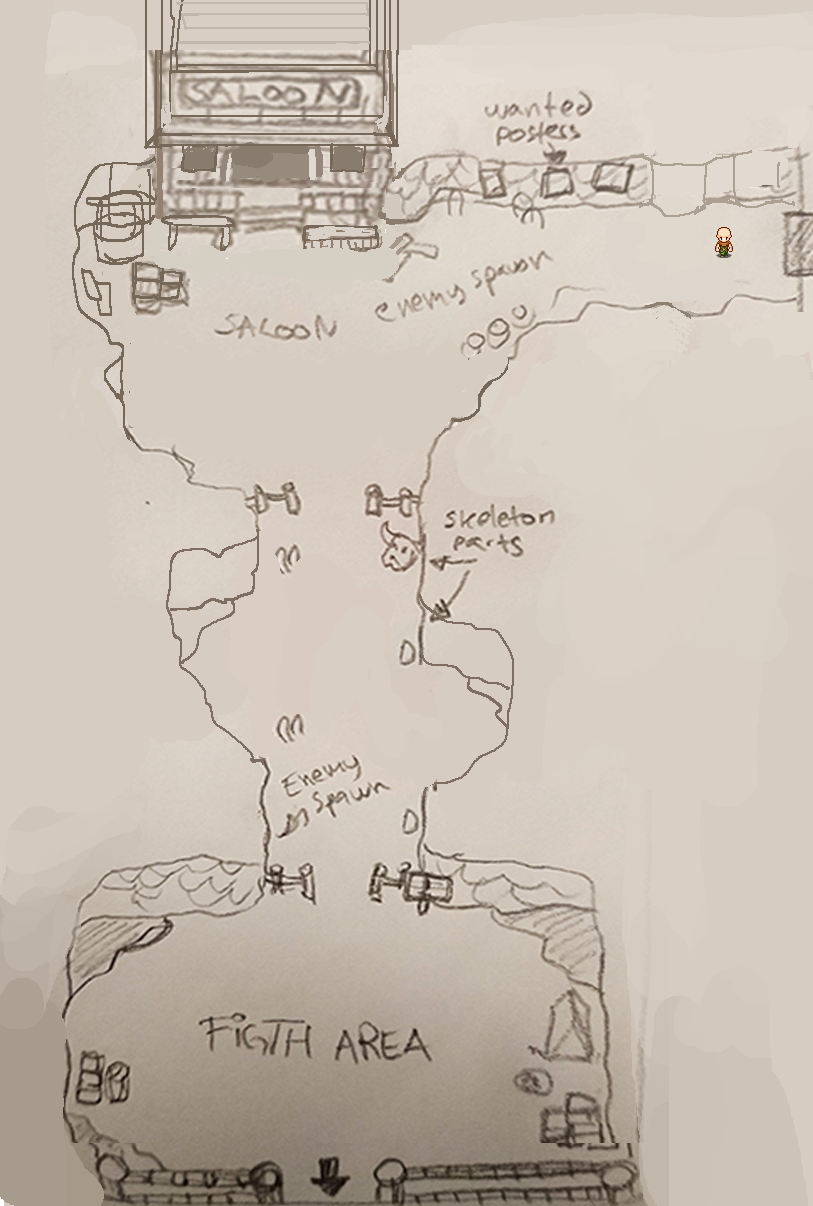 In the above version of the sketch I’ve brought the whole thing into Photoshop and copy pasted a player character into each section, using it to determine distances and how big each thing is. The result is that certain parts of the sketch have been enlarged to better fit the character(s) that will run through the area. For instance, the part above the misspelled fight area has been a bit enlarged on both sides, and there’s a longer corridor coming towards the Saloon from the top right.

Once this was done, we brought the map into the game to run through it and try it out for ourselves (it’s a much different thing actually playing through the map compared to looking at a static character in the midst of it): 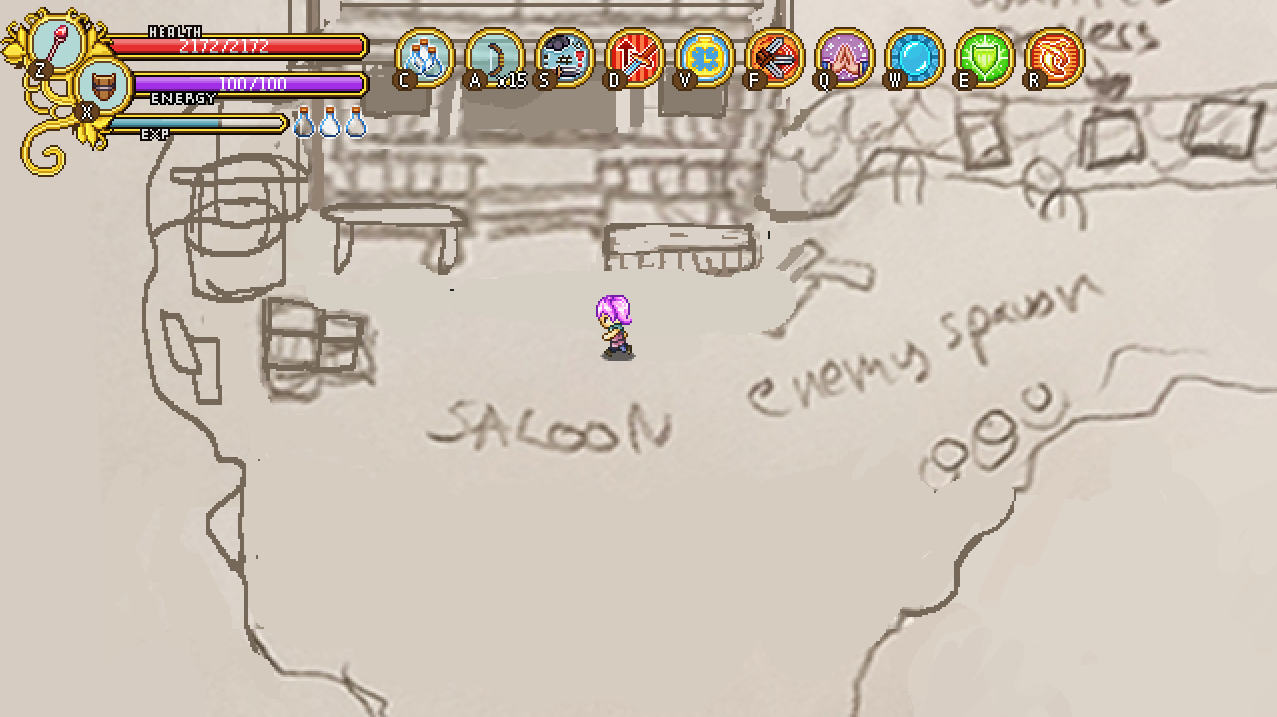 Again, we felt some areas were too small, so we made the corridor before the Saloon even larger and added a small space where you can more easily battle enemies there. The area before the (still misspelled) fight area was made larger as well, with the option to add a cave (can’t have too many caves and potential extra maps). Finally we actually made the Fight area slightly smaller to give the user interface in the top of the screen more room without it having to completely cut off the walls. 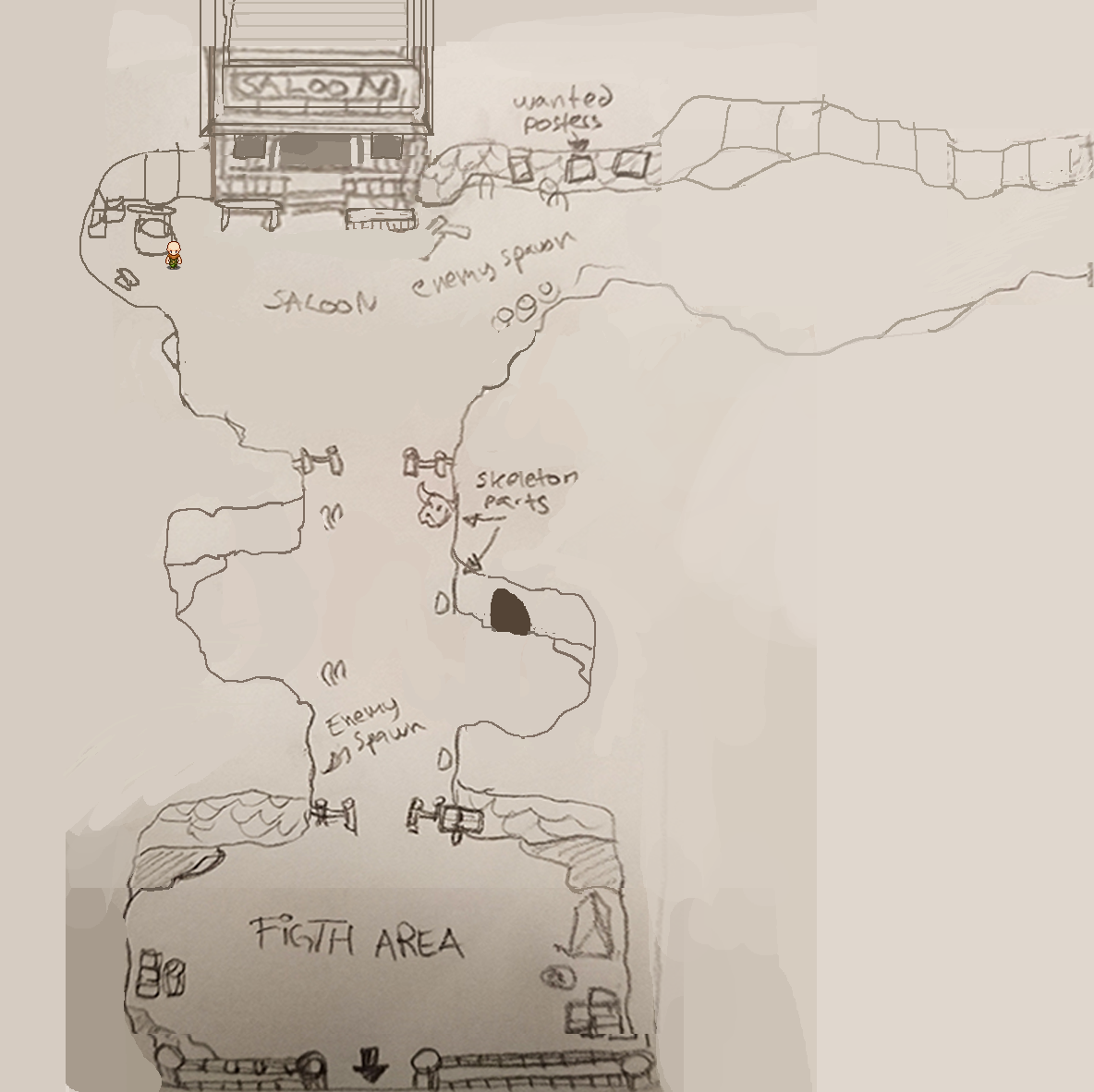 As mentioned, we also talked about the Cinema, how it would work, and how best to make an interface for it. We decided that when you open the cinema interface you’ll be presented with six options: Personal Best, Most Recent, Favorites, Friends, Public and Sharing.

In the “Personal Best” section, you’ll be presented with a list of your top best runs, automatically saved for your rewatching pleasure! Same thing with “Most Recent”, but with your most recent runs rather than the best. In “Favorites” any runs you’ve saved as a favorite will be available, both your own and those of your friends or strangers: which brings us to “Friends”, where your friends top runs will be available: each friend having one entry each. In Public, you’ll see the runs with the highest scores, and in Sharing you decide whether you want your runs to be shown only to yourself, you and your friends, or if you want them to be public to anyone (i.e if you end up on the high score).

Here’s a very early sketch showing what the selection of a replay could look like, featuring your character’s face (+ parts of the poncho and hat), the top two skills you used, what score you got and which floor you reached: 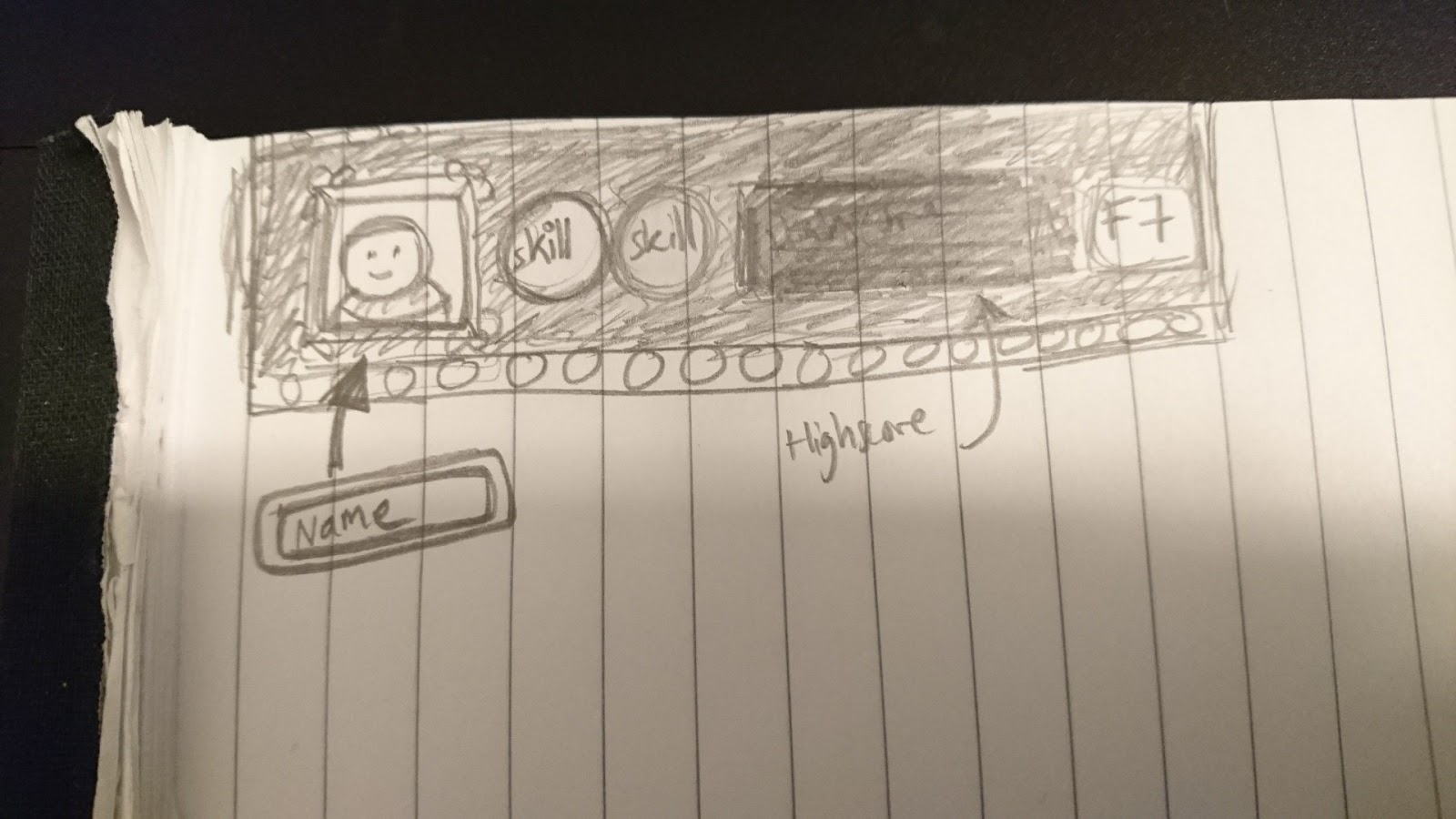 Continuing on with the cinema interface, though, the first thing we need to design is the header:

I went with a bag of popcorn and film strip to decorate the sides as this felt like two iconic references to the movies! Keeping with that spirit, I designed the movie info boxes to resemble film strips as well (as seen on the sketch earlier):

Also as mentioned earlier the info shown will be part of your character, it’s name (or the first 10 letters of it), the two highest leveled skills, the score (in the brown box), and the floor reached (golden shape at the end). In the final version below, I added a star to indicate someone having added that particular strip to favorites: 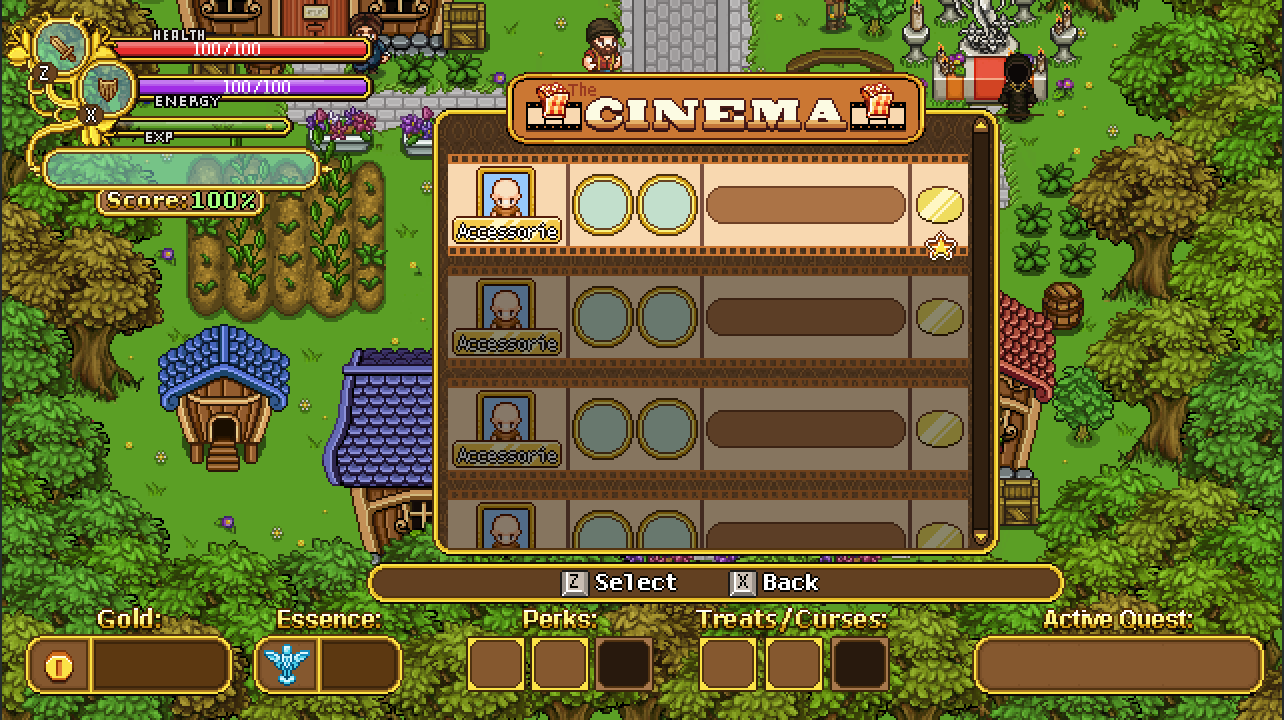 Speaking of which, this interface needs quite a few new buttons as well, in order to select everything! Without further ado: 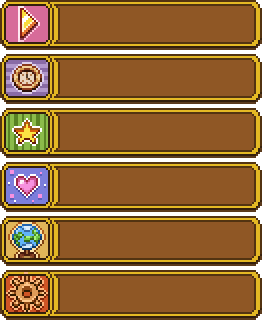 From top to bottom: Play Clip, Most Recent, Favorite(s), Friends, Public, and Settings. The last one will lead to this rather simple popup menu, where you can select who can view your replays by moving left or right (the options being only you, only friends, or public):

Finally, let’s take a look at another portrait. This guy is designed after one of the archaeologists Fred made a while ago:

Like most NPCs made recently, you will run into this guy in the desert, where he’ll be busy excavating some new findings (and in doing so, unfortunately blocking your way for a while)!

Next week we’ll discuss and continue designing the final interfaces for the Arcadia Rework: the one for Master Ji’s shield challenges, and the UI that shows information about each building you can build. After that there’s mostly some smaller detail stuff for me to do before I believe I’m done with all Arcadia Rework things! Exciting times.