As usual there’s a lot of planning and designing going on in between our actual graphic/programming jobs, and with Arcadia there’s been a ton of it. Here’s a couple new things:

Intro Pacing: For new players, Arcadia can be a bit much to grasp in the beginning, and that will be even more true after the rework is complete. There’s a ton of empty plots ready to be purchased by you, new characters and quirks that are unlocked from the beginning or will appear as you play (such as Candy and Muffin who were scheduled to appear after you’ve reached a certain floor or when you’ve died x times respectively).

To pace things a little better, we’ve decided that the first time you spawn in Arcadia, there won’t be any signs near the empty plots describing what they’ll do. Instead, there will be a cutscene where your new partner in crime introduces himself (Trunk), and you’re off on your adventure. The ability to purchase things will only become available after your first death, at which point you’ll actually have some money for the first time: and to further invite people to aim for a plot purchase, a NPC will provide a quest with a gold reward.

A couple of deaths after that, Muffin will appear to help you out with treats, and after a while (or after you’ve reached a certain score and/or floor), he in turn will have a quest for you, which is to bring back Candy who has gotten lost somewhere. Finishing this quest will unlock Curses.

And so instead of everything hitting the player at once (or just randomly), we feel this step by step introduction will be easier to grasp for new Arcade Mode players and sets things up more nicely.

A new type of room: or perhaps, rather, another thing that can happen in event rooms! In some event rooms in the future, there might be a captures NPC tied to a pole or shut in a cage, which upon inspection will trigger a mini boss battle. Winning against this mini boss will unlock the captured NPC in your town, where they might just be another friendly face (with a reward?!) or provide new quests in the future.

More Curses:
* Each room’s edges are burning
* The floor is ice
* Defeated enemies leave aoe effects where they fell (such as blind, poison gas, acid, etc)
* Temporary blindness upon entering a new room/Blinding shrooms appear in rooms (haven’t decided on which of these variations yet)
* Enemies from the higher areas appear in lower floors
* Player takes double damage

Bishop’s Special Runs: Since some people (ourselves included) have expressed a wish to be able to replay certain extreme challenges, such as Bishop’s “no leveling, all elites” run, we’ve decided to add the option! At Bishop you’ll be able to select these special formats in a list once you completed the original quest(s) where these rules first applied. Next to each special condition you’ll see a mini hiscore list of how far you got (what floor you reached), encouraging you to aim higher next time.

For these special runs you won’t be able to use neither curses nor treats, and the highscore gain remains as if you played the game normally. It’s basically just for fun wacky ways of playing the game, and some of the special modes include:

While some of these could be curses instead/as well, we decided to keep these crazier versions separate as the game isn’t designed to be played this way; you’re basically not really meant to be able to finish the game with one of these adjustments on, and as such we thought it’d be more interesting to give them their own highscore board where you can see how far you got, rather than an arbitrary score increase.

Now, time for a bunch of random stuff! Starting off with a sneak peek at one of the challenge rooms in Tai Ming, dodging the Mimic: 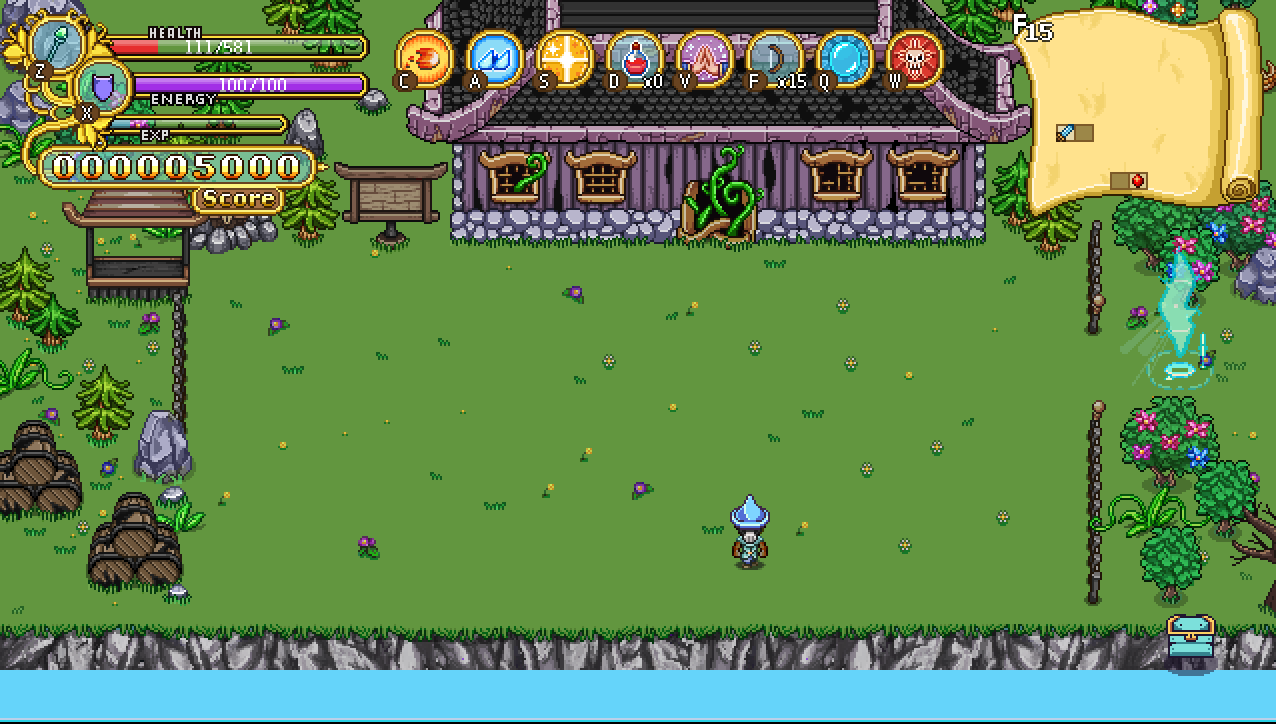 Of course, it’s probably best if he has a platform of his own….: 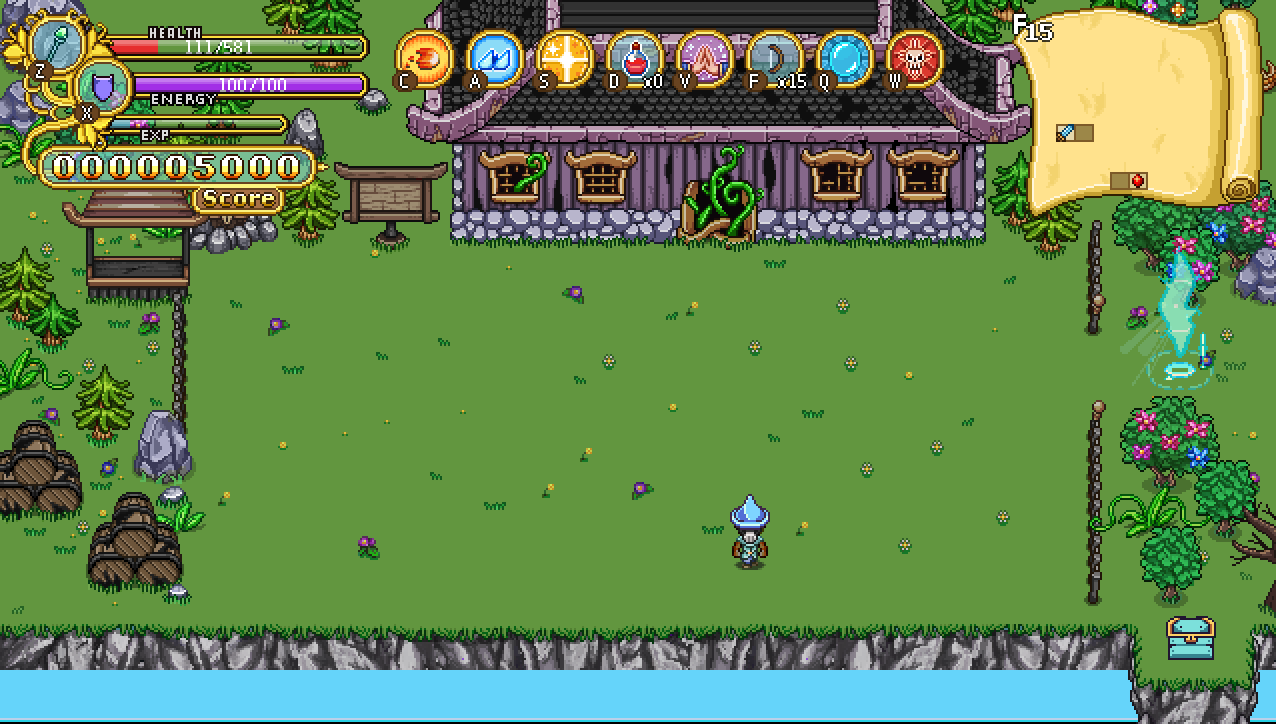 Next, in order to make it more clear what’s going on with Muffin who has his stand all built and ready but isn’t at home in the beginning of a new Arcade game, we added a small signpost (that will be animated), which will let you know where he’s gone if you inspect it:

Playing around with the background of Arcadia, we had two options, either keep it static or introduce parallax scrolling:

Since we all thought the second one looked better, we’re gonna make some adjustments to the background allowing us to properly use parallax scrolling for all the pillars (as well as add some more to increase the effect).

As you might notice at the edge of one of those gifs there are some strange flying fishes near the entrance… And as much as it’d be super cool to have the surrealism of flying fishes in Arcadia, we’ll probably remove these soon! They’re actually just temporary tests where Teddy is trying out their movement patterns:

As you might remember, you’re supposed to be able to change time in Arcadia, at least between day and night. Since no nighttime scenery is complete without a starlit sky, it’s time to make a secondary version of the background:

And this is how it looks as night falls in town:

Finally, a slight adjustment to the Reward box in the game over screen (original version pictured below): 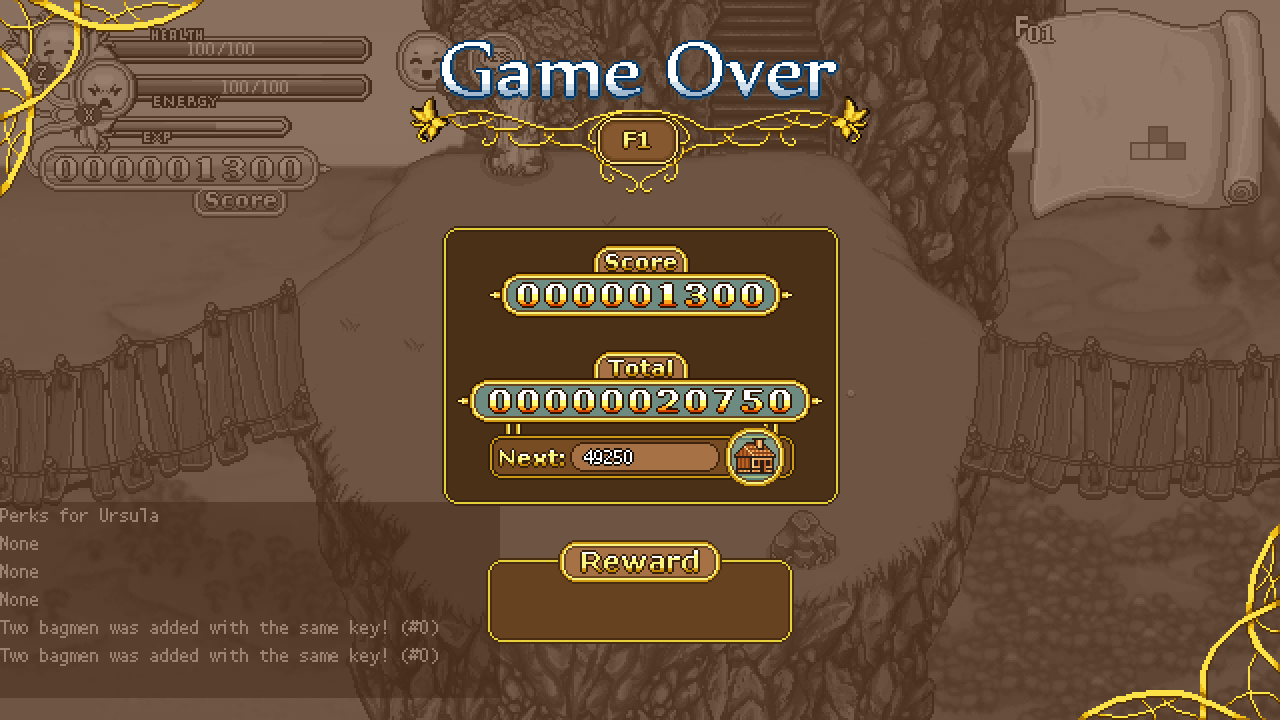 Since you’ll be awarded gold and actually get to keep the gold you’ve collected during your run, it might be a good idea to actually have a spot for the gold to appear in said reward box, which has been added in the version below: 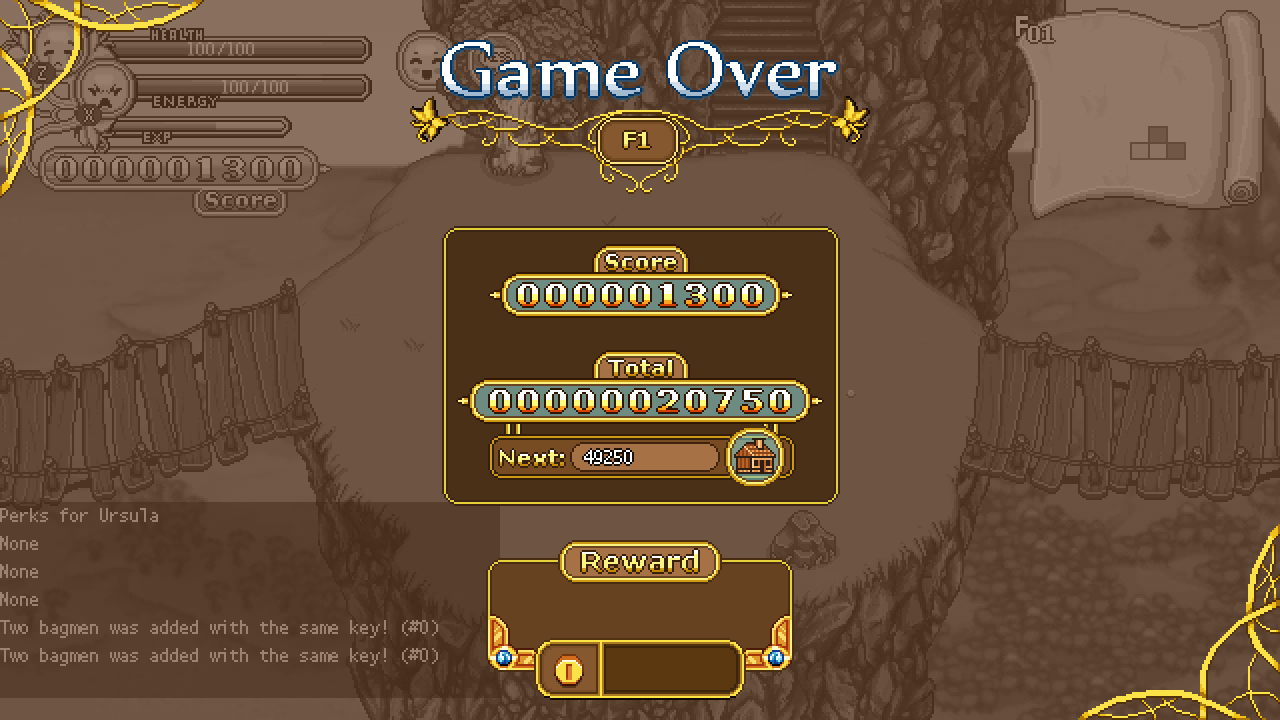 Okay, one of the last interfaces I need to make belongs to Master Ji’s shield training dojo where he challenges you to perfect guard various enemies! Because we haven’t discussed this in detail though, we needed to have a talk and finalize some things.

The basic idea with Master Ji’s dojo is that you won’t be able to deal damage on enemies without having perfect guarded them first: after which they’ll die after just one hit. You yourself on the other hand will just need to take a single hit before losing the challenge!

The first time you talk to Master Ji he’ll give you a trial run where you have to perfect guard twice: once where you hit the enemy regularly after the guard, and once where you’ll use a skill (in order to quickly showcase how your attacks and skills become better by perfect guarding). Once you’ve done this you’ll be able to select a bunch of challenges through his interface.

Each area has their own challenge where you’ll be presented with either one or multiple of the same enemy one at a time until you’ve perfect guarded your way through all the enemies of that area. After that you have to perfect guard against each of the previous enemies at the same time. Complete this without taking damage and you’ll have cleared the challenge. Clear five challenges and you’ll get the first “belt” (a headband of a specific color), ten to get the next and so on (actual numbers might differ depending on how many challenges we have in the final version).

Aside from the basic floor challenges there will also be special challenges with interesting enemies, such as perfect guarding against each of Marino’s special attack combo attacks, or being stuck on a platform with Lantern Jacks shooting fire at you.

As for availability, the relevant challenges will be unlocked as you reach each area, so you’ll have to have gotten to the Evergrind floors in Arcade before you unlock perfect guard training against those enemies, for instance. However, you can clear the challenges in whatever order you want.

In order to make retrying challenges less annoying you’ll get the option to retry (yes/no) after you fail a challenge, where selecting no will simply bring you back to regular Arcadia and yes restarts the challenge.

And now, on to actually making the interface!

Since this place is all about training with your shield, we decided to simply call it “Master Ji’s Shield Training”, and use shields as decoration:

As mentioned before, if you have cleared a challenge, it will get a star on the right side, while if you haven’t unlocked it yet, its icon will remain black and white with a lock on top. In the info box you’ll get information on how to/when you’ll be able to unlock it: 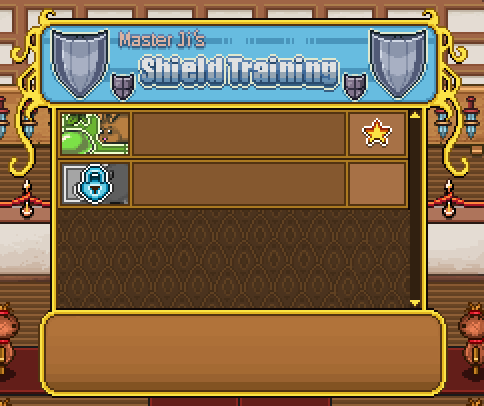 As such, not one but two sets of icons are needed for each challenge, one in color and one black and white: 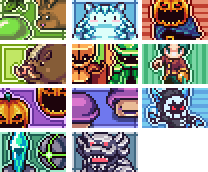 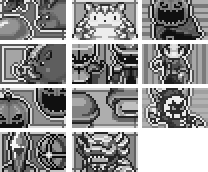 In Fred’s department, this week has been focused on more desert stuff, the place where I will end up very soon as well!

First up, another, new archaeologist with animation:

Another important feature in the desert is the ability to destroy cacti! The cacti will be the main destructible item/container in the desert so naturally there needs to be a bunch of them, animated and all:

There will be a couple additional enemies as well, though these little guys will only appear in a side quest that we’re working on that will be added along with the desert. Seeing how cute they are though, we might wanna squeeze them in somewhere else in the game too, we’ll see! 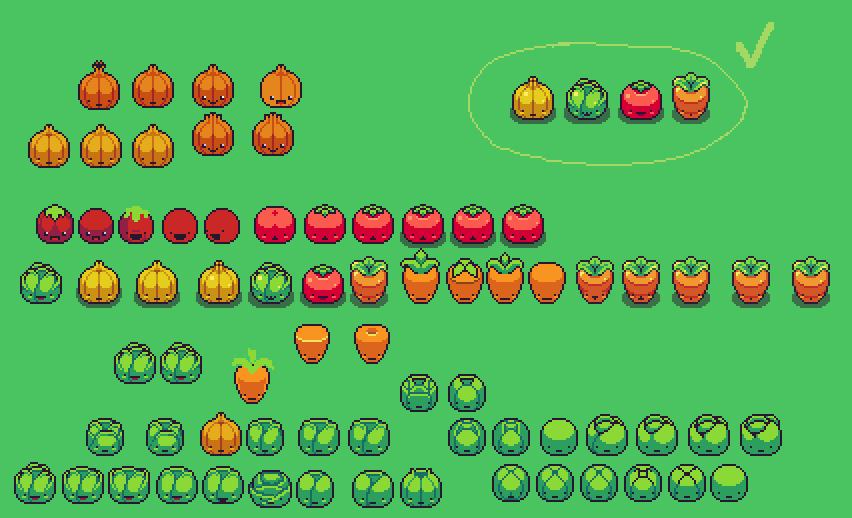 The ones in the top right are the final versions, the rest are various stages of sketches or other variations we decided not to go for. Hope you’re excited to see where you’ll end up meeting this crew!


When will you realize the dessert, the harbour town and the new Acadia?


those 4 veggie monsters would be perfect to place at the barn west of the city after the quest. So we can grind for some unique items we can use for petfood maybe? :)

Any ETA on release date please ?


Game is more and more looking like a complete game as the updates comes. You guys a doing an awesome job!