Time to start (continue) working on the desert for real! Since the sketch is all done, it’s time to start bringing the fourth desert area to life, and we’ll start with the Saloon:

There are still a few things to do with this place, but I feel it’s best to iterate things rather than make the whole thing in one go – the best ideas usually come when you have the basics down and let it rest for a day. Instead, I’ll continue working on the basic skeleton of the area: getting the walls and general decorations down, before continuing adding props on a more detailed level!

For now, here’s what the Saloon looks like right now: 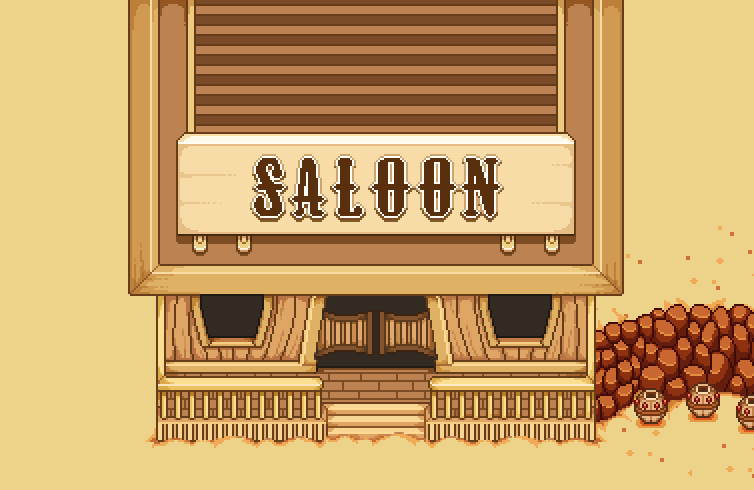 And now, time for the rest of the area! As mentioned, this is best done in several parts, starting with the basics:

The entrance to the harbor town will be in the lower parts of this area, which will be indicated by a wall of sorts, much like the wall around Evergrind City: 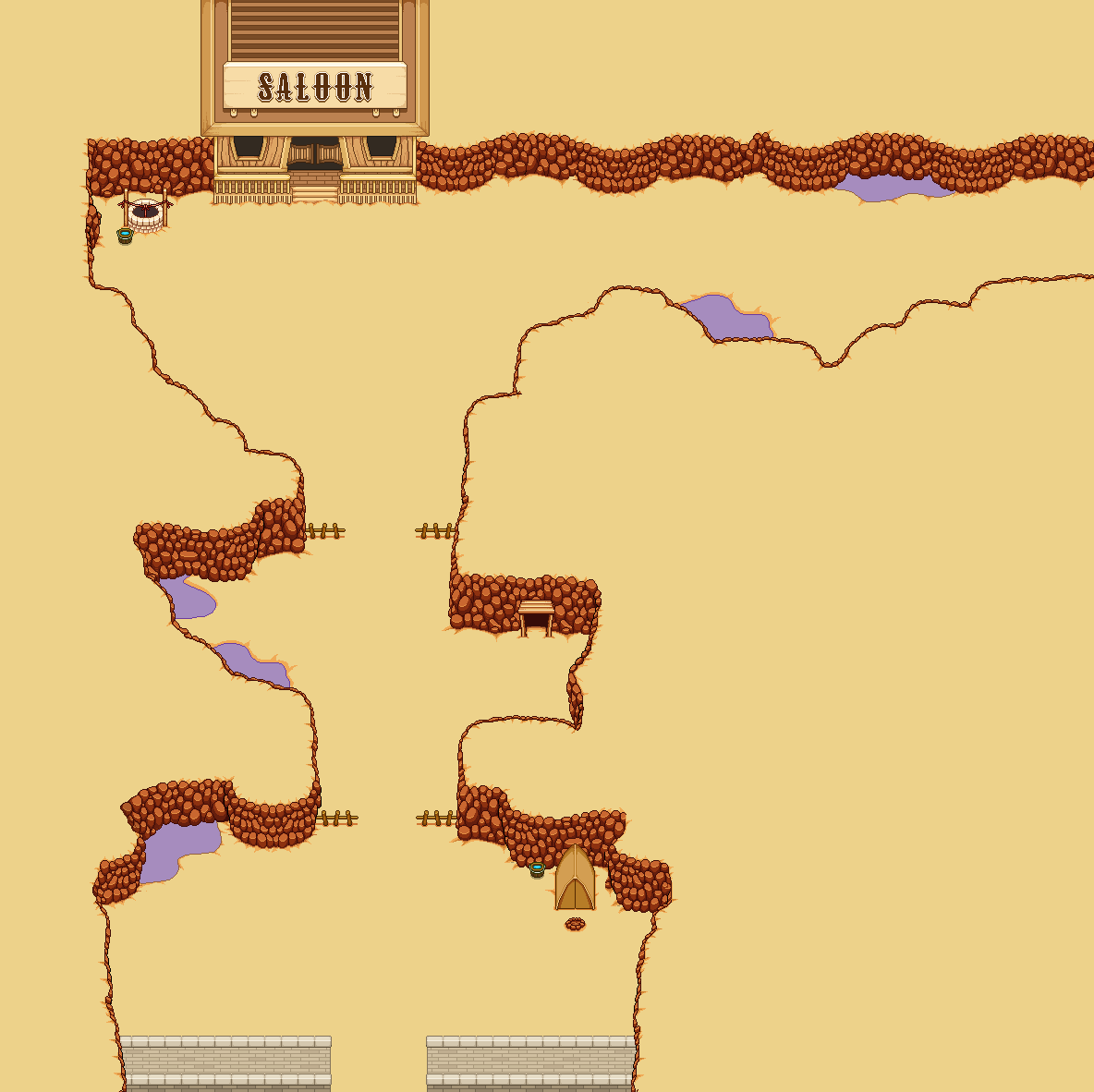 Next up, I’m adding a bunch of props using the editor, mainly cacti and bushes, and then, the path leading to the town and Saloon: 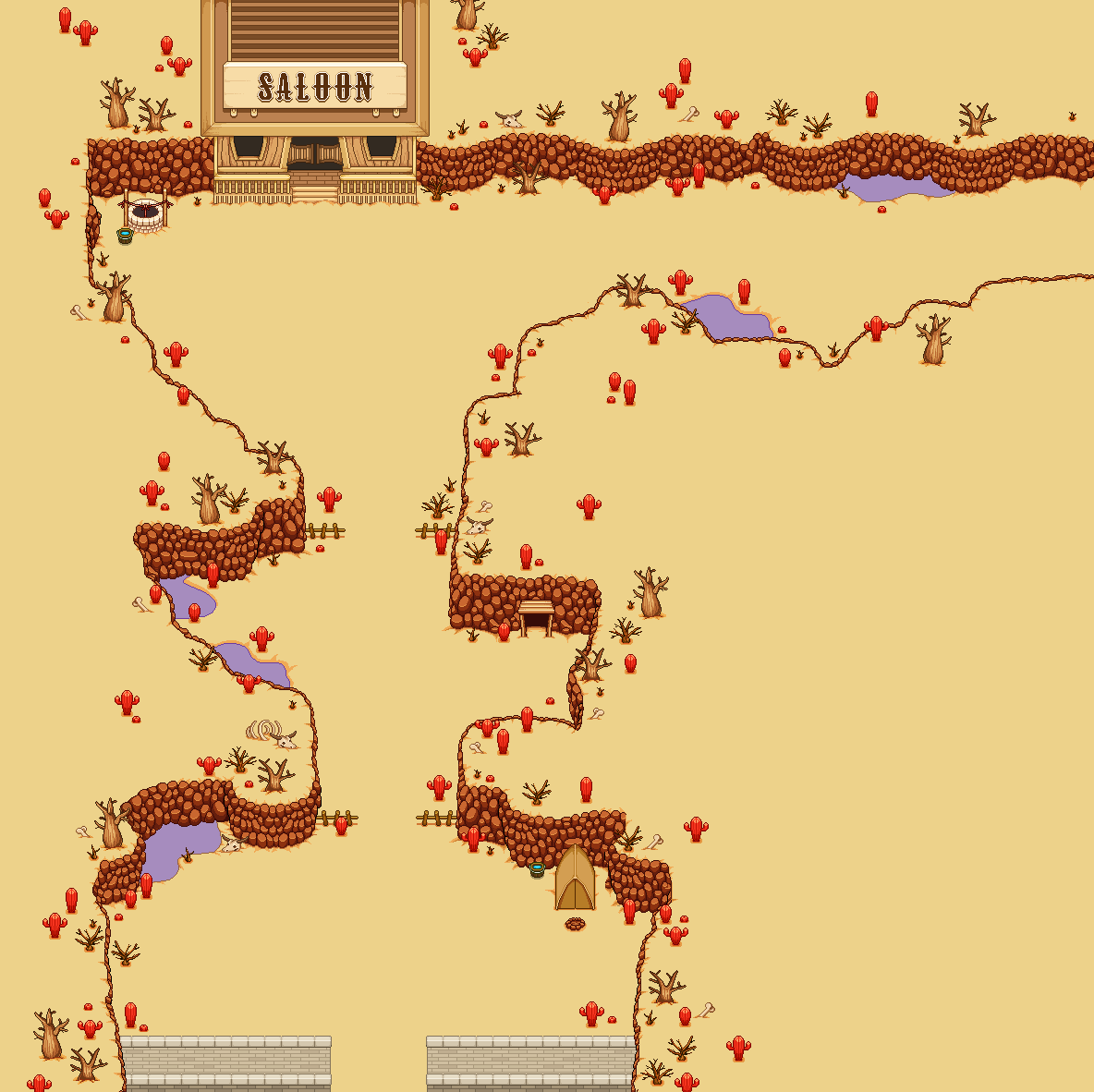 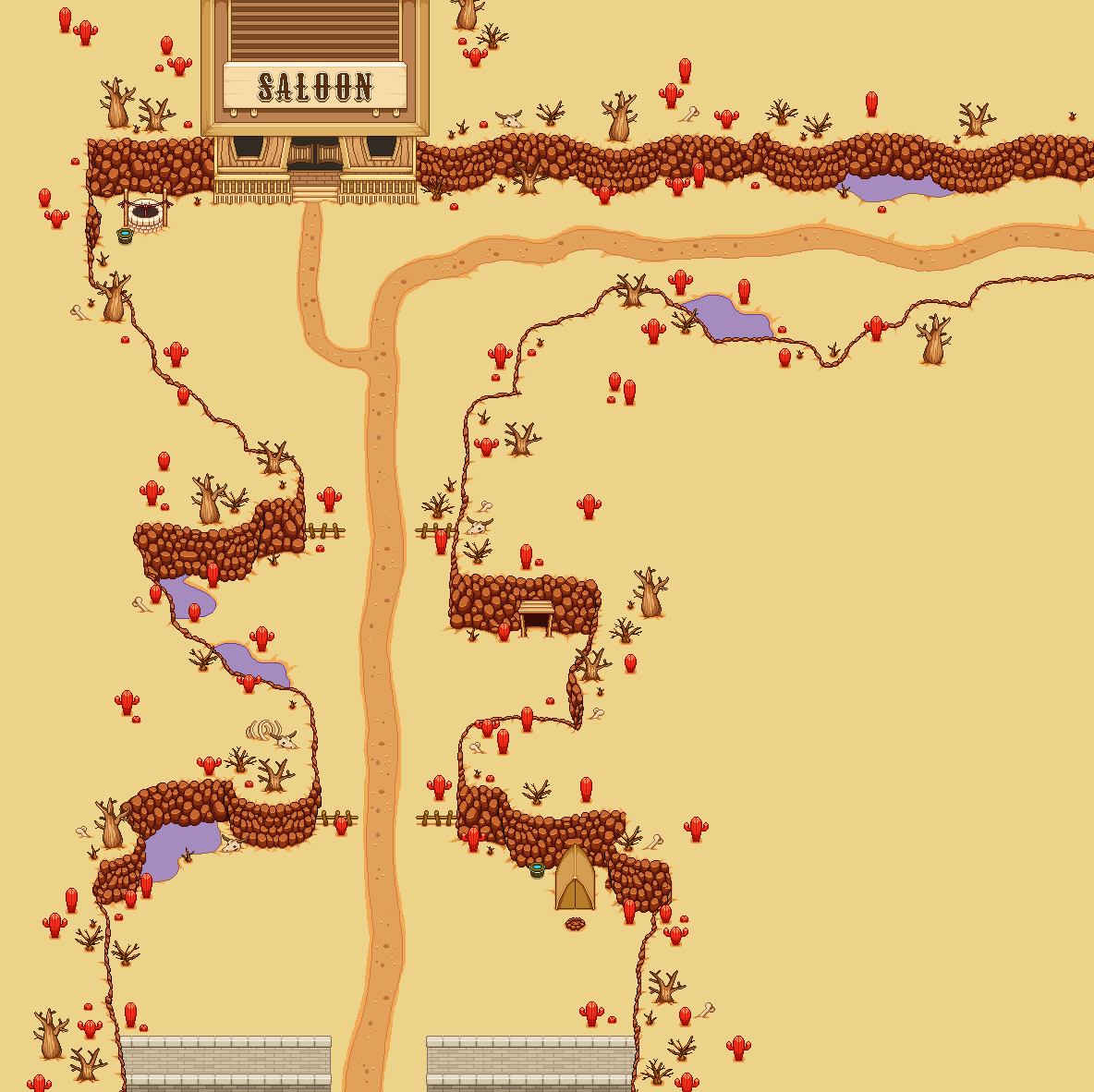 Then, some texture decorations of the sand and a bunch of pots: 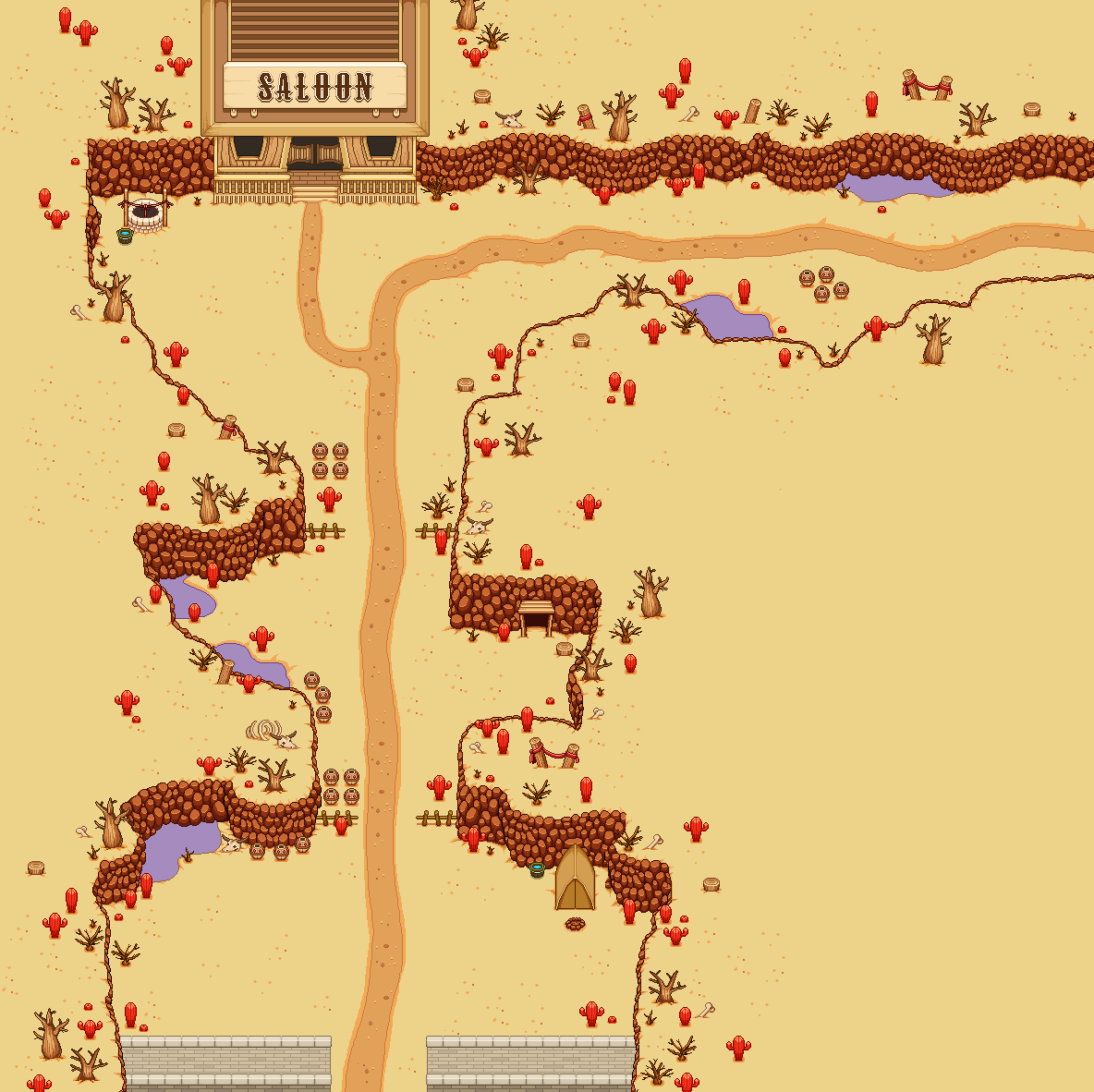 Now it’s time to get down to detail level, adding stuff to give this area a little bit personality. First up, a few wanted posters along the way to the Saloon:

The Saloon will be a hangout for a bunch of shady characters, which will be foreshadowed by the posters above. As for the Saloon itself, there are some details left that I want to get down:

Finally, I’m adding some more stuff to the rest of the area using the editor: crates, barrels, jars, and a few bushes. In the end, here’s the area for now, more or less completed: 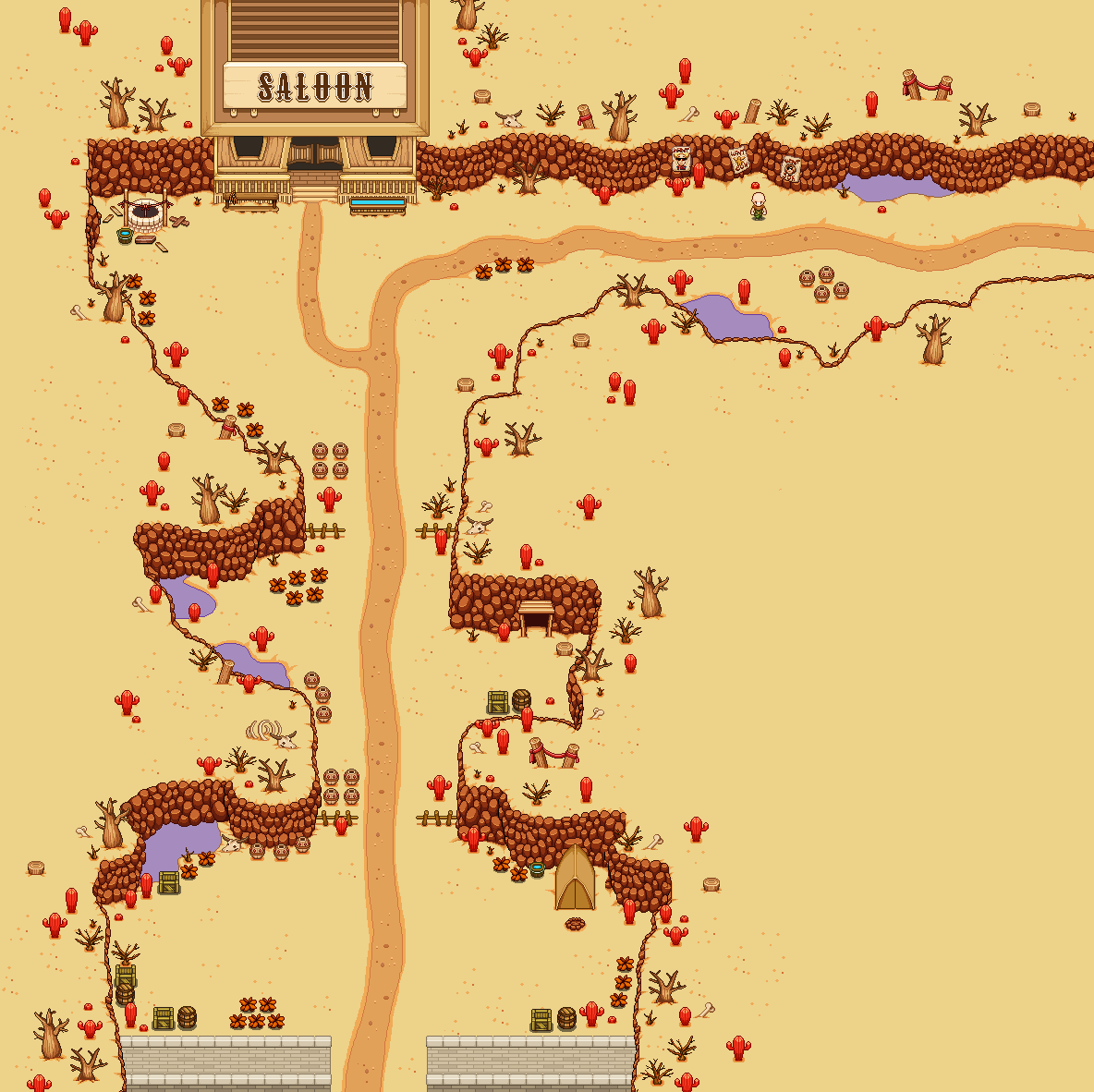 In the portrait area, we’re not done with the archaeologists just yet! Here’s the portrait of another one, the pink haired one shown a few weeks ago:

In Fred’s department, his vegetables are now fully animated, bouncing around ready to be implemented as actual enemies:

And the female gardener from last week gets a husband who’s inside the house stirring.. a pot of water? A bland soup? Who can tell!

What we do know though, is that her father is keeping an eye on him, making sure everything is done correctly:


does this mean arcadia is coming out soon?


I know you guys have endless ideas so I’m just putting this out there…. Tumbleweed-Assasins


@raijin: well, “soon” is a relative word (or maybe it isn’t)! It’s mostly on me (the programmer) right now, to implement the bazillion of new features for the mode. We’re actually very close to have all the new building-related features working (curses, treats, replays, boss training, aquarium, etc).

BUT, then it’s also a matter of some content filling, too, like quests and stuff – one of the main goals of this rework is to make the Arcade Mode feel more personal and alive after all. We might throw what’s there onto Frontline before all new quests and stuff are in, though. As for a timeline, as always I can’t really predict it.

A silver lining with the implementation delays is that Fred and Vilya are working on the desert and port town, so hopefully pushing the story update out won’t take AS long as the same amount of content usually would.