Back to the desert town! Now we’ll move on to making smaller fixes around pretty much everywhere, closing a door to one of the houses we don’t have any particular plans for yet, adding some decorations and making other things blend in better. Also a new version of palm tree!

And here’s where we are right now (except for not having replaced some of the palm trees with version two yet): 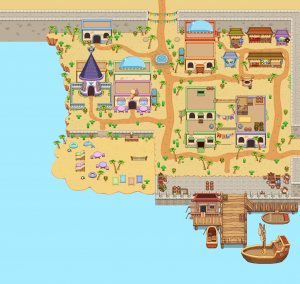 Next step on going over the whole desert map to add details is that ship! Gonna add some more personality to it by adding some small things. And yes, the steering thingy is still not fixed by the end of this video, but it is on our fixlist: 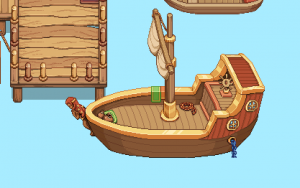 Next stop on the des(s)ert menu (ha!) is finishing up a bunch of smaller places found in or around the town! There are two cave systems, for one, that we need to design, as well as that saloon.

The first cave system is found on the first map of the desert. The room in which you enter is filled with mining equipment – seems that Mt Bloom company has some business in other parts of the lands as well. The cacti in here will have a peculiar, mushroom-like shape. I wonder what significance that will have on any potential side quests in this area? 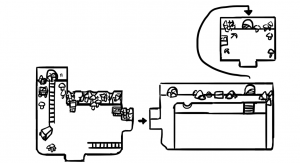 The second cave system is found on the second map of the desert. Much like the first cave system, this too leads to an exit one level above. It also has a dead end sort of deal, but seeing as there’s a jump down thingy leading away from it, maybe it’s possible to reach the other end of this map through some other way… I wonder. ;) 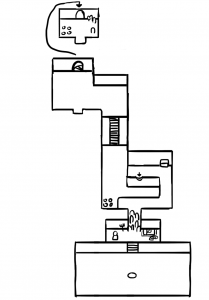 Finally, the Saloon. Fred has already made a bunch of NPCs for this place, so I placed them around the room to get a feel for the place. One of the card player tables will be replaced with the Black Ferret’s table, and there will be a couple of non-occupied slot machines rather than a caveling at each one of them, but you get the idea. We’ve also got plans to put a dancer or two on the small stage next to the bar: 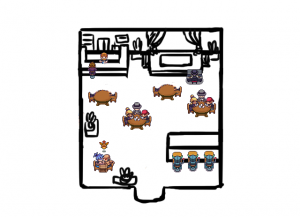 My next mission will be to finish up these areas with, you know, actual graphics. Then there’s one final place to design, but once that’s done Teddy should be able to implement the whole desert area up to the town in one go, without having to wait for more graphics from me and Fred. Of course, there’s usually a bunch of stuff we forget, so it probably won’t go as smoothly as that, but here’s to hoping!

Now, I’m still way behind on portrait creation, so here’s another random guy form the saloon. Drinking the day away (but I’m sure it’s lemonade, so that’s ok, right?):

And with the Arcadia rework drawing ever closer to a finish, I better step up the portrait making speed to keep up with all the characters Fred is making! As such, here’s another one.

I know I’ve mostly been doing GIFs for new portraits but this time my initial reflex was to start recording the whole process so I just went with it! This here is the portrait is of Jar Jar Potter, the resident potter of the desert town:


Hiya! Development is looking phenomenal so far! Would you be able to provide a rough-ish estimate when we can expect the next patch? Steam notes October was the last one; was really hoping to have a rough idea when you guys would be releasing the next patch- I’d really like to buy it but hesitate because while everything looks fantastic as is, I’d like to know about when the next update will be released to better determine when to purchase. Thanks in advance and keep up the great work!