Now that we’re done with the Arcadia rework for now, things are happening fast in terms of the desert enemies! Teddy has been making a ton of prototyping and it’s now possible for us to play around with the basic enemy compositions.

First, here’s a very early look of the Cacute enemy, jumping around, minding its own business:

As mentioned before, our plan for these guys is that they won’t focus on the player in particular, but will be dangerous just by existing – as you can see, they launch a bunch of needles with each jump!

The new slime and bird enemies have been added as well, the slime becoming a saw Giga-Slime style as it attacks, while the bird is pretty much an egg-laying bee!

In order to mix this up a bit, we’re playing around with having the bird lay eggs closer to the ground, so you can actually hit it while it lays them. Our original idea was to have each egg spawn another bird unless you break it in time, but we’re also playing around with having it lay different kinds of eggs, each with a hazard of its own. However, it might end up too similar to the mimic which you just fought, so we might play around with some other ideas as well.

We’ll need to play around with it a bit more before we know exactly how these will work in the end. Also, the Solem has not been made yet, and it might mix things up a lot once it joins these compositions!

The first portrait this week is that of one of the ice cream sellers shown last week! She owns the shop with her fiancé, and we have some plans to include these in a quest featuring another duo interested in sweets… Actually making that quest will probably wait ’til the rest of the desert and the quests we planned earlier are finished, though :)

The second ice cream seller is the fiancé of the previous one! I’m sure he’s happy to be able to own such a sweet (ha) business with the love of his life – who wouldn’t be?!

Right now we haven’t decided on any actual use for the ice creams, though it would certainly be fun to be able to buy some. Feel free to share any ideas you might have on potential uses for them! Is there a consumable type you feel is missing? Want more pet food? Let’s hear your ideas!

What I’ve done here is I’ve played around with walls and floor textures, and made some basic decorative things. I’m not 100% sure about the colors yet, I might tint them a bit yellow to make sure they fit the overall desert aesthetics, but once that’s done I’m ready to use these things as a base for the remaining interiors I need to make.

The desert ruins aren’t huge – only 2 (rather big) rooms are planned, but I wanted to make sure they feel special, hence the extra effort spent on getting a feel for it. 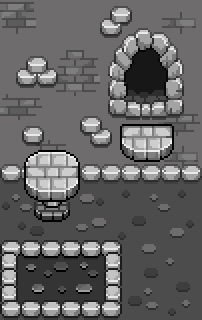 In Freds department, the NPCs and their animations continue to be made! First, we have the author:

When we’re done with the rest of story mode, we actually have plans to add her to the library in Evergrind City early in the game, when she’s there temporarily for a signing. We’d like to tie together the whole world of Grindea, and having her (and maybe one or two other desert characters) appear in Evergrind early in the game is a step to make the player feel recognition when you run into them later in the game.

Next up, an animation for the forgotten farmer, living in the depths of the caves beneath the desert (more to come):

Finally, the most exciting news…. The very first sketches of the Captain, who will be the boss in the next dungeon: the ghost ship. We have a really cool idea for this dungeon, and this guy plays a key part in it… Stay tuned for more!! 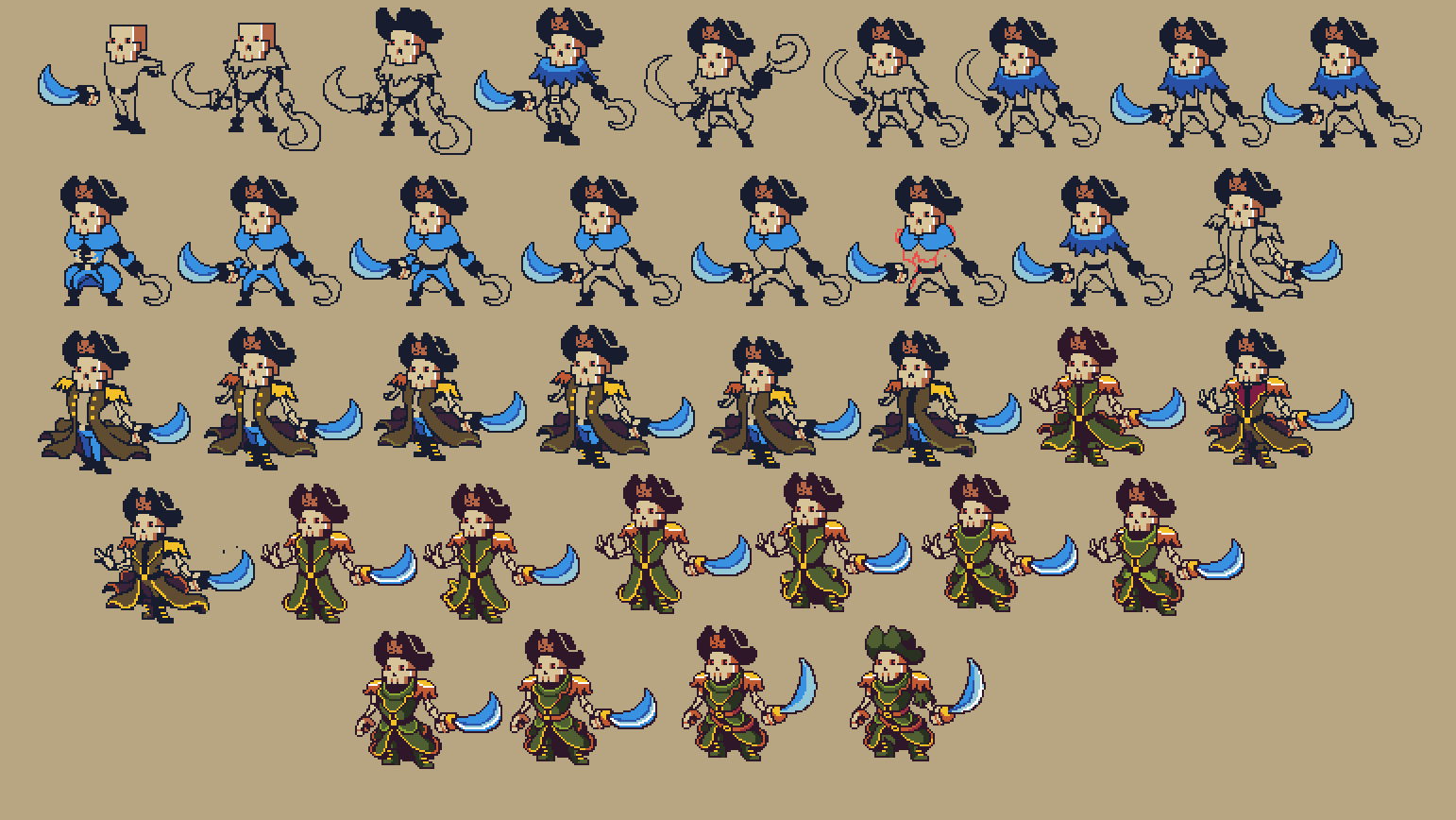