This week we’ve finally started planning the next dungeon in more detail! As mentioned previously, the final dungeon will be a ghost ship, with a skill that allows you to enter the spirit world, where you can see (and interact with) things you don’t normally see…

As most of you are probably aware by now, this blog is full of spoilers, but I thought I’d make another spoiler warning for the remainder of this post, as I’ll be going into more detail than usual.

So, what we’ve talked about recently is the main design on the dungeon, how things will start out once you enter the ship, and some of the mechanics we’re looking into using here.

To begin with, we’ll be adding another character that will make its first appearance earlier in the story than we are currently. While we’re not super excited to go back in time and add characters, hints and other things in areas most of you have likely played through already, I’m afraid it’s unavoidable when working on a game like this, chapter by chapter. We’d have to be geniuses or have thought out the game in much more specific detail before beginning any area to avoid this completely – and often you don’t realize what’s missing until you’ve had enough feedback from beta testers (or when it comes to story elements I guess you guys are more like beta readers). We already know we’ll add a bunch of extra scenes in the beginning to flesh out the story and relationships slightly, before the game is done. This will just be one more thing like that. Hopefully, this will give you all an incentive to play through the game once more at release, when all these additions and small changes are in place, to experience the story as we intend it to be experienced – in one go with all the proper story elements there from the beginning!

Anyway!! The character we’ll be adding is another scientist hanging out with Dad and the other scientists in the HQ lab. This character, however, will be focused on researching the spirit world, whether it truly exists, and how one would interact with it. Sometime into the story, he will have heard rumors of a ghost ship and will take off to investigate…

So, as you enter said ghost ship, you’ll meet with a flying weapon and someone hurling curses at you that you can’t see. Well, that’s a bit of a problem! Ignoring this threat, you continue onwards, battle some of our new enemies (more on those later), see a locked door, and eventually run into the scientist who will give you his spirit world machine that allows you to enter and interact with the spirits haunting the ship.

The gimmick of the ship will be to enter and exit the spirit world in order to solve puzzles and defeat enemies. Some enemies you’ll only be able to damage in the spirit world, but entering the spirit world will allow them to attack you with more attacks and deal more damage, as well. There will be enemies harassing you in the regular world, too, of course – so nowhere’s truly safe, but each world will have their own challenges. We’ll have our work cut out for us in making sure there is balance between the two and none you just stick to the entire dungeon. One of our ideas for this is having a meter limiting how long you can spend in the spirit world, since that’s the place you’ll be able to get rid of most of the enemies – and it’s a mechanic that helps increase the stakes in certain puzzles, when you can’t spend unlimited time solving them.

There’s a lot more discussion to be had, but for now I feel we have a good grasp on the early stages of the dungeon! For now, onwards with the desert and that final part of the desert ruins! This time we get into the details, adding those small things that tie everything together:

As you might have guessed, there will be a puzzle of some sort in the middle. While we know approximately what this will look like, we haven’t ironed out the specifics yet so for now it will remain empty.

Aside from that, here’s what it looks like in its completed state: 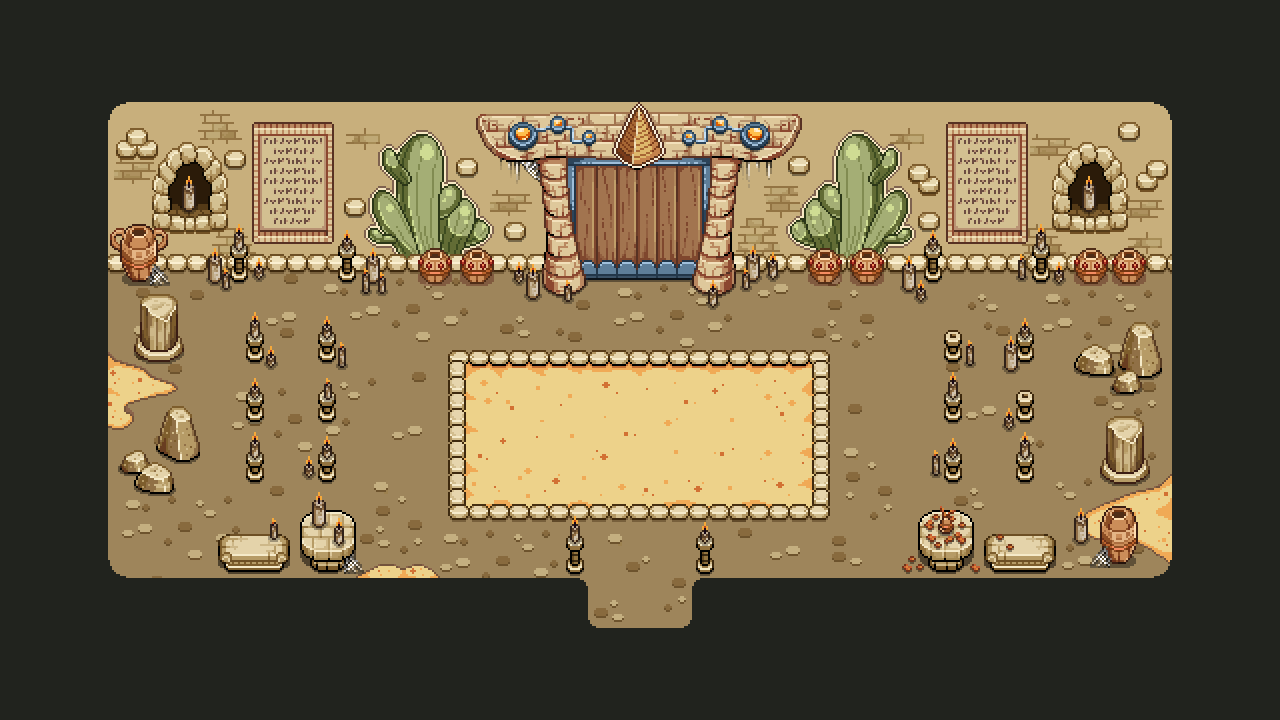 Since I’m finally running low on portraits to make, this week there will be just one! This guy is another oldtimer, made by Fred quite a while ago. He’s a gangster – or at least a gangster looking kind of guy (actually, you know, maybe he just likes to wear a suit.. who am I to judge?) – who hangs out in the saloon, playing cards:

You’d think we’d be finished with the desert graphics soon, but oh no, now that things are finally started to get implemented, there are a ton of edits that needs to be made – some things you just don’t realize need fixing before they have been properly added to the engine…

First up, we have the exterior of the desert ruin. Now that the ruins will be slightly bigger than we first though, we felt it needed to look just a little bigger on the outside too: 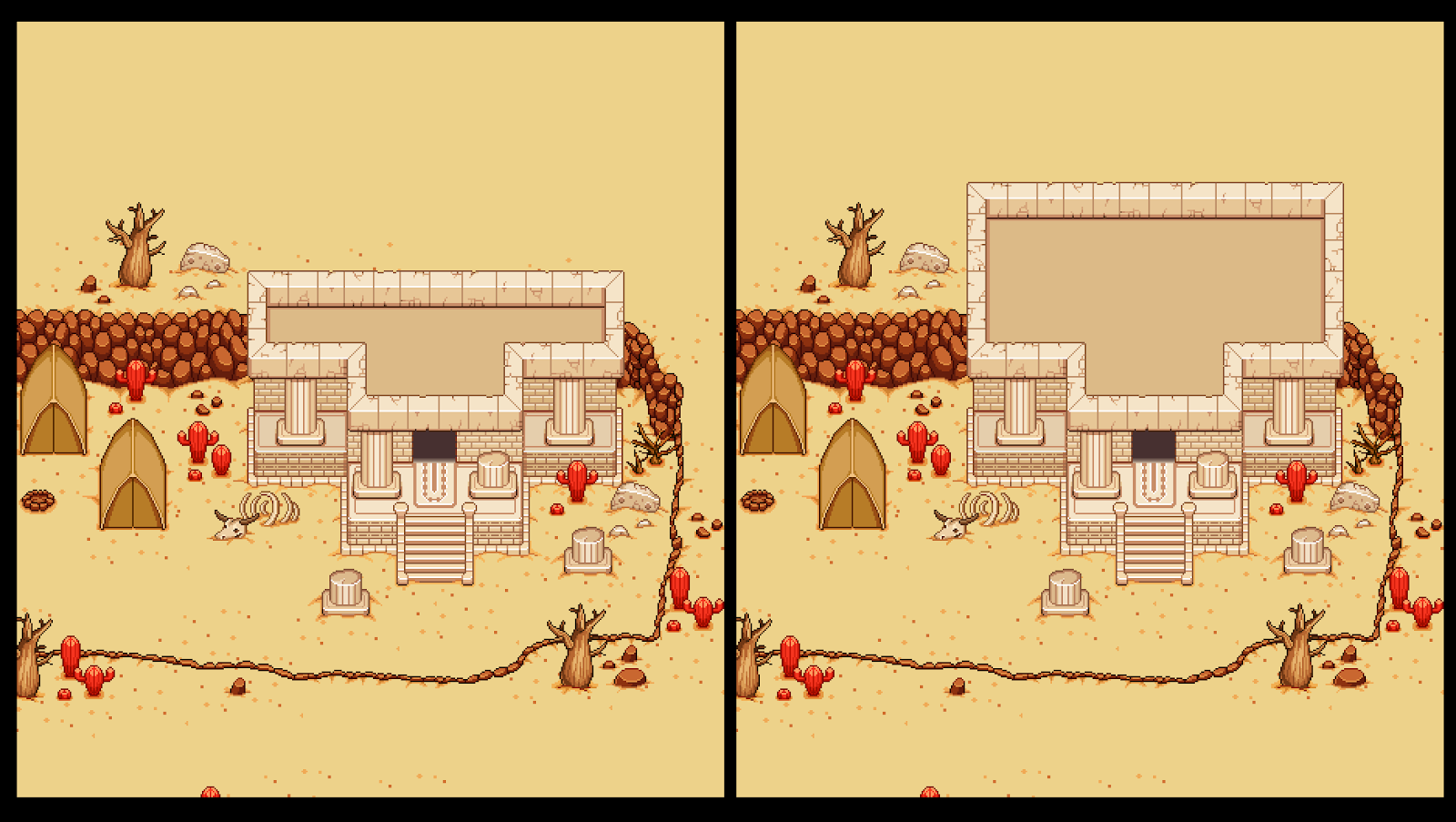 Then we have this area, which never got finished in the first place:

Earlier we actually thought we’d have some sort of desert storm challenge there, where you’d have to navigate your way through a desert storm, barely able to see anything. Since we didn’t have the details or layout for that ironed out yet, I just left that part of the desert empty. Since then, we changed things around and put the map with the saloon to the left instead, so now it was simply time to complete the map.

We’ve also decided to add a cave right before the season orb below, to give you a bit more of a challenge other than simply walking around to hit it (it will come as no surprise that you need to hit it to get across to the other side):

In this cave we’ll have a new type of puzzle, one we’re actually quite excited about! This one will be all about math, having you step on plates to make up a number shown inside the cave. Basic sketch below: 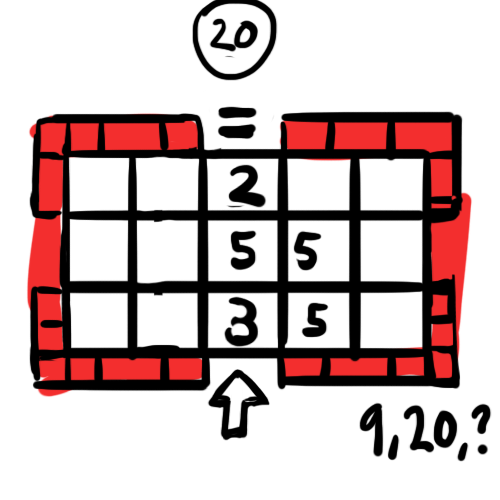 We plan on having three puzzles like this inside the cave, of varying difficulty (one will likely have 9 plates, another 20). One will also feature plates with enemies on them, which means you’ll essentially build your own encounter once you step out of the plates. Fun times!

Meanwhile, Fred has been working on the desert enemies. Here’s a zoomed in version of those birds that will attack you after hatching out of eggs, cause it’s simply too cute to pass up on showing:

We’ve also been working on the Solem laser! It’s now a lot brighter and more intense, clearly showing the difference between simply aiming and actually attacking you:

Fred has also been working on the puzzle plates we’ll use in those math puzzles mentioned. Here you can see the enemy plates as well, so cute: 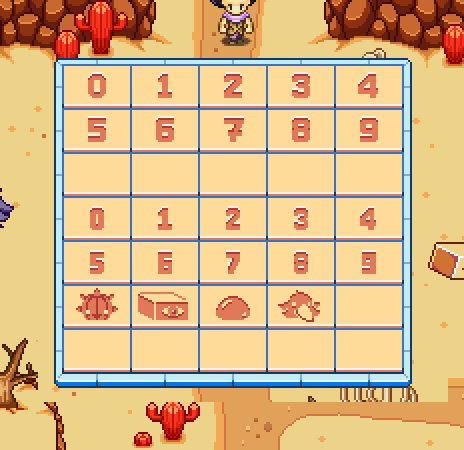 In the end, it’s likely we’ll adjust the colors of this – but for now this is the basic idea of what they’ll look like!


@Originalname: Thanks for exposing the doppelganger :D