Aaaand we return, slightly more well rested and ready to get back into the action!

Now that the desert and desert town is in place, it’s time to update the world map into a somewhat final version (there’s still the ghost ship remaining, but I’ll easily be able to add that later, as it’s in the midst of the water anyways)!!

So basically, this is what the world map will look like after you’ve visited all of the areas (except the ghost ship): 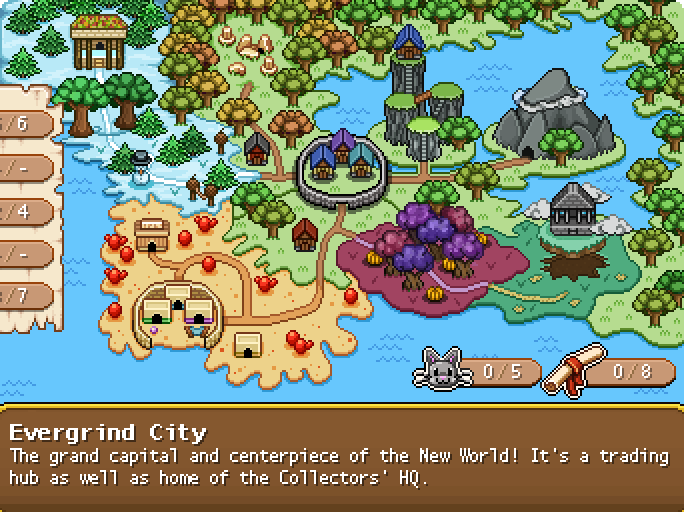 So exciting! Only one more little ship to add, and then it’s all done. I’ve reworked the shadows that covers each area before you’ve explored it slightly as well, so you’ll notice things will look a bit different once this has been implemented. There will be 12 pieces to uncover in total, once the ghost ship has been added (13 if you count Tai Ming – but the Tai Ming piece of the map isn’t visible at all until you’ve actually been there). Right now I think there are a couple more than that since we wanted to make sure we had space for the areas we hadn’t designed yet, and their shapes look a little random. The water will be visible from the start, giving the map some more color from the beginning, as well.

Exciting times! This actually feels like such a huge milestone, even if the ghost ship is missing. I mean, even if the ship is missing – it looks complete on a whole different level compared to before. It’s been a long journey, but you can finally start to see it all coming together!

Speaking of the ghost ship, we’ve been making a ton of prototypes for various challenges and mechanics we’d like to include. First we have a challenge where you need to go between various platforms, and the only way of doing so is entering the spirit world. Only problem is, there’s an angry ghost attacking you if you enter his domain – so you can’t stay too long or you’ll take guaranteed damage.

We’re currently considering whether you’ll fall down if you leave the spirit world in the midst of a bridge. The other idea would be that you simply can’t leave until you’re on solid ground.

Next, a variation on the same theme. Here we have a prototype where you battle enemies in the ‘real’ world, in which you do less damage than you normally would on a similar enemy. Entering the spirit world, you do full damage, but you also get chased by the angry ghost from before! Decisions, decisions…

Finally, and old classic we’d like to include somehow: the good old phase shift puzzle – ghost version. Here, you need to swap between the spirit world and normal world on the fly (ha!), in order to make your way across.

As for the overall design of the place, we’ve decided on dividing the ship in three parts. The first part will be where you first meet the ghost captain, and where you’ll get the skill that allows you to enter the spirit world. This part of the ship will be mostly storage, so there will be rooms with lots of crates, barrels, buckets and other kinds of storage. The ship will have had lots of cool cargo, so hopefully we’ll be able to make this part look interesting.

The second part (and second floor) will house the living quarters for the sailors that ran the ship. Here we’ll have their sleeping quarters (great halls with many beds), a kitchen, dining hall, and such. There might also be one or two optional friendly ghosts here, who might give you a quest or two.

On the third floor will be a more luxe area: here they’ll have a grand entertainment hall with a bar and ghastly piano playing by itself, there will be huts for high paying passengers, and finally, the path to the captains own room… 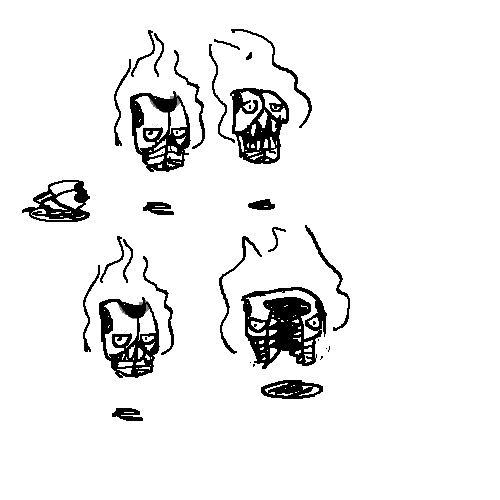 We’ve also talked about adding another type of “enemy” (sketched above), which you actually won’t be able to kill! These things are in fact armors that were part of a shipment, which have now been possessed. So long as you’re in the regular world, they’ll just lie on the floor blocking your way – but once you enter the spirit world, the armors will come to life and float in to the air towards you. If they get too close, they’ll attack, but you won’t be able to damage them back. Instead, your only option is to leave the spirit world and have them fall back unto the ground – a mechanic that might also be helpful in certain puzzles…

Now, over to something else, such as this week’s portrait! This time it features the pianist, a guy who, as you may have guessed, plays the piano (in the saloon, the be specific). Since he’s in the saloon I went with the theme and made him sort of buff looking. Otherwise not much else to say about this guy for now!

In the animation department, Fred continues with the desert stuff and has made a really cool death animation for the Solem, which kind of gets frozen in place before it disintegrates:

There’s also a lovely little salamander in progress, which we want running around the place here and there, as a purely decorative detail. Here’s a bunch of suggestions he made, with the one we ended up choosing the the red circle: 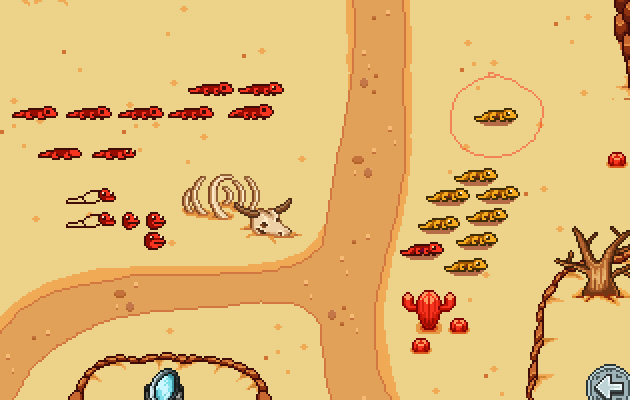 And of course, it needs a few animations as well, so here’s one where it’s sticking its tongue out, one where it runs off, and one where it escapes by digging its way into the sand – how cute!

Teddy has been hard at work implementing all of Fred’s NPCs, too, and for the fun of it he decided to put most of them in one screen, just to see what it’d look like. Have a peek:

And with that, back to work! See you next time~


btw Salamanders wouldn’t be in the desert. Some kind of lizard, though