Next up, we have another boss portrait! This one of course featuring the Solem boss you’ll face off against inside the ruins:

Since he has a gem for a face, we thought what better name for this swell guy, than Sol-Gem? Said and done: 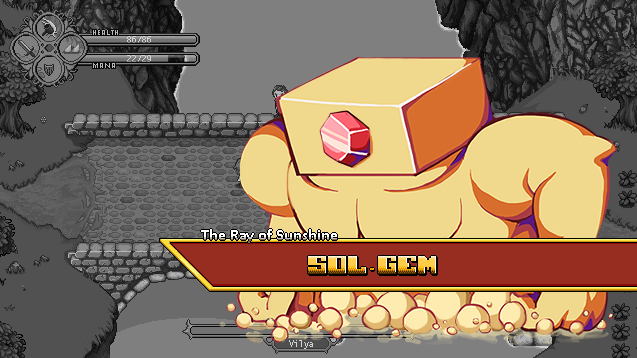 As always, there’s a ton of minor things to add and adjust right before an update, so here’s a very mixed set of things, starting with two new expressions for one of the characters in town:

A slight edit of the first desert ruin room, where we’ve removed one of the scriptures for a small note on the wall, carved by some ancient apprentice: 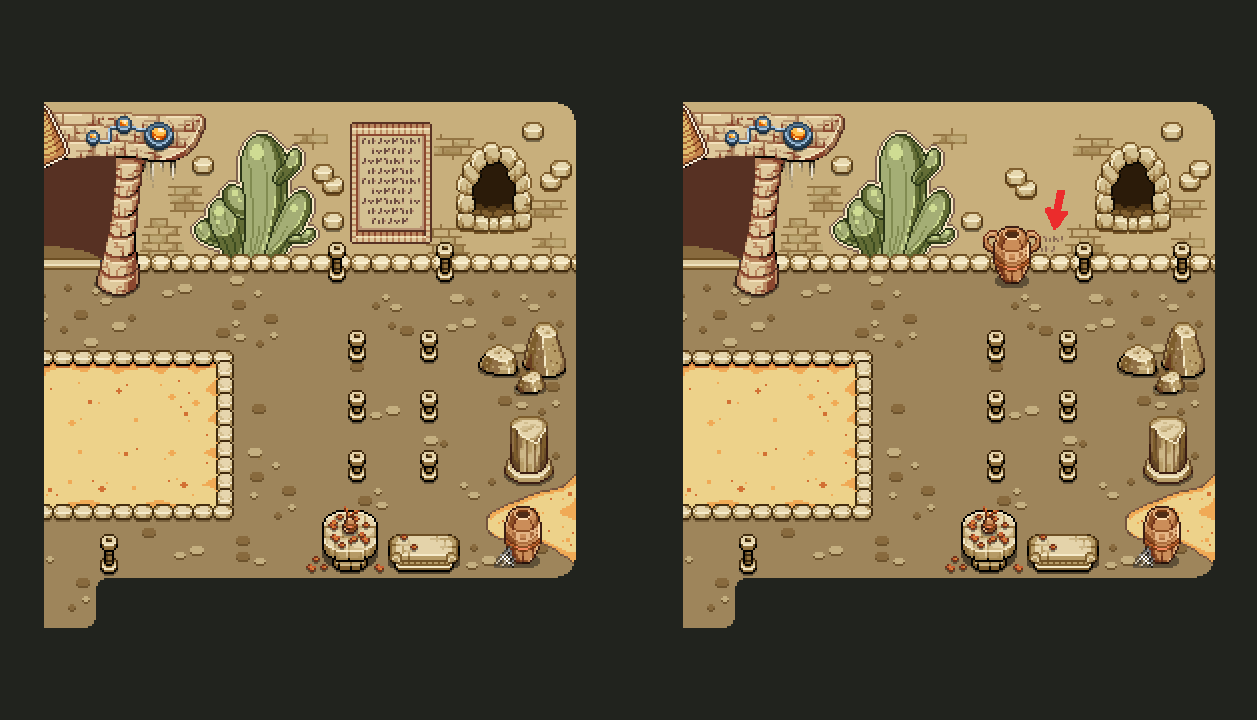 In the second room of the ruins, we’ve moved down the altar for the gem so there’s enough room for the giant rock to appear behind it, as well as a more broken version of the arc that will replace the previous one once the rock has rolled into it: 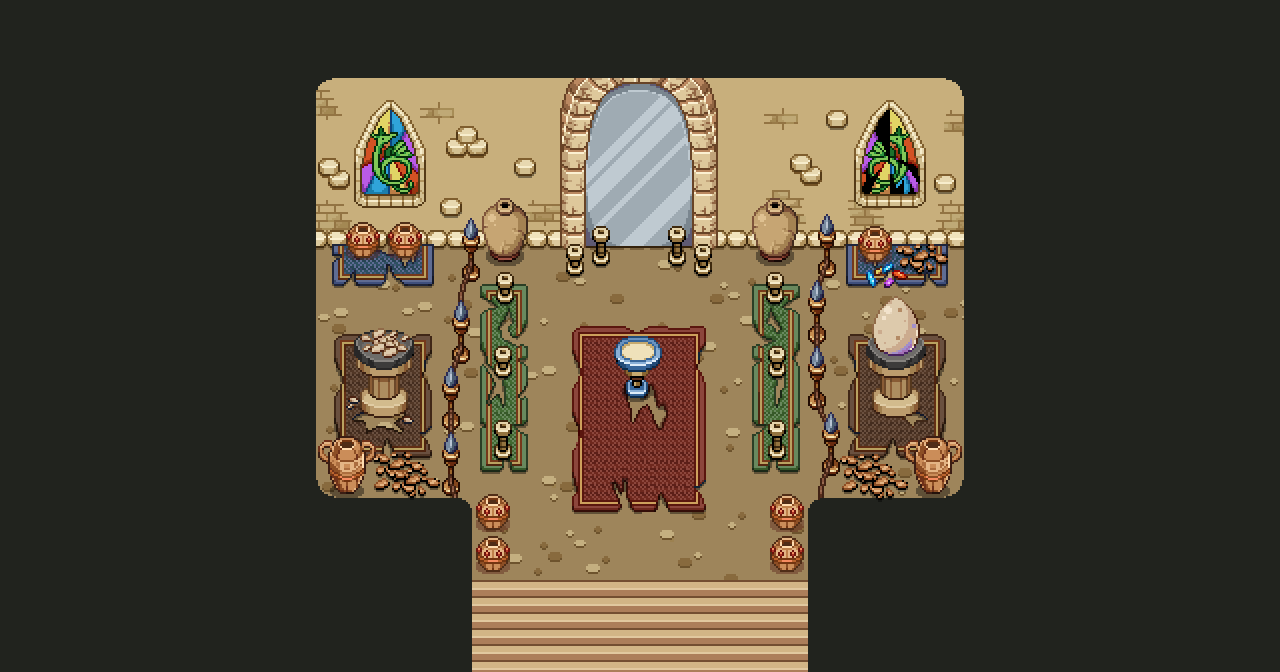 The scriptures around the desert have gotten some upgrades too (or should I say downgrades), since we didn’t want the text to be readable we’ve decided to make them look torn and broken enough to justify the text not being legible: 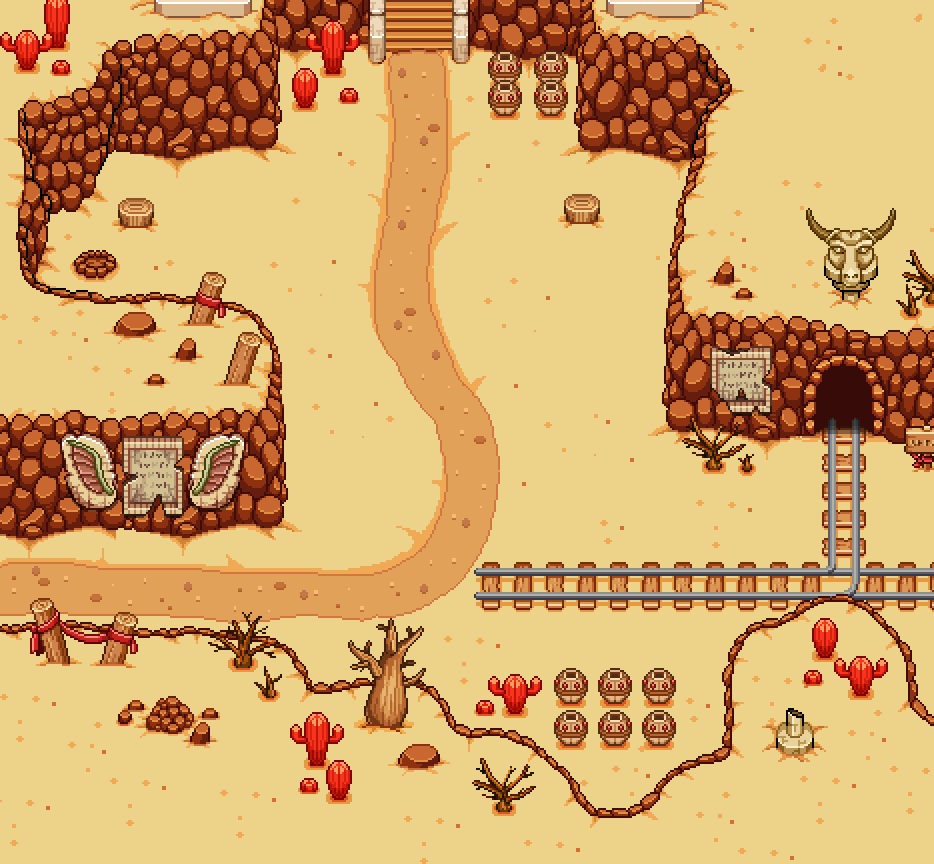 In the math puzzle cave, I also went ahead and added those number wizard statues I mentioned before, and have since decided to upgrade the look and feel of the first cave slightly as well (more on that later): 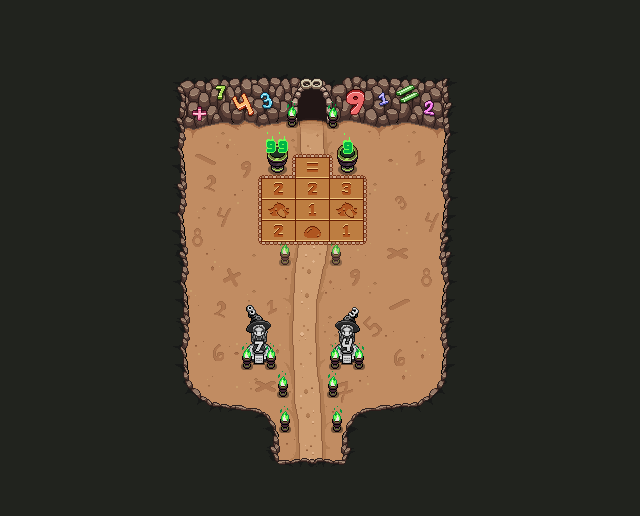 Now we have this week’s portrait, which features a giant of a man who works in the desert mine. His name is Big Brutus, and I have a feeling he’s not someone you want to mess around with:

Now, for those math puzzles… First up, I’ve made the other two caves in this system, which was pretty straight forward after everything was completed in the first cave: 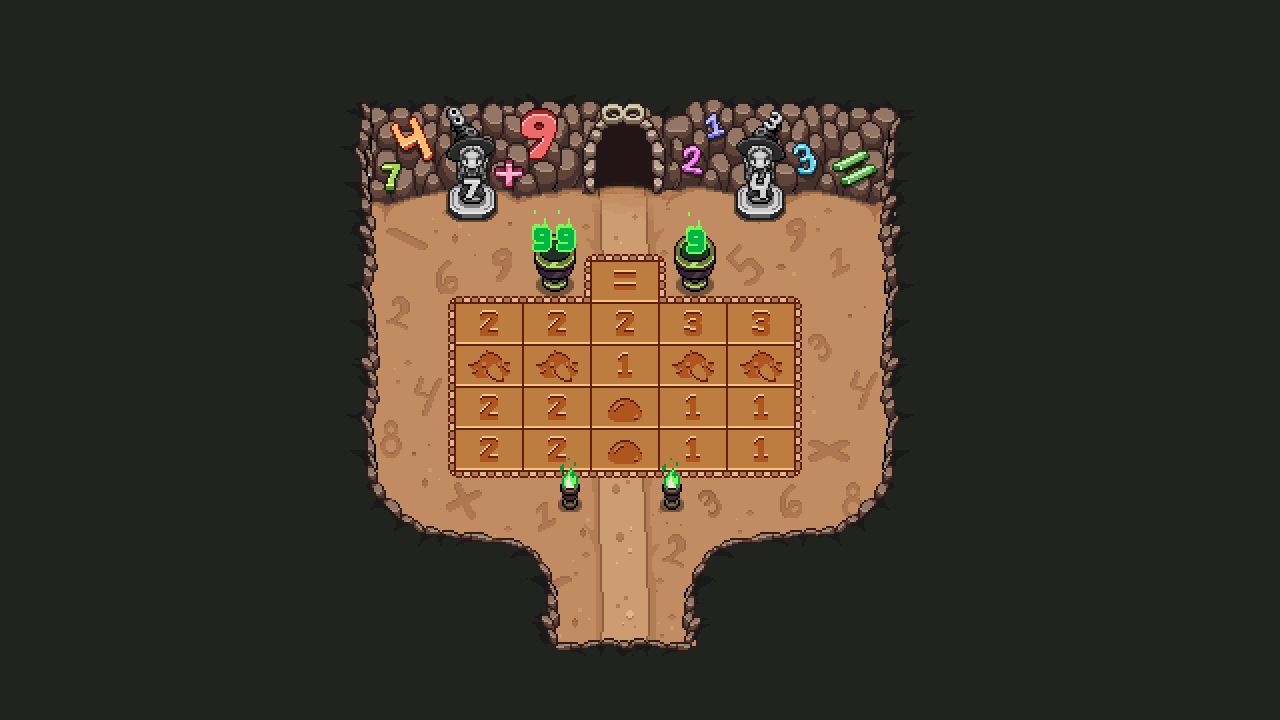 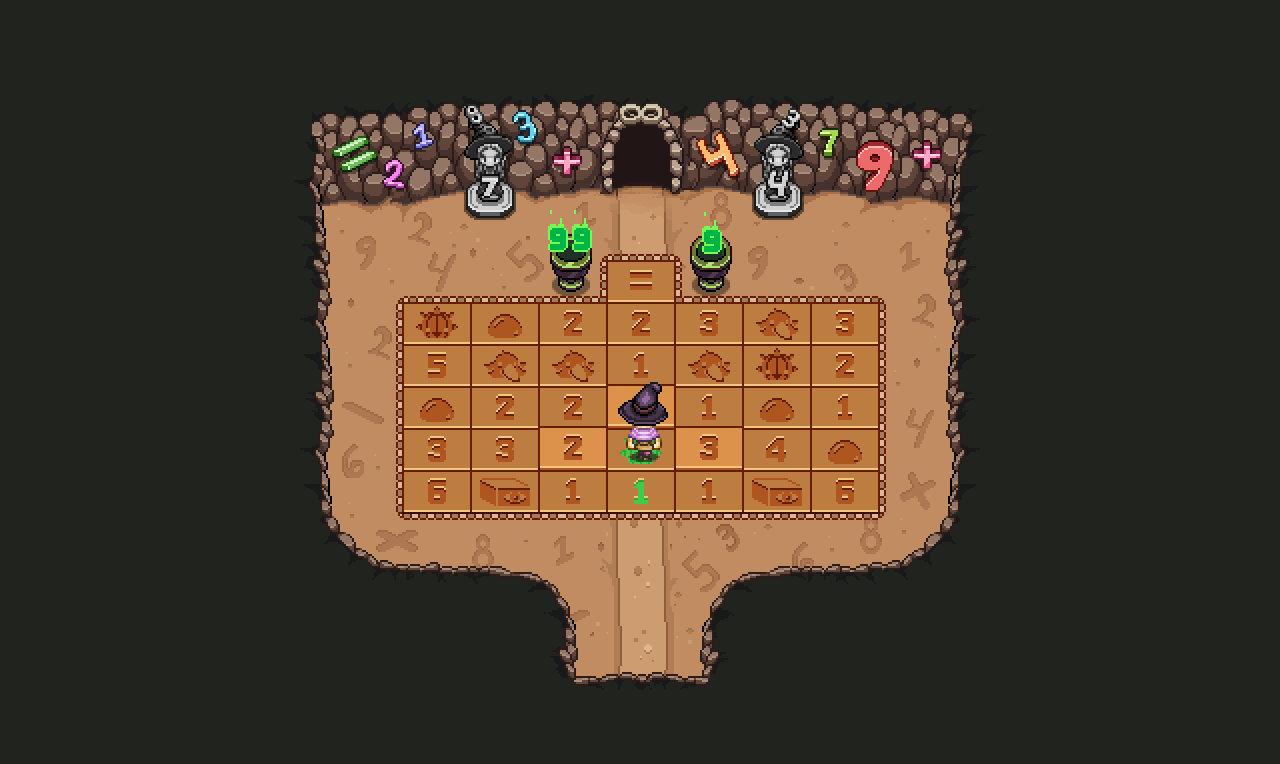 But then I thought the first one looks just too simple, especially when there’s so much sand in it, so I decided to mix things up and make a slightly more interesting background for this one. So here we have the process:

And the final version of the first room, yay: 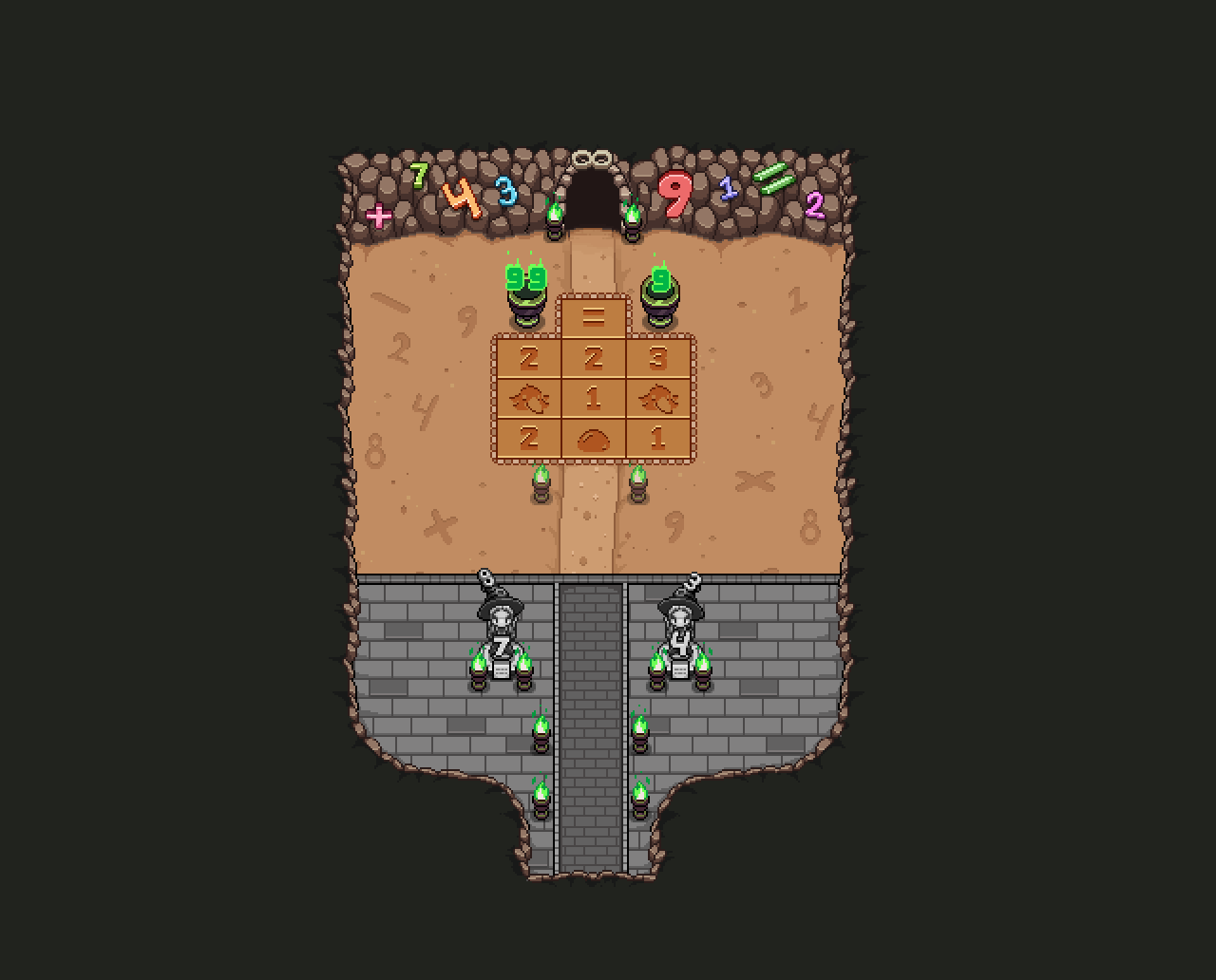 Alright, so there was one thing remaining to do in the desert ruins, and as most of the things have been implemented by now, it’s time to get going with these puzzle blocks!

These blocks are special in the sense that you need to place them correctly according to a creation myth found within the temple, so instead of just regular blocks, they have a slightly more interesting look:

And here’s the final blocks by the end of the video: 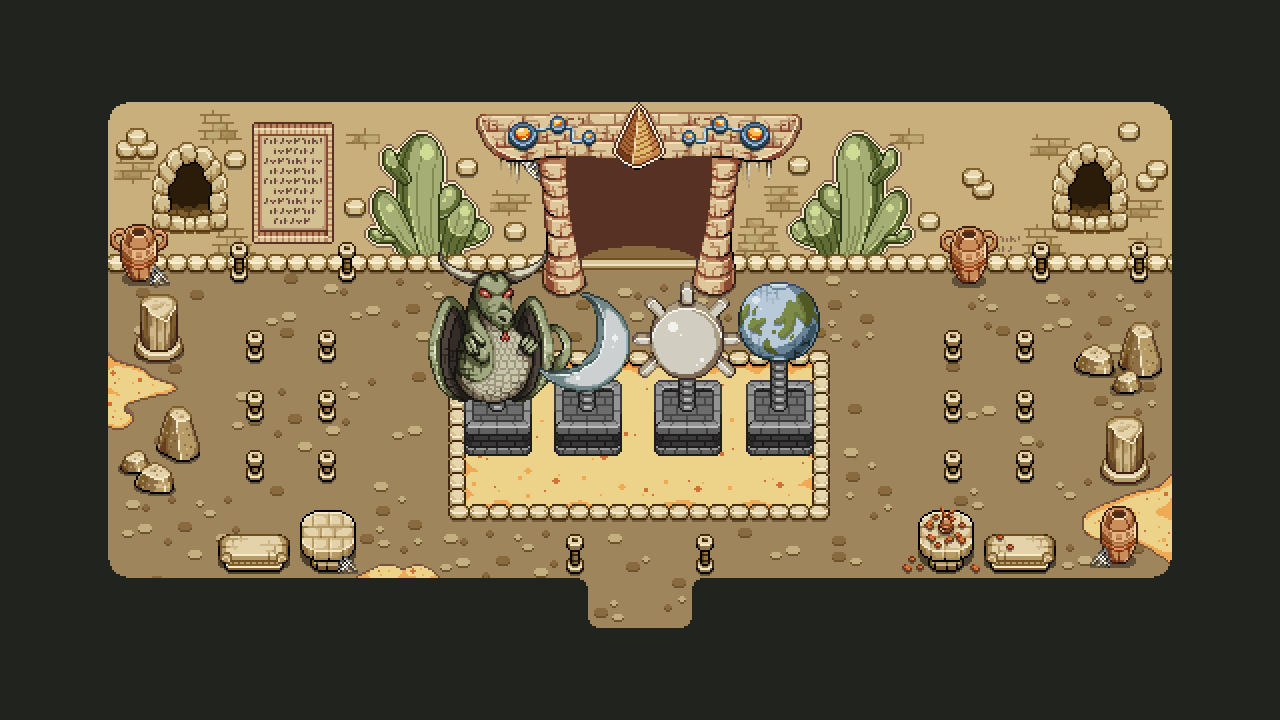 
Awesome work guys, I love what you are doing :D

I know that the update is coming when it’s ready and seeing the quality I couldn’t ask for more :). But I have an awful memory and I would love to replay the game a bit before the update ( just to remember all the sweet sweet lore :3 ) any chance you have a general idea on when it will happen?


The amount of detail you guys are putting into this game is absurd. This is the work of the 20-person SNES teams, except you are what, three people?


Will the next part of the story be released in chunks, or do you usually wait until the whole next area is complete before putting out the next version of your game?

I’ve never played Secrets of Grindea during the time when the story was being worked on, so I’m curious to how you do your releases.


@Davide: We’re not 100% sure exactly where we’ll cut the features/polish before uploading the frontline, so I can’t give a good answer yet!

The 1st update is by far the largest workload wise, but the 2nd can sometimes “feel” just as large (or larger) because it’s all playable content! For the 1st update much work has gone into making environment and NPCs, which improves the quality of the experience, but give very little extra play time in relation to work.

The 3rd update is stuff like adding all the new sound effects and usually polishing up a final layer of ambience.


@Theodore: no problem, thanks a lot for answering :)
Loving the updates, so excited for the feature of the game :3


@Theodore: Thanks for the information!

I think that’s a nice way of doing things and I’m anxiously awaiting the next chapter! Keep up the fantastic work, man!