Alright, let’s get back to that ghost ship. It’s about time I started making a few backgrounds for the place, so to start things off I’m going to make the very first room of the dungeon!

We have a pretty detailed sketch of what the first floor will look like, but as there are a couple of question marks in regards to sizing (there’s a boss battle and a puzzle that’s yet to be designed), this and one more room will be the only ones I’ll be able to make for this floor before heading on to the upper levels of the ship!

As the entrance room, this will give you your very first view of this dungeon and what’s to come. It has two levels, and you can only access the upper once you’ve made your way there through the floor: 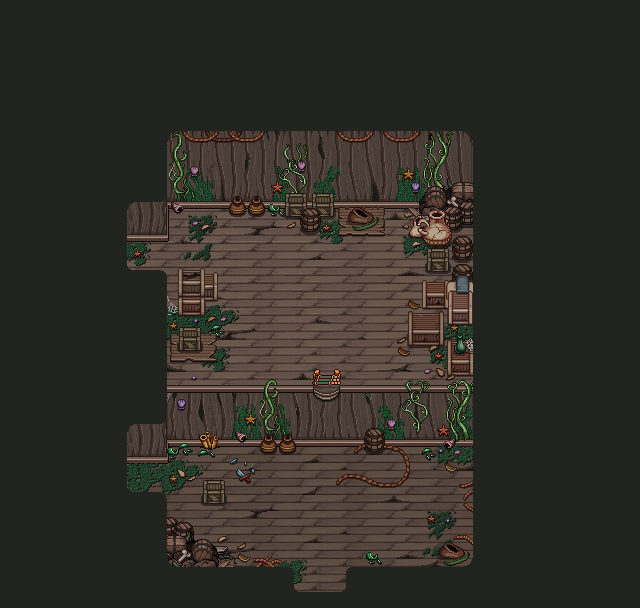 The second room will be a fight room! In other words, this is a room where you’ll battle a few of the ship’s enemies, and since it’s made just for that, the sizing isn’t hugely important – there will always be enemy setups that fit any sized room.

So, I went ahead with the mission to create a rather simple room where there won’t be a lot of things in the way for the players as they fight their way through:

And here we have the finished piece: 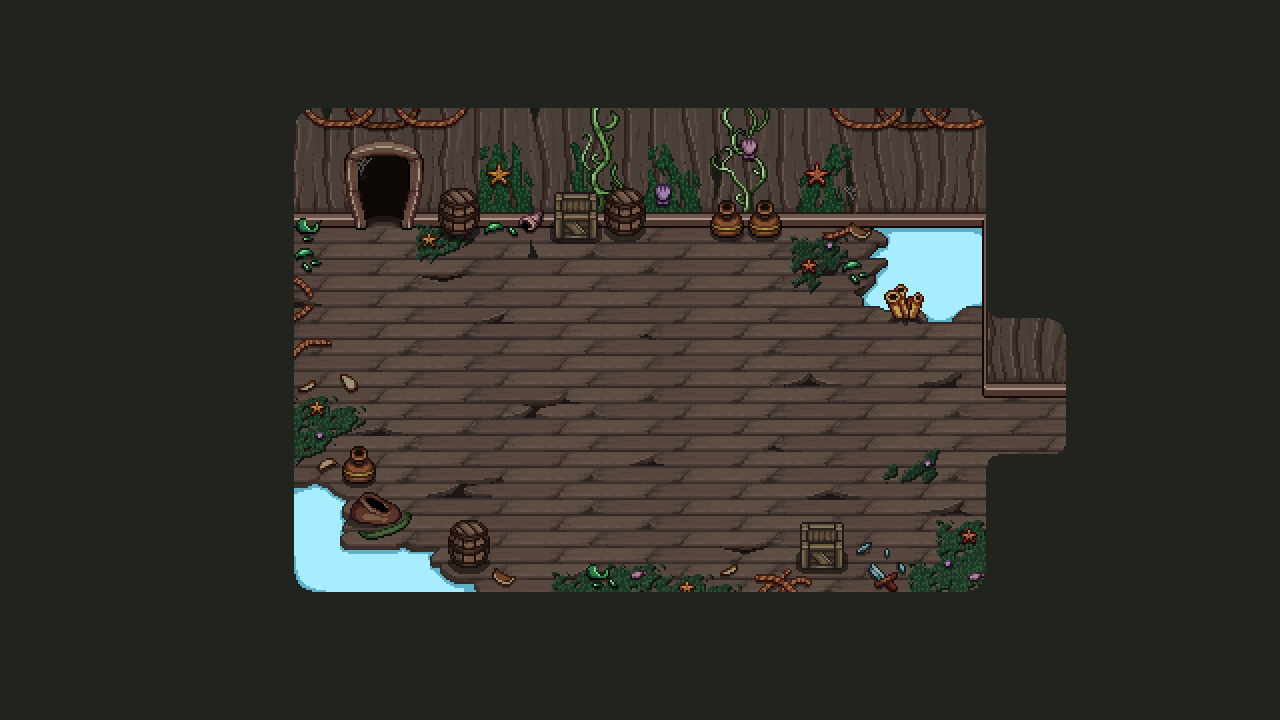 Once Fred finished his part of the desert, he’ll decorate the water and such as usual, so it’ll feel lively enough!

The portrait work continues as well, as there’s still a few needed. Now it’s time for the guards, which look similar to the previous guards in the game, but slightly edited to fit the desert. Sprite below:

In Evergrind city, the guards had large hats that covered most of their heads, while in Tai Ming they had very small hats. In the desert, they will have medium sized hats, and will go without their uniforms, sporting a bare upper body in order to deal with the heat:

The second portrait this week is that of a kid, living with her family in a hut in the desert.

The family has a bit of an issue with growing vegetables (it’s extremely difficult in the heat of the Dragonbone Dunes!), but luckily for her, her mother is an expert when it comes to growing carrots, which happens to be her favorite food.

Since I moved on to doing more and more Ghost Ship stuff, I’m sure a lot of you are wondering where the patch is. The answer to that is that Teddy and Fred are busy finishing up the possibly most time consuming part of each new update: the polish and cutscenes!

Because of this, the rest of the post is quite spoiler heavy, so beware! (also beware of the crappy GIF quality of some of these, haha)

Here’s a small collection of things they’ve been working on most recently, starting with a new cool effect for when you complete a math/enemy puzzle and the enemies spawn:

There’s an animation for when you complete another puzzle, causing the dragon to grab hold onto the globe and a door to open:

There’s this effect when the rock comes tumbling into the ancient decorations in the ruins:

And the spawning animation for one of the bosses, the Sol-Gem:

Each of these things have to be properly timed, have the right amount of effects (both in terms of animations and particle effects generated by the engine), and about a hundred other tweaks to make. For the Sol-Gem spawning alone, we’ve gone through about four different versions before settling for the version you see above!

Some might ask whether it’s worth all the time we spend on these details, but we’re all very convinced it is! I’d say these last percentages of the progress are the ones that matter the most, as the timing of a couple of animations alone can be what changes something from feeling lackluster to feeling polished and thought through!

Speaking of the patch timing, we finally have a rough estimate, where we hope it will be ready to be uploaded in 1-2 weeks! Let’s cross our fingers there are no more unforeseen delays happening until then :D


Very excited! Hope y’all got over your illness and such. The progress is looking great and I’m very excited to see what comes next.

Much love from Texas!,