Hey guys! Are you ready for the last post before christmas?! It’s actually christmas eve for us Swedes today, so at the moment you’re reading this we’re probably already eating some classic christmas food. We’ll be working between christmas and new years but the blog will go on its usual 2-week holiday break, so the next post will be available on the January 14th when there’s some new stuff to show!

And now, to add a sprinkle of creepiness, which will be the theme for the rest of this post… As you go into the spirit world you begin to see things, shall we say, a bit differently. Dark things appear, and some things may not be what you thought they were… And so on.

It’s a fine line here between going too far into spooky game territory and having just the right touch of spook, so we’ll see how things go with that.

Here’s a video featuring some of the creepiness in the making, anyway:

And the “finished” backgrounds (in fact, I’ll probably return to these and add more stuff later, cause it’s just too much fun making these creepy things up): 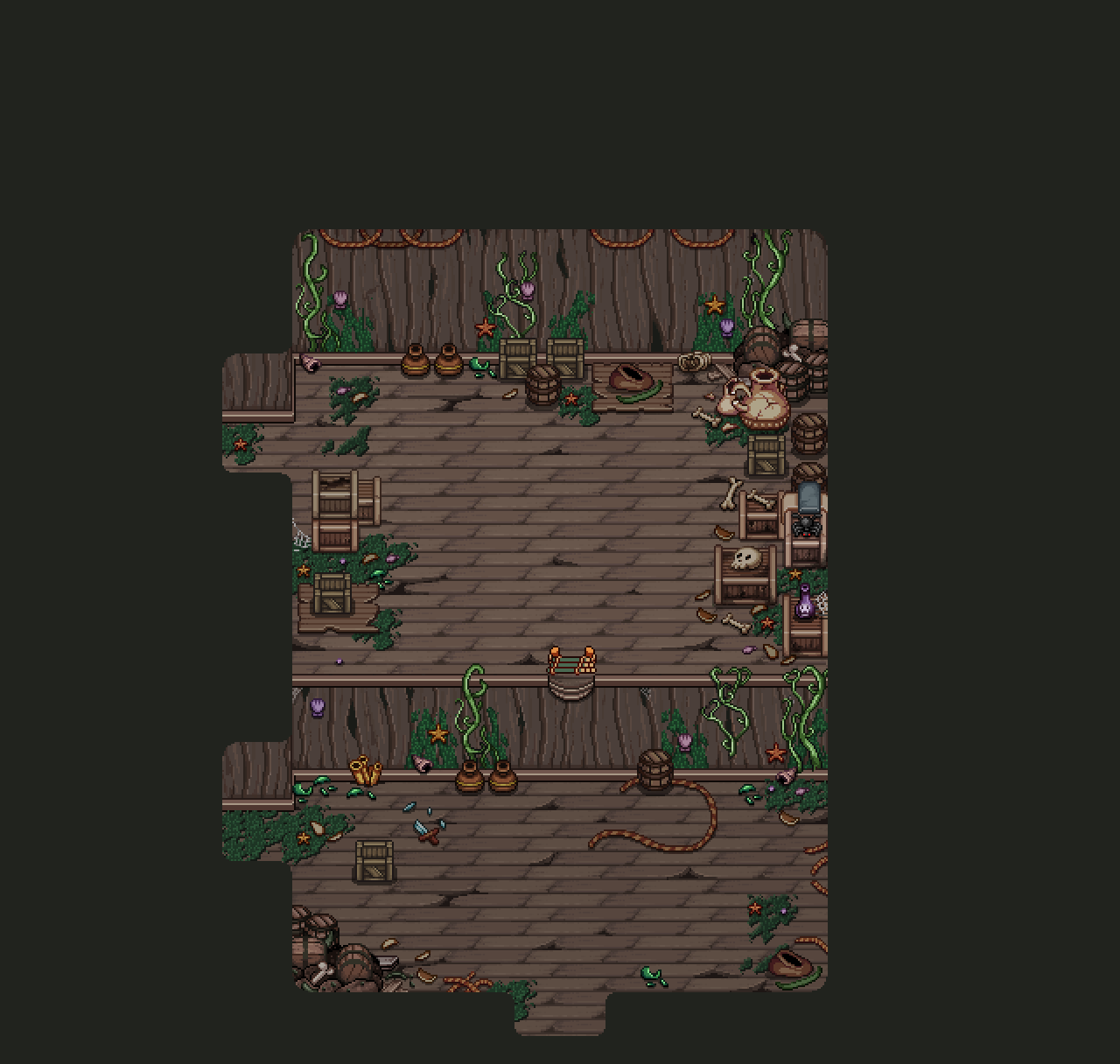 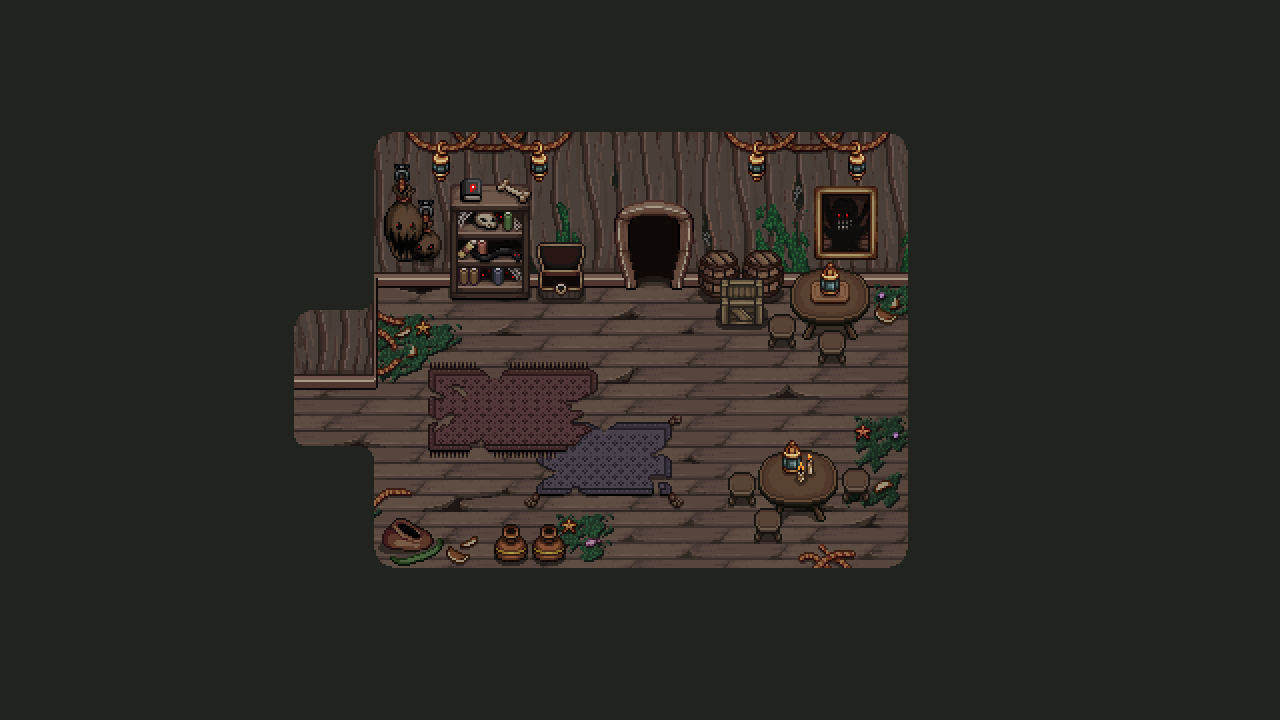 Next up, focusing on a single room. There’s skeletons, spiders, eyes, tongues, skulls, oh my! If you get any more cool ideas for creepy stuff to add, feel free to let me know! Some things will be added by Fred as well, and some of the things I’ve made now will probably get some sort of animation by him too. It’s gonna be a blast! 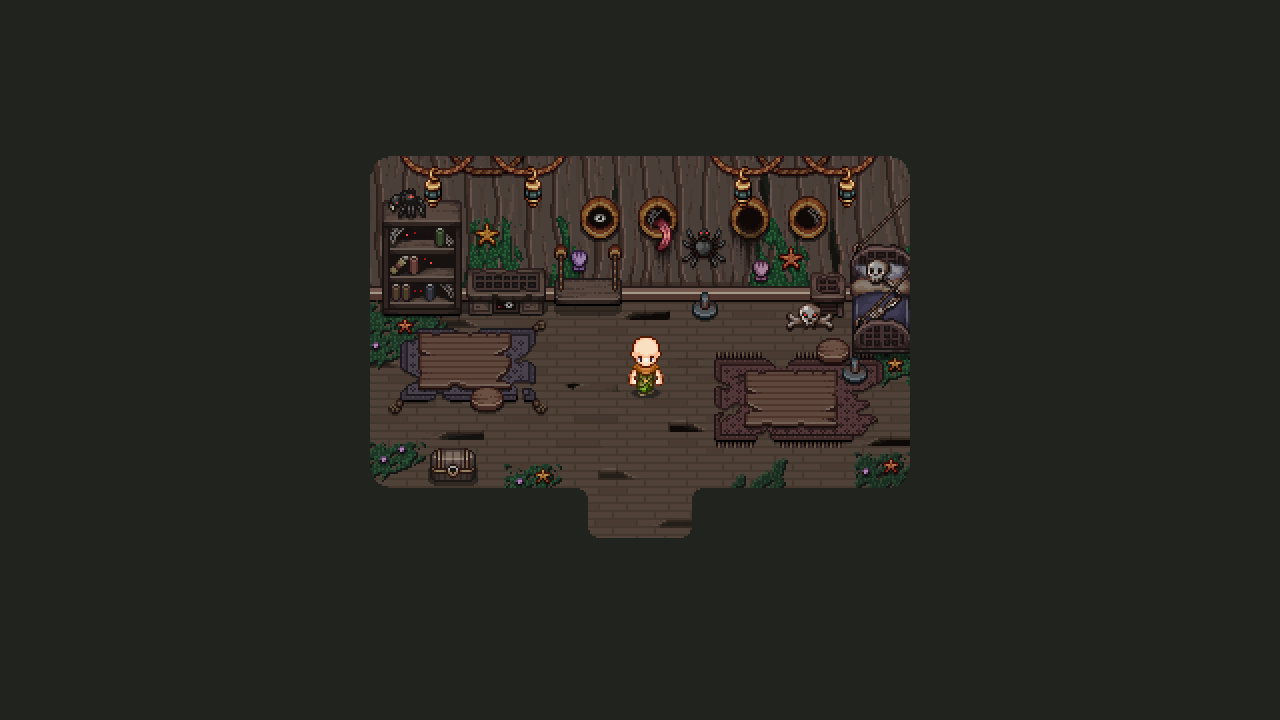 And here’s a third video, featuring the random battle room of the first floor:

Here I also played around with making the moss red and the water black, a theme I think we’ll follow in the rest of the rooms (including those I already finished). After I saved the image below I also experimented with making the vines on the wall darker and of a slightly purple shade, as well, which I think will add some bonus creepiness to the room as seen through the spirit world lens. 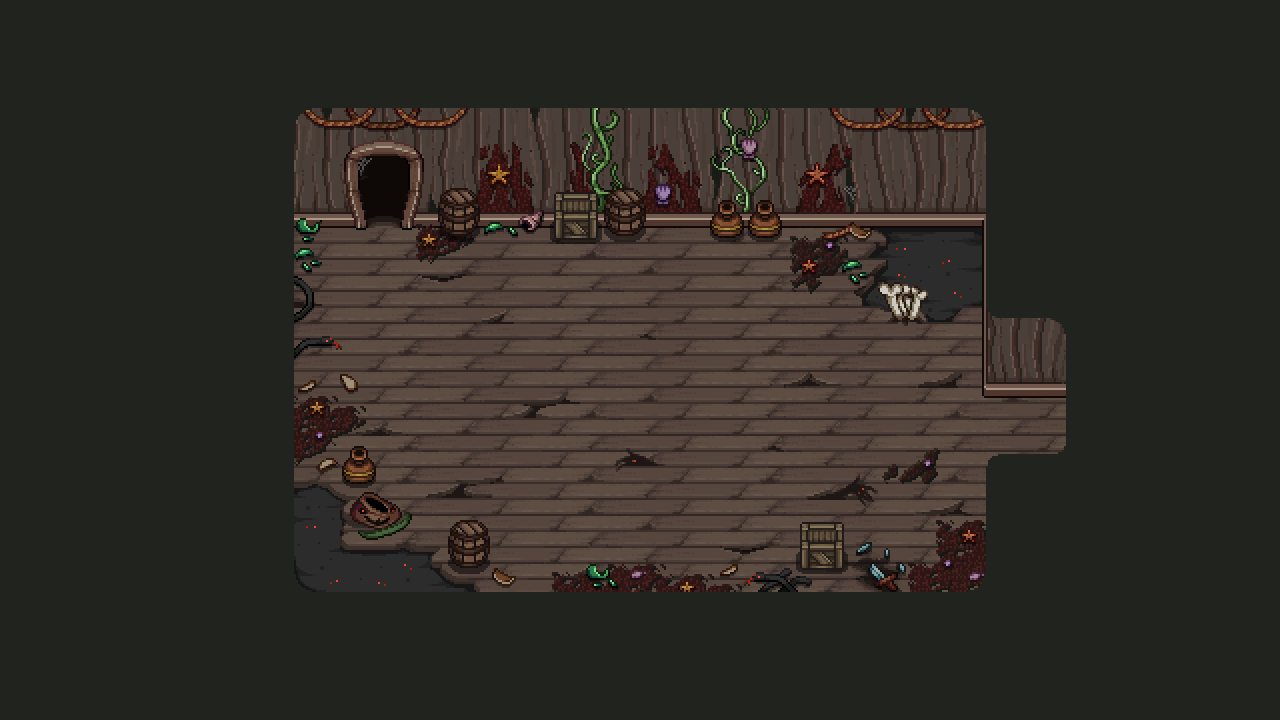 And here you can see those purple-shade vines for yourself, albeit in a different room! For this room I wanted to make more things seem ‘alive’. It’s a theme I want to use more for these spirit world versions of each room; things being ‘possessed’ or seeming to come alive (by getting a face, a mouth or eye/eyes). So I put strange faces on pretty much everything that’s a static piece of decoration such as the buckets and boxes (and the exit). That and more skeleton pieces, of course: 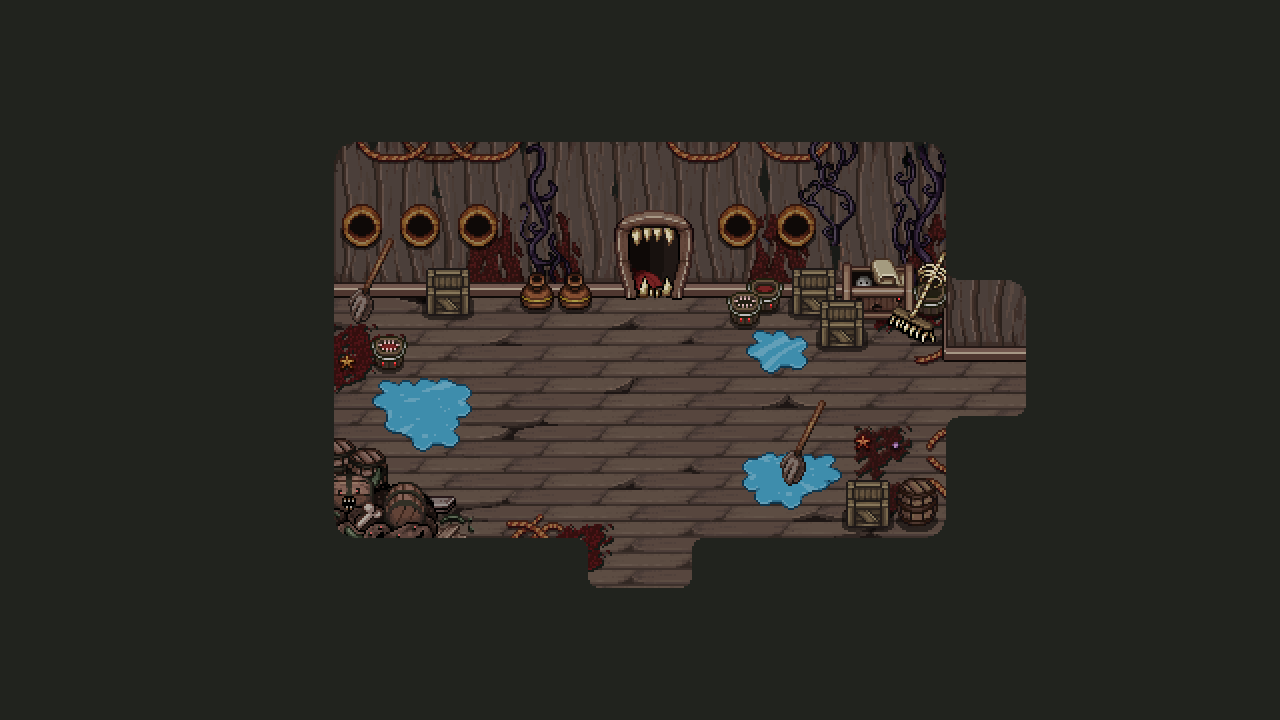 One more room and we can end this week with darkness from start to end. This room is the bunk room with all the beds, so it’s finally come to the point where it’s time to add all of those skeletons. I made a few in various positions, and again added some faces to random props across the room. Also, tentacles, because nothing says creepy ghost world like a set of tentacles, right? 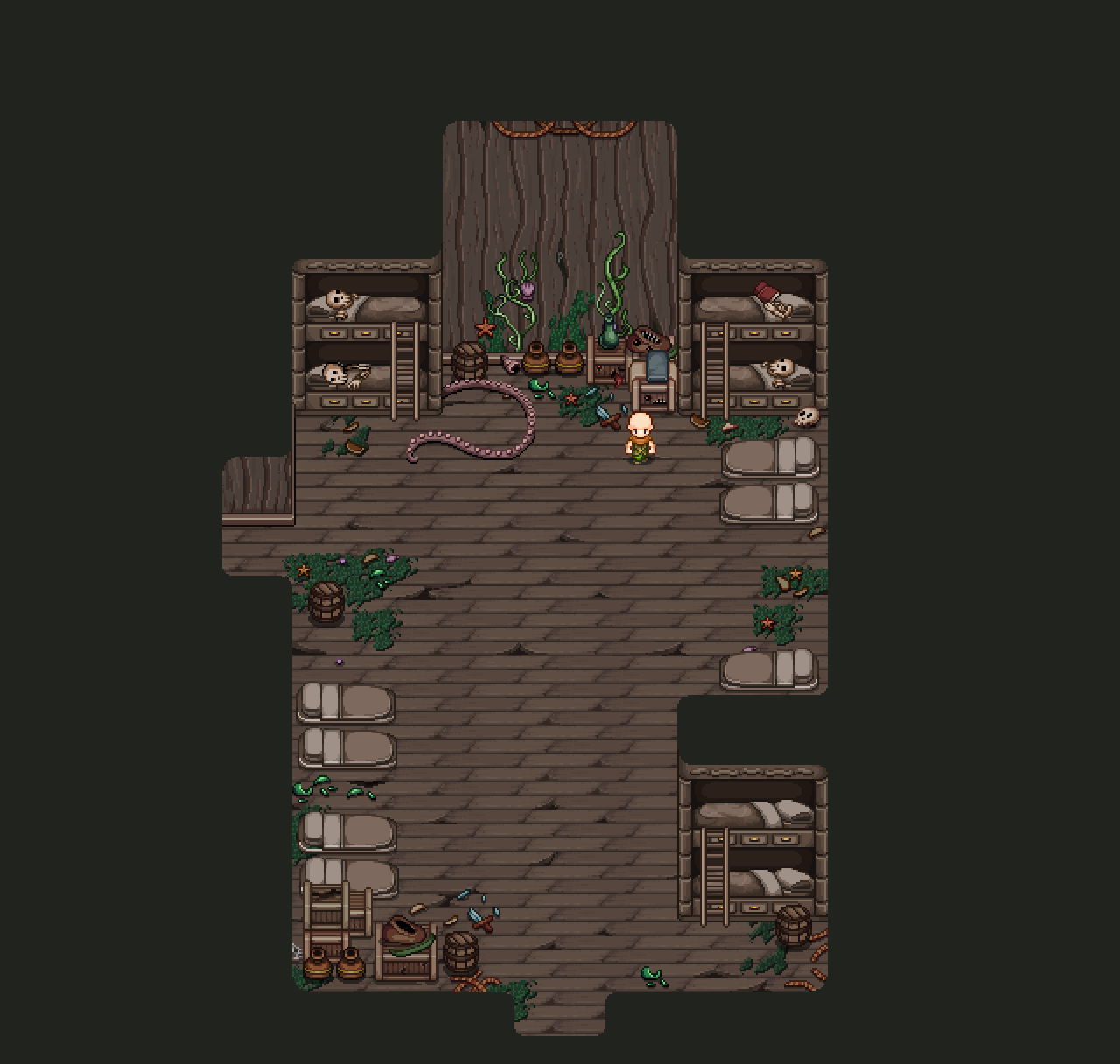 And with that, we at Pixel Ferrets wish you all merry holidays and a happy new year!


Merry Christmas and Happy New year guys! keep up all your great work and thank you for keeping up with the blog and patches throughout the years to us who have been with you early on!