In order to get a finalized and proper view of everything left to do for the game and to check in with each other a bit more frequently, we’ve recently decided we’re gonna have (more or less) daily meetings over voice!

During these meetings we’re going to discuss at least one of the things we’ve yet to properly establish until we know exactly all that is left to do and what we need to do to finish it up. This time, our main subject was that of books, how to present them, what books we’d like to add to the game, and so on.

In a previous post I made a new interface for books which is in the shape of an actual book, complete with the ability to turn pages. However, due to space limitations, Teddy is worried that there might not be a way to make such a book while still allowing a good amount of space for the text that needs to be in it. After today’s meeting we’ve decided we’ll at least give it a go, since we feel like an interface like that would look so much better than just a box (even if our fallback plan would be to at least make it look like a piece of paper, rather than the regular brown box). I’ll keep you updated with how our testing around works out.

In terms of books to include, we want to keep a decent balance between informative things that might make the player understand the world and how it works better with more flavourful things like tales of collectors from days gone past.

We want there to be a “quest” (not yet sure if it’ll be an official quest with it’s own quest tracker and everything) where you can find books around the world and hand it in it to the library to read it. And of course, once you’ve found all of the hidden books, you’d get an additional reward as well.

We’d also like there to be a series of book by Grindea’s top author Penn Wryte, so that you can find Part 1 early on in the game, and then continue to find parts throughout your journey, until you have the complete story.

Outside of all this book talk, we’ve also started to send out mails to all of you that supported us in the early days and bought one of the tiers where you get to design items or quests for the game! We expect it will take some time to settle some of the designs, and it’ll be easier to find spots for these additional items to be found before everything else has been finished up; hence it’s about time to get going :)

Now, a look at some of those new faces from the cutscenes, including a few that were only included once the Stable patch went life (if you haven’t played table in a while, now might be a good time to check it out!): 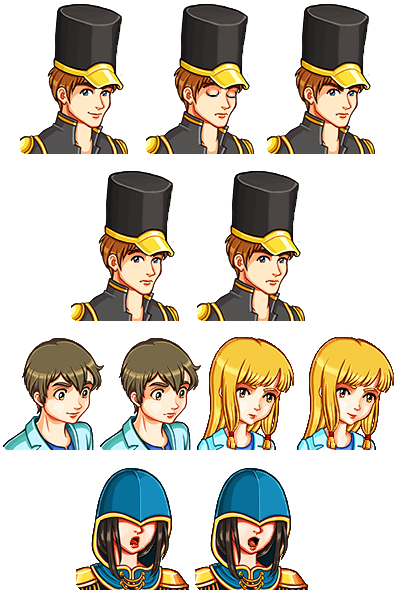 Now, for a much longed for update from Fred’s department! Because of the spoilery nature of nearly every animation he’s made for a long time there hasn’t been many updates from him, but you can view all of his progress in the update which should also be on stable in one of the coming days if it isn’t up already!

Now, however, as we move on to less spoiler-y things, such as the mansion in Evergrind South, we can start showing more stuff again! Here we have a few of the inhabitants of the mansion, starting with the butler (as well as a few options for how he’s gonna look in the end):

Our current favorite is the second one from the left! Which one do you prefer?

There’s also the long awaited(?) appearance of Marino’s father, sitting in his solitude on the throne upstairs:

On to the portraits! Marino’s dad is a character we’ve definitely all longed to meet (no? just me?), and for reasons unknown we’ve decided to be inspired by a famous video game character when designing him, with hints being both in the portrait and the sprite itself. Can you guess who?

And a look at the second portrait, that of the Butler:

With Easter now being upon us next week, and the Stable update released and ready, it’s time for us to take a week off to rest and gather energy for the next stretch of work: finishing up all the loose threads in Story Mode and adding some more quests! Final stretch soon, can’t believe it :)

As usual, the blog will be on pause during our holiday, but it’ll be back up and running on Monday the 20th! Happy Easter everyone, and stay safe out there!


What is a man? A miserable little pile of secrets!