So, we’ve been focusing quite a bit on Pins and Arcade these couple weeks, and you might wonder what our next step is from here. Our idea is that Teddy will finish up and add a ton of pins and get them polished and ready for a Frontline Patch along with the floor shortening and all of that sometime in the beginning of June – that’s about how long it’ll take for us to iron out all potential bugs and make it all work in multiplayer as well.

The remaining work is pretty heavily focused on the programming bits, so me and Fred will star working on something else, or rather, get back to where we left off before these Pins caught our attention: the Mansion! Once the mansion has been completed we’ll also add one or two quests involving its characters, and possibly some other bits and pieces for Story Mode before that turns into a Frontline Patch as well. In the near future, we’ll likely do an Arcade update here and a Story Mode update there as we work our way through these things we have left on our long list of things we want to add before the game is completed.

First up though, an expected Frontline Update around the first week on June, featuring the shortening of Arcade and around 100 pins for you to explore throughout your journeys in Arcade Mode! Hopefully you’ll like the variation they give as much as we have trying them out so far :)

The thing me and Fred will focus on next is the Mansion. I’ve already shown some sketches of the interior as well as some characters that will live inside its walls, but what’s the actual point of the building? Why, to house quests of course! Over the last couple days our daily meetings have mainly revolved around the quest(s) that will happen around the building, and have gone through a ton of suggestions. In the end though, we’ve settled for a specific questline, featuring Marino’s dad’s business idea.

As some of you may know, while you’re off in Mount Bloom and Tai Ming, Marino and his dad has been in the Merchant Isles for some kind of business trip. Now that they’re back, we’re deciding to bring in that business trip as part of a quest, where you’re tasked with doing marketing for a new set of gear they’ve imported and want to start selling.

The gear looks real fancy, but unfortunately its stats are horrible – it’s basically fashion items only. But to market the set, Marino’s dad wants you to do a publicity stunt in the arena – fighting a bunch of enemies using only the fashionable set from the Merchant Isle! Why you? Well, because the one who was actually going to do the fashion stunt, a famous and popular Collector, has unfortunately taken ill…

The idea here is that around the time you finish Tai Ming, there will be posters and such in Evergrind City featuring the famous collector (whom we’ll add as a side character that you can interact with and who will have been mentioned previously in the game), announcing the event in the arena. Shortly after the quest will become available in the mansion, where Marino’s dad will explain that the famed collector can’t do it but that you have enough popularity to do it instead. After this additional posters will be added to Evergrind, taped over the original ones, this time featuring your face!

The event itself will basically be an arena challenge where it’s your job to defeat a bunch of enemies using only the fashionable set (which will be force equipped and you won’t be able to change during the challenge). Succeed and you’ll get the reward, mess up and well… die… Oops :)

There will also be an additional quest earlier on in the game, which will be available around the time you first gain access to the mansion. We’re not entirely sure what that quest will be yet though, but probably something a bit more simple. Our idea with this bigger quest is to involve not only the mansion, but to give Evergrind City some additional sense of life, kind of like what we did surrounding the festival. We don’t want Evergrind to feel too static, but like a place where things happen and change :)

Now, time to dive back into that Mansion hallway!

Here’s part two, featuring a Solem statue and a little area to sit and have tea in the lobby, while waiting to meet whoever you’re here to see. Also, new and upgraded fountains (although we’ve talked about changing these around again and saving these particular ones for a different place – we’ll see): 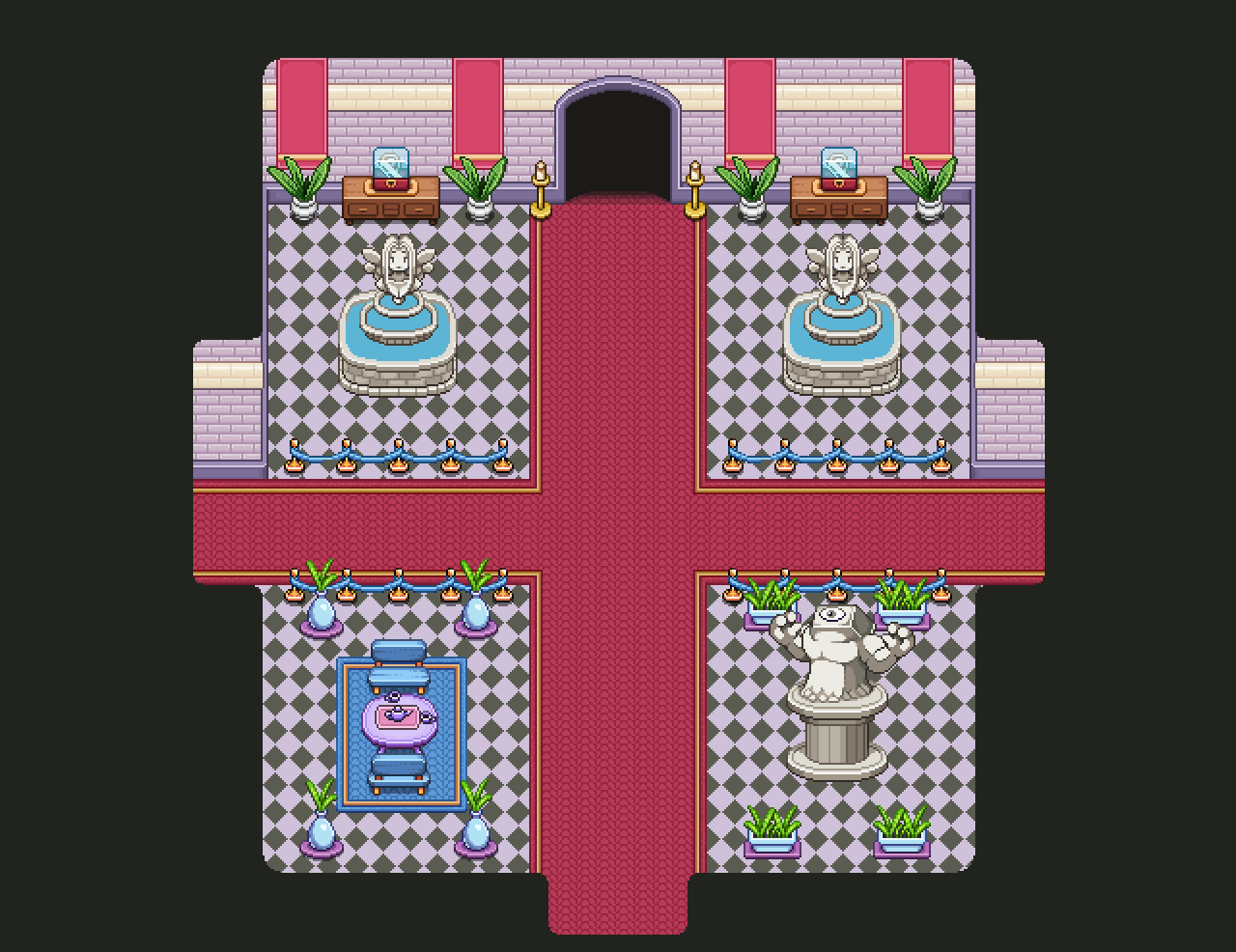 Next up it’s time to make the portrait for the famous James Fawke, the popular collector guy that so far hasn’t existed but whom will appear here and there throughout the game (though not as part of the main story)!

Meanwhile, Fred has been working on those fashionable items that look good but are of low quality and don’t do too much damage! Here’s the preview of two of them:

I will be working on making the rest of the set, adding some headgear and face gear as well :)

Fred has also been working on the possibly cutest thing in the game yet, a baby cloud that will be an effect of one of the Pins you can find in Arcade Mode:

Who else wants to go find that pin right now?!


I’m Japanese, I don’t speak English so I use a translation tool. I arrived at this game while looking for RPG. Looking at the development blog, I’m impressed, the dot painting is great. We look forward to seeing the game complete and better. I support you. With love from Japan.


Wow! I did not expect that many pins! Can’t wait to try them and check they really make me change my mind about my usual build for the Arcade! Cheers!