Hello guys! Tai Ming’s second zone is finally coming together: this week I (Vilya) have finally finished up the last backgrounds (except for the Puzzle Cave, which we’ll talk a bit later in the post)! Aside from a few fixes here and there, the backgrounds are now officially done for this area, and “all” that needs to be added now are a ton of NPCs, and of course, the cutscenes.. :)

Let’s take a look at this week’s main tasks:

I quit making the second zone’s outdoor transition from past to present around the HQ, as we hadn’t decided if the area needed to become bigger to properly house the Giant Thorn-Worm battle. Since we decided to keep things as they are, it was finally time to get a move on and finish things up!

First up is the area around the dam, where you can adjust the water levels of Tai Ming’s second zone. As with all other present versions, it’s time to demolish everything:

Next, the HQ itself, along with the yard in front! At this point it’s actually not 100% finished – I’m gonna break the wall up a bit so you can move through the left side in the next step (and in the future I might break the right corner a bit for visual effect as well: 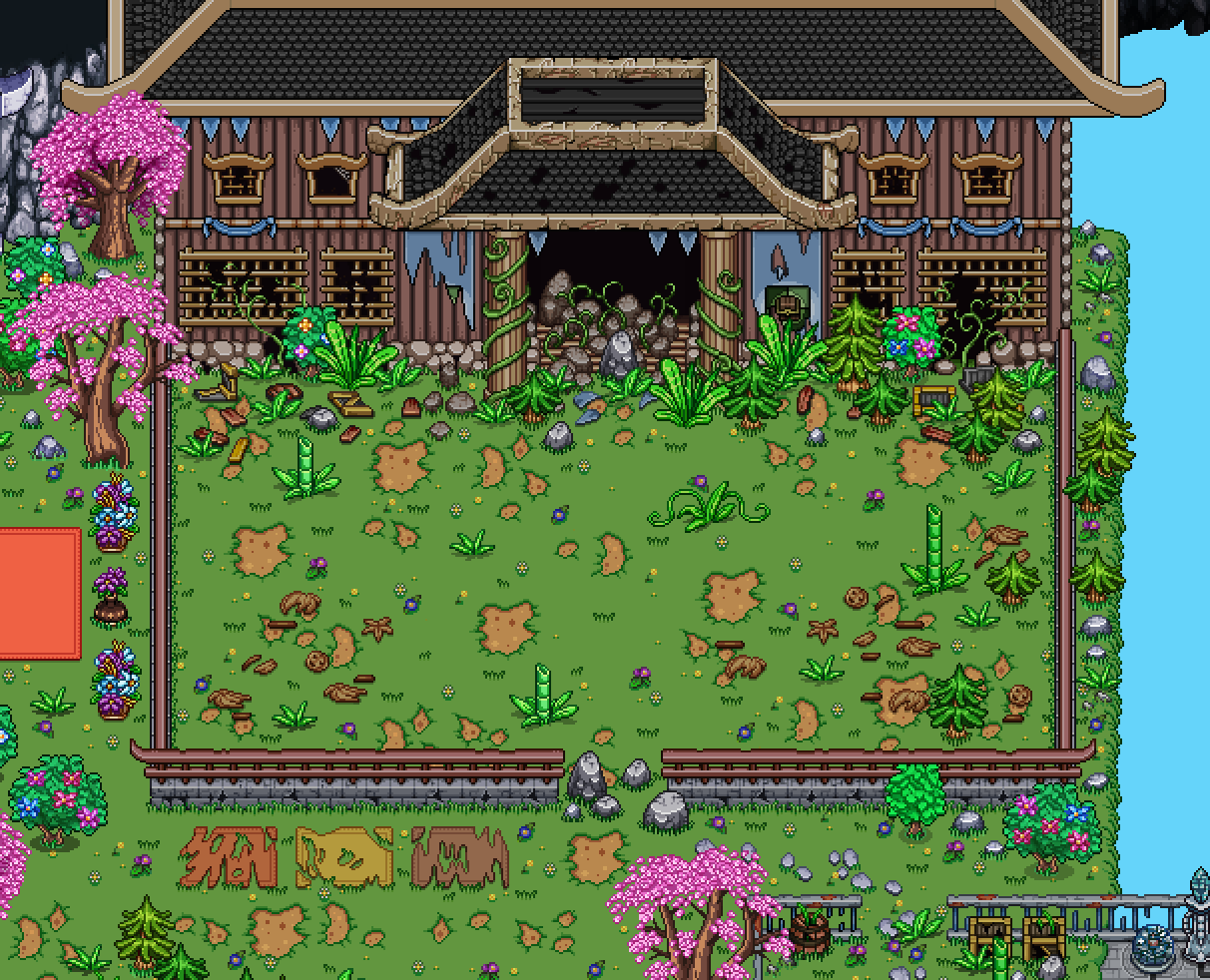 Finally, the area near the exit to the third zone! The main focus on this part of the job was the doorway to the third zone. In the past version, the door is open: here it needs to be closed, until you’ve gathered 3 emblems that activates the door opening mechanism. So, the emblems of the past needed to be removed, the door lowered, and some kind of ruin added to the whole thing:

In the end, I also had to add a ton of stuff in the editor to serve as colliders: this part of the area will be blocked unless you get here from the right time rift. Right not some of the items aren’t correctly sorted, but they will be once the game engine does its work!

It’s likely I’ll add more stuff here later if we feel like the blockade is too thin, but that will be in a future mixed bag update, in that case :)

Here’s the final result, for now: 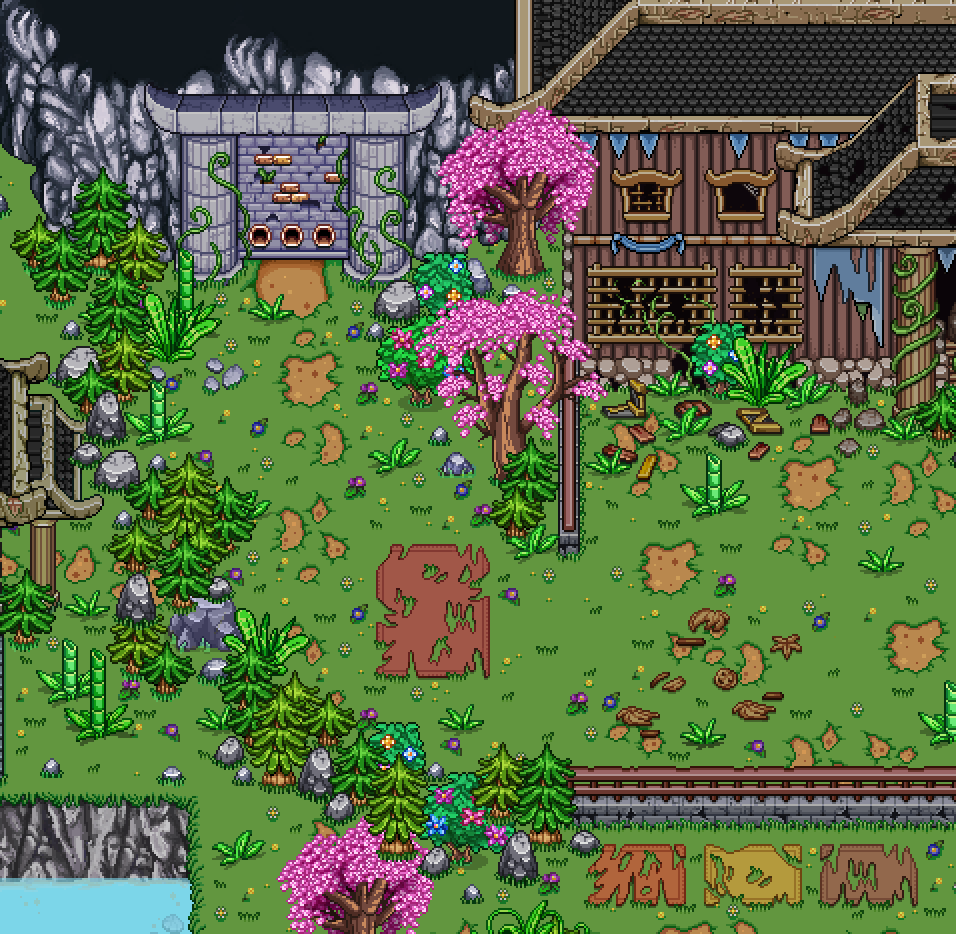 Meanwhile, Fred has been busy filling this area with the NPCs living here! Tai Ming has attracted all kinds of people, ranging from collectors, priests, merchants and bar owners! Some might resemble characters from the present: distant relatives, perhaps?

Now that I’m finished with my share of the Tai Ming 2nd zone backgrounds, it’s time to move on to something different: the puzzle cave in the north part of the map! We’ve actually made a very basic sketch of the area, which includes all the rooms and what you’ll face there.

Be aware of spoilers if you look at the map below or it’s explanation, if you prefer to explore the amusement park on your own: 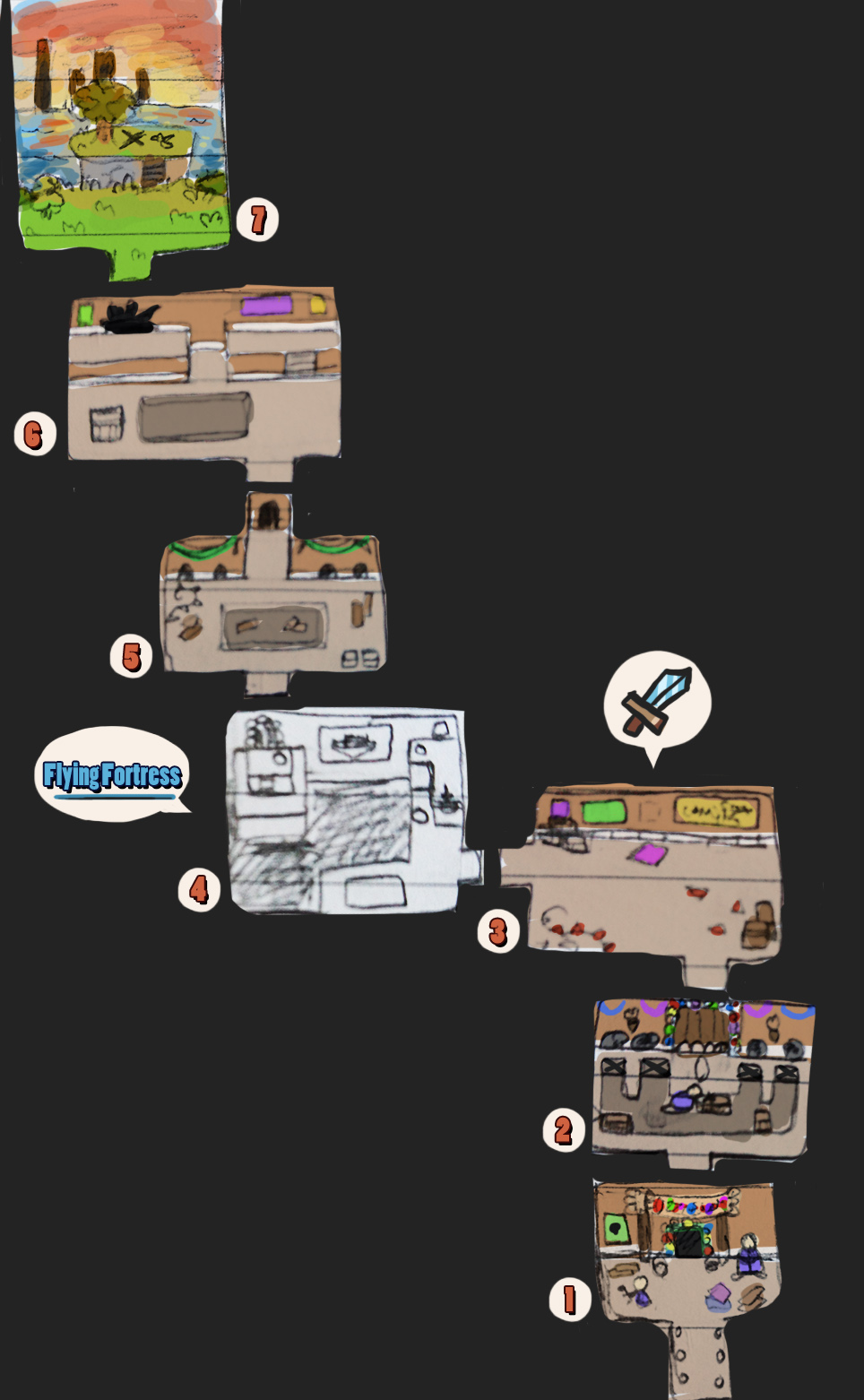 I already mentioned the rooms in a previous post, but now we’ve actually designed the rooms! The sketches above are very messy and basic, but they show in which order the rooms will appear, as well as and approximation of how they’ll look.

Room 1 is an introduction room where you’ll meet the owner of the amusement park and his workers.

Room 2 is the Ancient Statue Puzzle, where you’ll have to use statues get to Room 3, where regular battles will take place.

Room 4 is sponsored by Flying Fortress and features a Phase Shift puzzle (shown here), Room 5 is where the Monkey Madness takes place, and Room 6 is the “Path Puzzle” shown in the same post as the Phase Shift puzzle.

Room 7 is where you’ll find your mysterious treasure, as well as a hopefully fancy view! I both look forward to and dread making this map. Good thing I can make the other 6 first ;)

Next week I’ll start making the above rooms, while Teddy and Fred work on adding more NPCs and cutscenes to the village! In the next post we’ll take a sneak peek at what our plans are for the third zone as well, since we’re drawing ever closer to finishing this second part of the temple. Stay tuned! :)


Taking bets on whether or not this game is finished before we’re all too old and our reflexes are too dull to play this game anymore.


I really hope Tai Ming is the last or second last zone in the game. You cant treat your customers like this, shit’s been in demo stage for soon 3 years?
There sometimes comes a time when you got to think smaller.


@Niklas: After Tai Ming there’s a desert area with a corresponding temple, then a final dungeon.

We’ve tried to be as transparent as possible with the fact that we want to make Grindea the best game we can, and that we’ll put in the hours needed to get to that point – even if it means it will take a while before the game is finished. We’ve come this far, and we’re not gonna stop now :)

(If anything, I think we owe our customers a great game, not a decent or even bad game that just happened to be finished within a randomly set time frame.)


I agree with the admin. And it’s not like we’re waiting for the game to be released; we can already play it. Keep up the good work and thank you for your hard work.